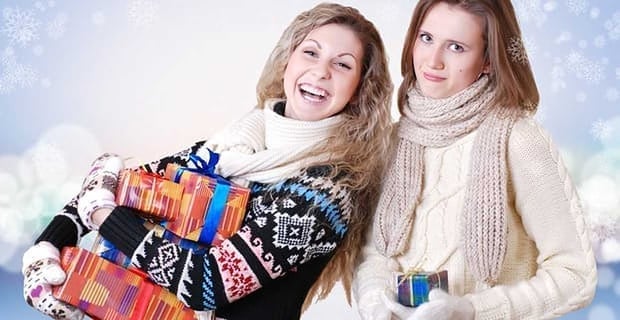 Holiday Shopping for Lesbians Who are Dating

It’s so exciting to be dating someone special when the holidays arrive. It’s all so much fun, but I’m going to share a few words of caution. It’s also easy to get carried away with presents and event planning with your new sweetie.

First off, if this is your first time celebrating the holidays with your sweetie, it would be good to discuss your plans and make sure you and Miss Right are on the same page.

If you’ve been dating a few months, then it’s quite all right to want to include your sweetie in your holiday planning.

If you’ve only been dating two or three months (that’s a few short weeks!), then things might be very different.

Are you both ready to spend time together during the holidays? Is it too early? Will it make things feel too serious too fast?

Maybe you’re both having such a good time and the energy is so good that making holiday plans together feels right, but that’s not always how things work.

I want to share a story about a holiday dating situation that didn’t go well.

Two women met in September, started dating and appeared to be getting pretty serious. Of course that was from the outside looking in.

As the holidays approached, there was the buying of presents. They had a conversation about how much to spend and how, though they were exclusive, they were still just dating so not to go overboard.

Well Christmas rolls around and the presents are revealed. One woman stuck to the agreement they made prior to buying presents. The other woman sort of lost her mind and went way overboard.

And by overboard, I mean she bought a motorboat, an iPad and a Keurig coffee maker as presents.

by giving a gift so over the top.”

Can you say oops?

But then the relationship took one of those unexpected but very bad turns, and suddenly they were taking a time out. Then they weren’t getting back together, and now there were all these expensive gifts that should never have been given in the first place and probably not accepted either.

There was a little bit of an incident with a big oil leak and a big bang from the engine while motoring around the lake. Then as the boat sat out in the sun, what had been perfect vinyl upholstery was suddenly cracked and splitting wide open.

The next report was the engine was absolutely no good and the aluminum had dry rot issues. The boat was well beyond being a safe vessel.

At this point, it was obvious the boat was a big lemon. Then it was discovered the trailer for pulling the boat had a broken axle. The boat was now stranded and there was no way to deliver it back to the gift giver.

The final chapter of that boat’s life is a number of men who apparently had title character roles in the movie “Deliverance” showed up and took the boat off my friend’s hands.  They also extended an invitation to a pig roast somewhere back in the woods near where we were staying in the China Lakes region in Maine.

We skipped the pig roast. As a bunch of lesbians, we thought it might be better to stick with our lesbian crew.

I still wonder, how does stuff like this happen?

Moral of the story.

It’s a great story about how not to buy presents when you are still just dating. Keep it simple. It can still be special, very special. But keep it simple and appropriate to where you are in your dating relationship.

Don’t sink your relationship by giving a gift that is so over the top the woman receiving it feels awkward and uncomfortable.

If you are early into dating an amazing lesbian, think about the gift you want to give her and ask yourself this question: “If we don’t last very long, will this gift be awkward for her to have and will I feel used? Will I want it back?”

Simple questions that can help you make a better decision. I believe any gift should be given with no expectation of it being returned. So shop with that in mind.

Have fun. Keep the gift-buying agreements you make with the woman you’re dating. You’ll both be happier in the short and long run.

Make it a Lesbian Holiday!

How to Get Through the Holidays with Your Girlfriend