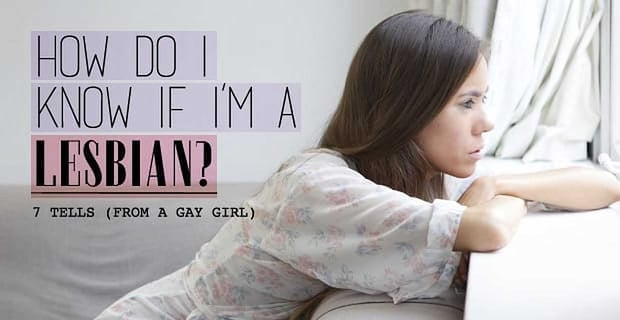 Knowing if you’re a lesbian or not is a personal matter, and sexuality/feelings can change over time, just like Alfred Kinsey, the creator of the Kinsey Scale, hypothesized. However, that doesn’t mean there aren’t any signs at all.

Here are 7 tells (2 truths and 5 stereotypes) that suggest you’re a lesbian — from a gay girl herself.

There is no lesbian wardrobe, walk, car, finger length ratio, or way of speaking to truly tell whether you or someone else is a lesbian. It all depends on the person, but, from my perspective, these are some common signs.

I realized I was gay when I fell for my best friend in high school. I used to hate sitting next to her and her boyfriend making out in the movie theater, and I would be like “I wish that was me.” Nothing ever happened, but it was when I decided I was attracted to girls.

I know I’m a lesbian because I have little to no sexual attraction to men besides Channing Tatum and Zac Efron. Let’s face it, though — they’re so pretty that they’re pretty much girls.

If you weigh heavily toward an attraction to women, then you’re probably a lesbian.

You just need to take the time to figure out how you feel. If you’re looking at women like society tells you you’re supposed to look at men, then you’re at least bi. If you have absolutely no sexual attraction to men or weigh heavily toward an attraction to women, then you’re probably a lesbian, but even that might not be the case.

When I first came out, it was as full-blown lesbian because, for me, it was an easier transition for my family, friends, and me to just get the truth out of the way as fast as possible. You have to have self-acceptance before you can feel comfortable making the decision to label yourself or tell others.

If you know for sure that you’re only attracted to women but aren’t sure how to go about finding that special someone, there are some really awesome lesbian dating sites out there that make jumping into the pool not seem so scary.

2. Your Instinct is to Identify With This Orientation

If you’re reading this article, you’ve already questioned your sexuality enough to the point where you’ve felt sexuality attracted to women to some extent. The truth is there is no standard way to tell if you’re a lesbian. It’s based on how you feel, and that can change over time.

5 Stereotypes About What Makes Someone a Lesbian

From TV shows to movies to songs, we’re bombarded almost every day, from every direction, with cues that suggest what lesbianism is and isn’t. Below I’ll take you through 5 qualities which hint that you’re a lesbian but are actually just stereotypes.

1. You Only Wear Plaid and Sneakers

Your wardrobe mainly consists of plaid flannel shirts and sneakers. You aren’t necessarily the butch lumberjack, but you buy plaid every time you see it. Your wardrobe is pretty much a bunch of button-up shirts, plaid or not, and high-tops.

2. Your Ring Finger is Longer Than Your Index Finger

Quite a few studies have found that when your ring finger is longer than your index finger, you’re most likely homosexual. This is pretty ridiculous to me, but whatever. Check out this article on finger length ratio because I’m not making this up.

You’ve always dreamed of a Subaru or some other SUV. You think cars are too compact and want something you can get dirty. I mean, Dana on “The L Word” had a Subaru, so all Subarus and SUVs have to be lesbian cars, right?

Dana on “The L Word” had a Subaru, so all Subarus and SUVs have to be lesbian cars, right?

4. You Have a Masculine Voice

Most lesbians speak with a more masculine tone or have a commanding presence. I like to call this speaking with purpose, which is not necessarily a bad thing.

Let me tell you, I’ve been on past dates where I saw the girl’s picture online and she seemed very feminine, but I hadn’t heard her speak. When she showed up in person, reached out to shake my hand, and then spoke, I just thought “so lesbian.”

The speaking thing isn’t a catch all, but it sometimes applies.

5. You Also Have a Masculine Walk

You’ve been told you walk masculine or have a masculine presence. The elusive “100-footer” is a woman you can tell is a lesbian from 100 feet away. This is supposed to be a joke, but I’ve totally seen it. Hey, if you’re a 100-footer, don’t fret. That just means you’re going to get more dates.

Stereotypes say if you have a masculine walk, you could be a lesbian.

Take some time to reflect and go out on dates. Go on some dates with women. Get online and get out there in the world. There is no pressure in trying things. See how you feel.

My First Time with a Woman