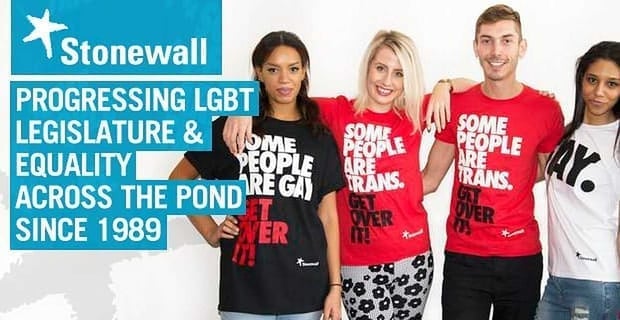 Stonewall: Progressing LGBT Legislature & Equality Across the Pond Since 1989

The 411: Through life-changing policy development, persistent lobbying techniques, up-to-date research, and more, Stonewall, a lesbian, gay, bisexual and trans equality charity, has become a leader in paving the way for LGBT rights in the United Kingdom, setting an important example for other countries.

From The Homosexual Law Reform Society to the 1961 film “Victim,” the United Kingdom has consistently been ahead of the game when it comes to the rights of lesbian, gay, bisexual and trans people, including same-sex marriage.

And for the past 26 years, Stonewall has played a huge role in this movement.

An LGBT equality charity based in the U.K., Stonewall is best known for its ferocious campaigning and lobbying strategies, working with a variety of organizations to address the concerns of and protect the rights of LGBT men and women in as large of a community as they can reach, as well as promoting new research on issues such as hate crimes, lesbian health and homophobic bullying in schools.

Communications Officer Matt Horwood gave us his expert insights on LGBT rights across the pond, how Stonewall ensures that these rights stay intact, ways everyone can make a difference, and their course of action for the future.

Besides the fact that homosexual couples could legally marry in the U.K. more than a year before their American counterparts, lesbian, gay and bisexual people have also been able to openly serve in Her Majesty’s Armed Forces since 2000, 11 years before those in the U.S. could openly serve in the military.

In terms of gender identity and expression, there are some differences as well.

The Parliament of the U.K. passed the Gender Recognition Act in 2004, which allows transgender people to change their legal gender. In the U.S., gender identity discrimination has been banned in employment and health care insurance since 2012. There’s also the Matthew Shepard and James Byrd, Jr. Hate Crimes Prevention Act, which expands on the 1969 federal hate crime law to include crimes motivated by a person’s actual or perceived gender, sexual orientation, gender identity or disability.

There’s an overall accepting atmosphere of the LGBT lifestyle in the U.K., but Horwood said there’s still a lot to be done to keep these men, women and youths from facing inequality in society, not to mention at home, work and especially school.

According to Horwood, 75,000 young people were bullied in schools for being gay in 2014, with 21,000 of those attempting suicide, and while teachers are aware of the bullying, they don’t feel adequately trained to prevent it, which is another way Stonewall steps in.

Thanks to The Report (2014), the charity is able to shed light on homophobic bullying in Britain schools and train teachers how to properly handle it.

The Fight for the Trans Community

No matter your sexual orientation or gender identity, Stonewall believes everyone should be accepted for who they are, and the work will reflect this message for years to come, with a major focus on creating campaigns that fight for trans people.

Stonewall believes everyone should be accepted for who they are.

In 2015 (after a six-month consultation with more than 700 trans voices), Stonewall, as well as its Train the Trainer program, became trans-inclusive and launched trans-inclusive health research. 2016 looks to be even brighter, with more resources and initiatives becoming trans-inclusive.

The team at Stonewall will also collaborate with the government and people of prominence to reform laws that negatively affect trans people, most recently backing a petition from Ashley Reed that prompts officials to allow trans people to self-identify.

“It’s important that all of this work is led by trans voices and experts,” Horwood said. “We’re currently recruiting a Trans Advisory Panel to ensure this is achieved in the most effective way possible.”

Making Sure Laws are Enforced

A huge priority at Stonewall is to ensure that what they do makes a difference in people’s lives in the short term and the long term — on a daily, weekly, monthly and yearly basis.

The Information Service program provides guidance to those who are facing discrimination by their employer, teacher, neighbor or anyone who might be breaking the law.

“We can advise on what’s legal and what’s not — and then signpost them on inclusive law firms and legal representation for them to approach for the next steps,” he said.

In that same vein, the Membership Program advises more than 800 organizations, from banks and health care providers, to universities and housing associations, on best diversity and inclusion techniques.

Besides these programs, Stonewall also holds two leading conferences every year to expand their reach and share their knowledge.

The Workplace Conference consists of brainstorming workshops among workplaces across U.K., and the Education for All Conference addresses homophobic, biphobic and transphobic bullying.

Thanks to Stonewall’s work, as well as the work of several groups and individuals, the organization has helped contribute to many significant political changes, including assisting in:

“We’ve seen laws that protect lesbian, gay, bisexual and trans people be overturned in the past, so we must not become complacent,” Horwood said.

How You Can Make a Difference

But Stonewall couldn’t have accomplished all of these great things on their own. It’s the relationships they’ve built with the public that have helped them get to where they are today.

“If you witness someone being harassed… take a stand.”

So if you’re tired of standing on the sidelines, join the fight against discrimination and prejudice with Stonewall. Horwood recommends educating yourself about LGBT rights in the U.K., including learning about the Equality Act. Being informed will give you the confidence to take a stand, not be a bystander.

“If you witness someone being harassed, bullied or isolated for their sexual orientation or gender identity (or any other protected characteristic), take a stand and do something about it. Although ensure you’re not putting yourself in danger,” he said.

Changing Hearts and Minds Around the World

So what’s next on the agenda for Stonewall?

“We hope… that LGBT rights and welfare remain on the social and political agenda moving forward.”

Besides lobbying for additional policy reform, Horwood said he and the team care deeply about changing hearts and minds by working with new communities and talking to new people as much as they can, which includes those across the pond.

“Stonewall will continue collaborating with human rights defenders around the world to support lesbian, gay, bisexual and trans people overseas. This work must also be led by the phenomenal campaigners based in those countries,” he said.

“Overseas, it was great to see the U.S. introduce same-sex marriage across the board,” he continued. “We hope it’s a sign for things to come and that LGBT rights and welfare remain on the social and political agenda moving forward.”

To learn more about Stonewall and the life-changing work they’re doing, visit www.stonewall.org.uk.