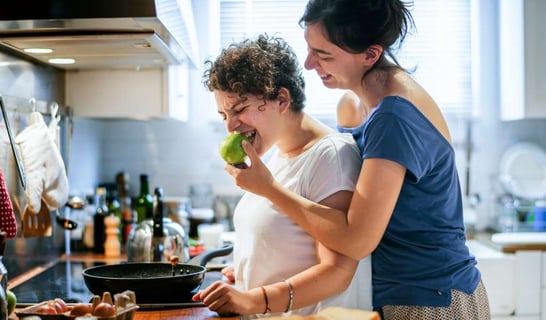 And if you’ve had sex already, you do think it’s serious. Right?

Yeah and that’s a big mistake.

So what’s that about anyway? It all seems so hot and fun and perfect in the beginning? Well it’s what happens as you get to know each other, and sometimes it happens fast and sometimes slow.

You meet an amazing and sexy lesbian. You actually hit it off. You connect and share numbers and she wants to see you. You can’t wait to see her again.

So you set up a time to have coffee, a drink or something to eat. It’s fun and full of laughter and you’re thinking, “Wow! How lucky am I?”

But do you also pay attention to what she’s saying? Do you really listen? Because everything she is saying has potential to be important information about whether this relationship can last or not.

You hear her say, “I’m not very good with commitments. I’m always canceling out on my friends.”

What? Is that important? Yes it is! It means she’ll set up stuff with you and cancel, and she’ll cancel often.

Then she tells you she hates to work out. She’s never done anything athletic or broken a sweat. Is that important? Only if its important to you to work out with your sweetie because this woman just told you she’s not that type of girl. So you are on your own with the workouts.

Maybe she mentions she’s just broken off a two-year relationship a week ago. Are you paying attention now? Don’t blow by this one!!

She’s raw and lonely and looking to fill the gap created by that breakup. Plus, if it was a really mean breakup and you’re sitting there telling her how sexy she looks or how funny she is, you are definitely making her feel a lot better. But she’s not dating material, my lesbian friend. Run away!!

So what you get is a rush of initial contacts and a playful, fun connection with this woman, but you’ll also get her being unable to commit and being wishy-washy about what she wants.

This is the kind of woman who could be back in the arms of her ex in a day or week or month. Tread carefully with your heart.

Then, during one particularly interesting conversation, she tells you she’s awful with communication, all her exes say she’s terrible about sharing what’s really going on, hates deep conversations and likes to keeps things on the surface.

This is the mistake I see woman making over and over

You’re not listening to what a woman says, and beyond that, you do not believe her. You’re fantasizing that she will be different with you.

When you take the time to be present, listen to what a woman is telling you and pay attention to her actions, you’ll start to recognize when a relationship should be over sooner rather than later.

I highly recommend that you end it earlier rather than later.

End things before you both get your heart and ego so entwined that it’s going to hurt badly. End it before you get so hung up with the sex that you can’t see straight. End it when her actions consistently show you that you are way more into her than she is into you.

And if that’s not the case and she’s more into you than you are into her, end it. You’re just leading her on, and it’s going to be a whole lot of hurt for her the longer you let it go on.

Finally, if it seems things really are working (your values click, your goals in life click and your lifestyles click), then keep at it and enjoy it for all it’s worth.

Hopefully 90 days out, it’ll still be that good (and nine years out, too).

When you stop playing games with yourself, you’ll know if a relationship needs to end early on and be the brave one to do it. Sooner is better than later!

Did She Break Up with You? Here’s What You Need to Do

3 Ways to Survive a Holiday Breakup

It’s Not You. It’s Me…and That Other Lesbian