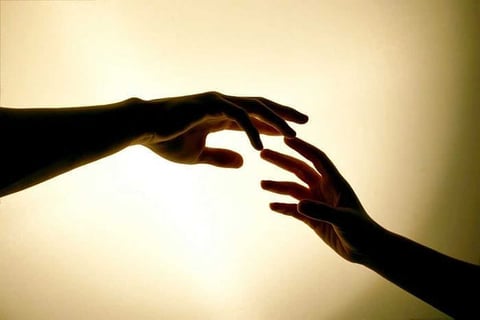 4 Reasons Letting Go is So Hard

Have you ever loved, cared for, supported or wished for a relationship with someone and it just wasn’t meant to be no matter how hard you tried? Made you someone you weren’t? Caused you to lose part of your soul in the process, leaving you empty-handed after weeks, months or even years of trying?

But why do so many keep hanging on when clearly the object of their affection just doesn’t feel the same way no matter what?

Raising my hand, like most others, I’ll admit being guilty of this. I’ve had failed relationships that I gave way too much effort toward while the bull horns blared and red lights flashed inside my brain.

I sometimes thought a little more effort, more displays of my caring nature, better romance or a spiffier wardrobe might do the trick. Maybe being more accepting of her religion, family and political values or even agreeing to attend a few more chick flicks, showing my feminine side, would flip her “love” switch on.

When I was younger, I thought women just wanted a faithful guy, one who made sure their needs were met and that would be enough. But guys, the world of love just doesn’t work this way, and if the mutual chemistry isn’t there, it just isn’t there.

I’ve learned from my mistakes, believe me, taking several trial-and-errors and being hit over the head enough times to get it right.

But why do so many keep going after the ones they know, deep inside, aren’t a healthy match? What makes people keep returning to the same painful relationships whose histories are riddled with disaster instead of moving on to healthier living?

It’s human nature to fight for what we want and to never quit, especially in the love department. Like the saying goes: “The heart wants what the heart wants.”

That stated, here are a few points that are major in understanding why letting go is so difficult for so many:

The reluctance to move on and face the dating process is enough to keep us all holding on for dear life.

When you leave a relationship, everything starts over, and lots of us hate change. You have to go out, possibly join a dating site, be social, weed through the prospects, maybe drag yourself to the gym again, begin the exhaustive getting-to-know-each-other period again, yada-yada. A new chapter in your life commences.

Don’t let that fear of the unknown make you settle for less than your best.

You’re afraid of never finding another like the one you just left. She was comfortable, definitely not perfect, but at least she met some of your needs. And you thought for the longest that was good enough.

But don’t let that fear of the unknown make you settle for less than your best. After all, respecting yourself and having enough self-esteem to go out and get what you want will make you better and happier in the end. Best of all, your future partner will appreciate you for it.

2. You both thrive on drama, attention or power

This goes along with settling and being comfortable with less. Perhaps your relationship gives you that emotional high you crave.

Maybe you enjoy the stress and highs and lows of being with the one who drives you crazy. Or possibly you’re on a power trip and have complete control over her and like it. You may not truly be in love, but as long as you’re there, you can say and do whatever you want and get away with it, satisfying many of your needs. This isn’t healthy, particularly if violence, alcoholism or drugs are in the picture.

In my opinion, these types of relationships can be toxic and should end, but if you’re the stronger partner, it’ll be up to you to finish things and seek a better balanced arrangement. Counseling could also be warranted in this situation.

Guys all have egos, and we, at one time or the other, think we’re God’s gift. While looking in the mirror, we grin and ask, “Why wouldn’t anyone want this?”

Guys all have egos, and we, at one time or the other, think we’re God’s gift.

But we love a challenge and sometimes think the love connection will come if given more time. The truth is if months or even years have passed and things aren’t growing, it’s time to move on and take one for the team. By letting her go, you’re doing both of you a huge favor and letting that chip on your shoulder shrink just a little.

This doesn’t refer to your lack of trusting another person. It’s about not trusting in life and believing that going in a different direction is what’s best for you in the long run.

This said, there are two choices to be made: You can choose to let go of the past and trust life will take you where you can be truly happy and fulfilled. OR you can stay where you are and not trust, remaining stuck in your suffering.

If you want the woman of your dreams, you have to trust in yourself and not settle where you are. After all, you and only you knows what you really want in another person.

And if you’re pressing on day after day not growing together, don’t be one who wakes up 50 years later asking yourself the common question, “What if?”

Perhaps the biggest points to be made here are these:

Are you caught trying to end a relationship but just can’t? Leave us a comment below.

Can a Past Relationship Affect a Present One?

My Girlfriend Has Lost Interest In Me