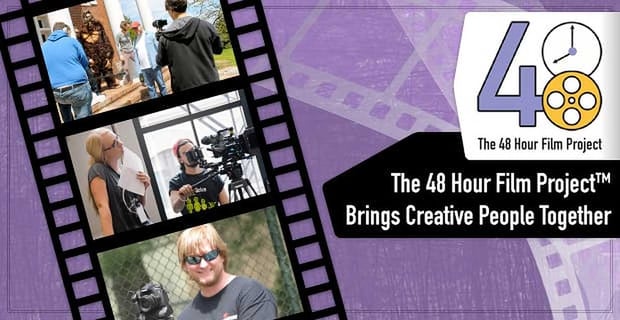 The 48 Hour Film Project™ Brings Creative People Together in an Invigorating, Fast-Paced Challenge

The Short Version: On your mark, get set — action! In one whirlwind weekend, the 48 Hour Film Project gives filmmakers, screenwriters, and actors a chance to team up and compete to make the best original short film. Filmmaking teams start from scratch with only a random genre, prop, line of dialogue, and character to guide their efforts, and it all culminates in a screening and awards ceremony where prizes are given to the top short films. The 48 Hour Film Project encourages teamwork and comradery between creative people who love filmmaking, so the contest is ideal for singles looking to meet like-minded and fun-loving individuals. Whether you walk away with an award-winning film or a lifelong bond with someone special, it’s sure to be a memorable weekend.

In 10th grade, my English teacher gave us a choice for our “Crime and Punishment” final: either write an open-ended essay or create a film interpretation of the book.

Easy choice for my friend group. Three of us were in drama club, three were tech-savvy, and one was extremely bossy, so everyone had a natural part to play both on and off camera. I wrote up a script, and my boyfriend volunteered as prop master — mostly because he wanted to smear ketchup on my face for my death scene.

From hastily picking out costumes to yelling at each other for forgetting a line, we weren’t the most disciplined filmmaking crew ever, but we ended up with a hilarious bloopers reel. To this day, we still laugh over the jokes, mistakes, and awkwardness that came from making “Crime, Punishment, and Trampolines.” We were already close friends, but that project brought us even closer. If your work styles mesh, making a film together can be a great bonding experience.

The 48 Hour Film Project (48HFP) gives filmmakers the opportunity to band together in the name of creating a work of art from start to finish. The contest’s participants have just two days to script, shoot, and produce a short film. Submitted films have to be between four and seven minutes long and must include certain required elements such as an assigned line of dialogue. Through the challenge, like-minded people come together and share their passion for film.

Established in 2001, the 48 Hour Film Project is the oldest and largest filmmaking competition in the world — with a total of 40,000 films made by imaginative people. The two-day project fosters teamwork, creativity, and even some romance. Whether you’re single and looking to meet new people or a couple looking to enrich your relationship, the project welcomes everyone up for a filmmaking challenge.

“We started the 48 when Mark Ruppert and I were making films,” recalled Liz Langston, Executive Producer of the 48 Hour Film Project, “and we found the process so invigorating that we wanted to share it with other people.”

Singles Can Meet New People in a Weekend-Long Competition

The 48 Hour Film Project puts filmmaking teams under a tight deadline to test their skills and artistry. If you want a way to get active and meet a bunch of people who share similar interests, you can’t do much better than this popular contest.

According to their website, the “wild and sleepless weekend” is hosted by more than 140 cities in countries around the world. Over the years, teams have produced thrilling, entertaining, and thought-provoking films in more than 900 competitions. Many participants return each year to enjoy the company and competition of local film-lovers.

Amateurs, professionals, and people of all backgrounds can join the project. A jury of professionals (producers, film critics, and other filmmakers) awards prizes for the films that have the best directing, best actress, best music, best use of required elements, and other distinctions. Each city’s overall winner of the Best Film will be screened at the annual Filmapalooza event and awarded a trophy.

“We host these events to encourage and support filmmaking,” Liz said. “Our filmmakers are very inspired by being part of this community.”

The 48 Hour Film Project has seen teams as small as one person and as large as 116 people (and 30 horses) come out to make a short film. If you need help finding team members, official Meet-n-Greets will get you socializing in no time. “The Meet-n-Greets are a great way for people to get to know each other in a friendly environment,” Liz said.

Go online to find your city and mark your calendar for the event near you. You can form your team prior to your city’s official 48HFP weekend, but no other advance work is permitted.

2. Friday: Pick Your Genre From a Hat & Start Writing!

At the weekend’s Kickoff Event, teams pick their genre out of a hat, and the City Producer announces the prop, line of dialogue, and character required to be in all submitted films for that city. Immediately after the kickoff (usually held on a Friday at 7 p.m.), the Official Time Period begins, and the teams get to work.

3. Saturday: Bond Together As You Work Under Deadline

Full of adrenaline and fun, the project pushes filmmakers to see how creative they can be. For 48 hours, participants write, rehearse, shoot, and edit their film. “Usually teams will write it on Friday, shoot it on Saturday, and edit it on Sunday,” Liz said.

“It was a blast,” said Walter Bro, a participant of the 48HFP. “It was crazy, it was exhausting, and it was energizing.”

Saturday is usually when the bulk of the legwork is done. Teams pool all their passion, wit, and skill to produce shorts covering all genres from horror to science fiction. You never know what your team will pull out of the hat, so filmmakers often have to think quickly and rely on one another to make it work.

Submissions are due at 7:30 p.m. on Sunday. All films submitted Sunday will be screened for a live audience, but late films won’t be eligible for all prizes. An audience vote is cast at the city’s premiere screening (both on-time and late films are eligible), and various prizes are handed out.

Each city’s overall winning film will screen at the end-of-the-year celebration, Filmapalooza where filmmakers gather to celebrate a global community of indie creativity. The global winner receives $5,000 in cash as well as a trophy. The best of the best — judged on artistic merit, technical merit, and adherence to the assignment — will be sent to the Cannes Film Festival.

After rushing to the drop-off event on Sunday, an official celebration gives participants a chance to blow off some steam that evening. If your city doesn’t have a party planned, you can always throw one of your own. After working their tails off all weekend, most teams could probably use a little downtime.

Behind the Scenes: Over 15 Marriages Have Come From the Contest

The 48 Hour Film Project encourages a tight-knit community of artistic souls. There’s nothing like adrenaline and prizes to endear team members to one another. In pursuit of a difficult goal, new friendships are forged and old relationships are reinforced.

“If you’re on a filmmaking team with people, even people you don’t know, you’re in an intense situation with people for an entire weekend,” Liz said. “That sort of closeness really helps people get to know each other.”

Not only have some participants gained skills and recognition to start promising careers, but some even found romance along the way. Below is a heartwarming video of one Des Moines participant using the project as the backdrop for his own real-life romance:

To cast your own love story, connect with filmmakers in the 48 Hour Film Project. You never know what could come out of it.

“Quite a few 48HFP participants have moved to Hollywood for a new career in film,” Liz said, “and I’m guessing that we’ve also had at least 15 marriages come out of the 48 Hour Film Project.”

Their Dedicated Team Fosters a Global Community of Artists

The 48HFP team is spread out around the U.S., providing a steady framework for filmmakers in over 140 cities. Most of the staff are also filmmakers in their own right. Their mission is to encourage a community of artists who continually create, imagine, and grow.

Hundreds of City Producers support local filmmakers before, during, and after the competition. Staff members are typically passionate and knowledgeable film-lovers who have participated in the 48HFP in years past.

As a local resource, these individuals offer insight along each step of the competition. They can even play matchmaker and introduce new participants to some of the regular teams or stand-out talent in the area.

“The 48 Hour Film Project will always have a special place in my heart,” said Adam Kassel, City Producer in Las Vegas. “My hope is to bring the same fun and unique experiences to those eager to participate.”

Liz told us that some City Producers have even found love through the project, connecting over the excitement and intensity.

The 48 Hour Film Project: Where Shared Passion is Part of the Game

Shooting a film is an inherently collective activity, so it naturally inspires tight relationships. My own brief stint as a teenage filmmaker was full of laughter, pressure, and bonding. Even though we’d been friends for years, working together put us in an entirely different mindset and taught us to appreciate each other’s diverse talents.

The filmmaking environment is uniquely intimate and friendly, which is particularly useful to daters.

The 48 Hour Project invites creative people to spend more time doing and less time talking. Filmmakers use this weekend to get engaged, network, and work together on a short film. Every year, the world’s longest running filmmaking contest lets participants showcase their talents, make an unforgettable memory, and build lasting friendships — all in two days!

“Shared passion is a wonderful thing,” said Liz. “There’s nothing like getting together with friends and working hard, and at the end, you’ve got something really special to show for it.”