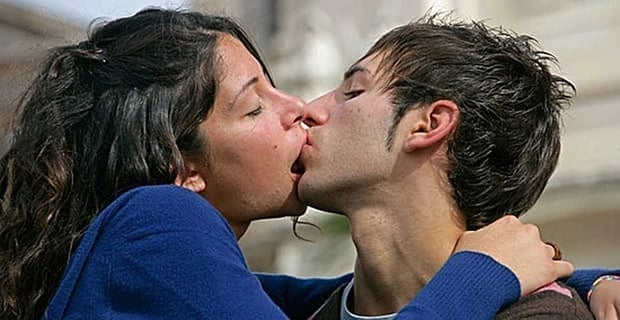 The other day I read an article by the Stupid Cupid Bloggers titled “The Worst Things a Guy Can Do When Kissing a Girl.”

Since I am the bad boy of the dating game and a man who has kissed hundreds of girls, I can tell you firsthand that kissing women is something that is not difficult to do.

I felt I had give my critique of the article and tell guys what they really need to do when they are about to kiss a girl.

1. Kissing in a public place

Stupid Cupid thinks it is a bad idea to kiss in a public place.

Stupid Cupid says, “We’ve all had dudes move in for the kiss in high-traffic locations and we were all horrified by it. Of course, it’s not always possible to be completely alone, but a dimly-lit street corner or front stoop is perfect.”

Mr. Locario says: Most of the time if a woman is “horrified” or not comfortable kissing you in public, it is usually because she is not comfortable in her own skin and cares too much about what everyone around her thinks, which is a sign of immaturity.

Another reason could be she is not really that into you. Do you really want to waste time with a woman who is immature or who is not really into you? I’m assuming you don’t.

If you are with a mature woman who is into you, she will kiss you in public. You don’t have to wait until you are on a dimly-lit street corner or front stoop.

Stupid Cupid says, “Paying attention to the mood and general atmosphere of the date will help set the stage for something romantic rather than comically inappropriate.”

Mr. Locario says: I actually agree with Stupid Cupid on this one. Sometimes you need to be able to read the energy between you and the girl you are with.

If she is crying because she received some bad news from a phone call, that might not be the best time to kiss her.

3. Using too much tongue. Or lips. Too much anything, really.

Stupid Cupid says, “We know you’re attracted to us. We know you’re excited. And that’s hot! But the mechanics of a kiss are important, and a general rule of thumb is to keep it simple, especially in the beginning.”

Mr. Locario says: On the surface, this sounds like good advice, but saying things like “the mechanics of a kiss are important” make it seem as if kissing a girl is something that is a difficult process you need to learn.

People generally aren’t bad kissers. A kiss is usually good depending on the chemistry between the two people who are kissing, so a bad kisser to one person might be a good kisser to another.

I had a friend who dated this guy who would sometimes slightly bite her lower lip on purpose when they kissed. At first she thought it was strange, but she actually started to like it.

The point I’m trying to make here is don’t think too much about how to kiss when you are kissing a girl. Just do it.

“Take it from a guy who has kissed

Stupid Cupid says, “Slow your roll, guys. There’s plenty of time for copping a feel later. If things go well, a first kiss can definitely lead to a full-blown make-out session (or if you’re lucky, even more). If that happens, feel free to get…touchy. But during that first time, it’s a good call to focus on the kiss rather than feeling someone up who you met an hour ago.”

Mr. Locario says: You should always get touchy with women you are flirting with.

This does not mean you grab a woman’s breasts or butt, but you should do things like touch her hand and put your hand on her waist. This is to see how much interest she has in you.

Once she is close to you, go in for the kiss and start feeling her up. If she is really into you, she will not mind that you are feeling her up, even if you met her only an hour ago.

5. Waiting too long to make a move

Stupid Cupid says, “Our general rule of thumb is if things are going well, go for the kiss by the end of the second date. A first date kiss is not required, but by all means, if you’re feeling it, go for it. The thing is if you wait too long, we’re going to assume you’re just not interested.”

Mr. Locario says: Never wait until the second date to kiss a girl. Always do it on the first date. You want to find out as soon as possible if this girl is into you.

Just because a girl is on a date with you doesn’t mean she is into you. She could just be using you for attention, but most girls will not get physical with a guy they are not into.

It is in your best interest to kiss her on that first date so you don’t have to waste time on a second date with a girl who might not be that into you.

I want to thank the Stupid Cupid bloggers for writing their article. I had to write this one to give the male perspective.

This means they will tell you how they want you to act when they want a kiss, but they don’t necessarily tell you what to do to make them want to kiss you.

Take it from a guy who has kissed a lot of women, all you really need to do is go for it and the women who want you will kiss you back.

Mr. Locario has been featured on VH1, FUSE, The Dish Network, TLC, ABC Family, The Tyra Banks Show and Anderson Cooper. He has also written for FlaglerHill.com, Singles Warehouse and the Fort Green New York Times Blog. What separates Mr. Locario from other relationship gurus is his no-nonsense, realistic approach to the dating game and the game of life. The idea is to give men and women the knowledge, truth and confidence to understand what they want, thus helping create the best options for themselves in love and in life. Mr. Locario’s dating advice is accessible through online videos, blogs and his website. He is also available for individual support and counseling. In addition to his relationship analysis work, Mr. Locario is a rap artist and actor. In 1996, he founded the entertainment company ITAKKS Inc.. For the last 14 years, he has and still performs under the name of “Trends” in New York, California, Florida and New Mexico. He was also featured on TV stations such as ABC Family Network, MTV and VH1 – and magazines such as Rolling Stone, Blender, Source and Vibe.

The Worst Things a Guy Can Do When Kissing a Girl

Should I Ask to Kiss Her?