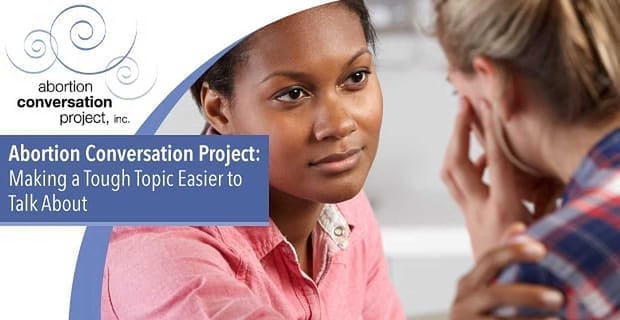 The 411: With 15 years of expertise under its belt, the Abortion Conversation Project provides funds to innovative people and organizations that strive to destigmatize the topic of abortion and encourage speaking and listening with respect and dignity.

There’s no doubt that abortion is a polarizing subject, but the Abortion Conversation Project (ACP) works to make that subject easier to talk about, even, or especially, when your beliefs are different.

Launched in 2000, ACP offers small seed grants to individuals and grassroots groups that have the same vision: to support social change that will reduce the stigma around abortion or any other reproductive health decisions.

ACP offers small seed grants to individuals and grassroots groups that will reduce the stigma around abortion.

“It is an ongoing conversation to be able to have more people, have more places that are safe and non-judgmental, have the kind of conversations that create societal change,” said Terry Sallas Merritt, founder of Connections Consulting and President of ACP. “We see the dire need to expand these safe places for people to share their stories, thoughts and concerns and to reaffirm their moral, spiritual and heartfelt decision-making process.”

Tools to help make the best decision for you

From sponsoring public forums that bring diverse groups of people together, to developing informational handouts, creating workbooks, such as “Pregnant? Need Help?” and “A Guide to Emotional and Spiritual Resolution After an Abortion,” ACP is there to provide support every step of the way.

“We talk about ways, in our guides, workbooks and website, how to begin those kinds of conversations, how to feel out what might be a safe place to be able to talk about those kinds of decisions,” Sallas Merritt said.

The folks at ACP also spread the word about passion projects of their grantees, including Emily Letts’ groundbreaking YouTube video of her own abortion.

“There are more conversations now, whether they’re taking place online, in your community, at your kitchen table or on television shows and in movies,” she said. “We look at connecting and building a broad community of people who are dedicated and committed to breaking down the stigma and reaffirming women and their own moral authority to be able to make such a fundamental decision about parenting or not parenting at this time.”

The Abortion Conversation Project is committed to eliminating the stigma of abortion by supporting individuals and small groups engaged in innovative projects that create new ways to talk about abortion honestly and publicly.

It’s collaborations like these that are really the backbone of ACP, bringing abortion into the light in a way that’s welcoming to everyone — those who are directly affected, those who are not, those who courageously put their opinions out there and those who need more time to do so.

“We salute and support them, and we also salute and support those who may need to come along more slowly,” Merritt said. “For some people, having conversations in their particular community, whether it’s their church, household, group at school or even their book club, may not feel comfortable because they may feel like they will get shamed, judged or shunned.”

According to Sallas Merritt, it’s all about taking small steps that stop perpetuating silence and encourage listening and understanding.

“When the conversation comes up and you hear that stigma language, you don’t want to let it hang in the air. You can say ‘For me, I would not assume I could make this important decision for anyone else but myself,'” she said. “This is what being pro-choice is all about, respecting the moral authority and capability of people to make these decisions. I think even if you are not comfortable sharing your story, you can be comfortable sharing the universal idea of respect and dignity.”

Building a community of stigma-busters

For the future, ACP will continue funding cutting-edge projects and forming relationships with researchers, professionals, legislators, reproductive justice groups , bloggers and everyone who shares their mission, a community of stigma-busters, as Sallas Merritt says.

“We have a wealth of experience on our board and many, many talents, so people come in with an idea and we can help them develop that idea,” she said. “The world of women and people reclaiming their autonomy and moral authority, their right to respect and dignity is growing, and we will be growing and supporting this much needed social change.”

To learn more about the Abortion Conversation Project and join the fight to end stigma and judgment, visit www.abortionconversation.com.