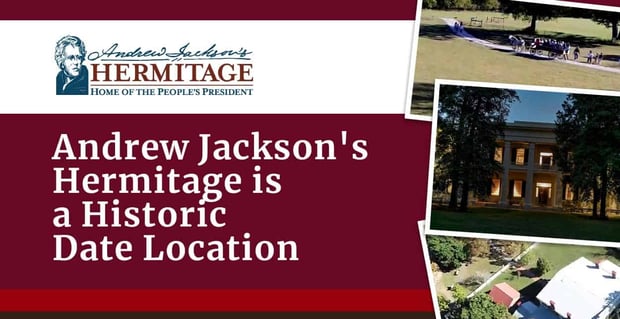 The Short Version: Andrew Jackson’s Hermitage is a national landmark that invites Americans to discover the man behind the legend of Old Hickory and the People’s President. Located on the outskirts of Nashville, this 1,120-acre site includes a mansion, a museum, 20 historic buildings, and the burial place of Andrew Jackson and his family. History buffs can take a date on a tour of the old home of the seventh U.S. President and come away with a new appreciation for a bygone era.

President Andrew Jackson took a remarkable journey through history. He volunteered to fight in the American Revolution at age 13, was captured by the British, and became an orphan soon afterward. Years later, he found better fortune in politics, climbed the ranks in the military, and his ambition eventually took him all the way to the White House.

During the War of 1812, Andrew Jackson became a decorated officer famous for his temper and his victories. He was the original straight shooter in American politics, and he continues to capture the hearts and imaginations of many people studying American history.

The Hermitage was home to three generations of Andrew Jackson’s family in Tennessee.

President Andrew Jackson earned the nickname “the People’s President” because of his down-to-earth Southern spirit. So it makes sense that his family home in Nashville has remained open to the people to this day. Andrew Jackson’s Hermitage pays tribute to his life and legacy by telling his story and inviting people to see his home.

Andrew Jackson bought the Hermitage in 1804 and lived there sporadically until his death in 1845. He and his wife are buried in a garden on the grounds.

After the president’s grandson Andrew Jackson III moved out in 1893, the mansion and land became open to public viewing. The 1,120-acre property was named a National Historic Landmark in 1960.

Today, Andrew Jackson’s Hermitage is one of the largest and most popular presidential homes in the United States. It features the restored mansion and gardens as well as 20 historic buildings, archaeological sites, field quarters, museum, and other exhibits on the life of Andrew Jackson.

For more than 130 years, the Andrew Jackson Foundation has dedicated its resources, knowledge, and creativity to preserving the Hermitage and educating visitors about the people who lived and worked there.

“We want people to get a better understanding of a leader who shaped our young nation’s future,” said Ann Dee Jones, Vice President, Marketing and Communications. “Andrew Jackson’s Hermitage is proud to be one of Tennessee’s top historic sites. No visit to Nashville is complete without seeing the home of the seventh president!”

The Hermitage opened as a public museum in 1889, and over 17 million people have visited it since then. Its visitors range from students on field trips to retired couples on vacation. People of all ages and backgrounds can enjoy touring this national landmark and learning more about Andrew Jackson’s life.

Whether they’re stopping by for a date or a family outing, people can immerse themselves in American history by touring the mansion and its grounds. The peaceful gardens and rolling Tennessee hills can offer a lovely backdrop for a romantic moment, so it’s not unusual to see couples strolling down the paths, looking at the exhibits, and enjoying their time together.

The historic mansion, gardens, and grounds can offer a window into the past while on a date.

Every year, the Hermitage sees more than 230,000 visitors who come from all over the country and the world. Some of these visitors have read biographies written about President Andrew Jackson, while others only know what they’ve learned about him in school years or even decades ago. It doesn’t take a history degree to appreciate the significance of this landmark and the beauty of the land itself.

“Visitors get a better understanding of a leader who shaped our young nation’s future,” Ann Dee said. “And with 1,120 acres of natural beauty, just walking around the property makes for a unique way to spend the day.”

Andrew Jackson’s Hermitage is considered by historians to be among the most well-preserved homes of an early U.S. president. Its public exhibits provide a glimpse into life in the Jacksonian Era between the American Revolution and the Civil War.

From the groundskeepers to the education team, Andrew Jackson’s Hermitage has a passionate and knowledgeable staff members who work together to make history come alive.

“Our staff consists of people with many different backgrounds, interests, and experiences,” Ann Dee told us. “You will find one common trait among us all: The desire to tell the story of The Hermitage so that we can inspire the next generation of leaders.”

The Hermitage typically offers a busy calendar of educational opportunities and public events. In addition to its exhibits, the education team can host homeschool days, field trips, and fun activities for school classes, clubs, and other groups.

Specialty tours are popular among visitors who are from out of town and have a thirst for knowledge. The VIP Tour includes an expert-guided look at the mansion, the grounds, and Andrew Jackson’s grave. The tour ends with a wine tasting of five wines from Natchez Hills Winery.

Adult couples are welcome to visit the Hermitage’s on-site tasting room to purchase a glass or bottle of wine and take it onto the grounds for a picnic. Talk about a fun date activity!

The Hermitage runs tours and events that give visitors insight into Andrew Jackson’s life and deeds.

“We have held a community arts and music festival each fall for the last six years,” Ann Dee said. “Every year on January 8th, we commemorate Jackson’s leadership in the victory of the Battle of New Orleans with free admission and events.”

During the coronavirus pandemic, Andrew Jackson’s Hermitage has had to cut its hours, cancel events, and limit tour sizes, and all that has taken a serious financial toll. The Weathering the Storm campaign was established in 2020 to help the nonprofit organization stay afloat during this difficult time.

The Hermitage team has planned a phased reopening of the property to keep all staff members and visitors safe. Its temporary guidelines include a mask mandate for all visitors over 13, unless they are walking alone or in a family group out of doors.

Looking to the future, the Hermitage will take its cues from local leadership in deciding when it’s safe to reopen completely and allow people to once again crowd its exhibits — hopefully with more engaging tours and experiences available.

“As we look to and plan for the future, having more opportunities for learning and displaying more of our collection will be a major focus so that we can grow as individuals and as a nation,” Ann Dee explained. “We are committed to doing our part to end racism and create a unified nation for all citizens.”

History books portray Andrew Jackson as a gray-haired veteran with a penchant for speaking his mind, but that isn’t the whole story. Even if you’re not a big Jackson fan, it’s worth learning more about his roots as a scrappy orphan and frontier lawyer in Tennessee. You might end up seeing the People’s President in a new light and better understand his continued influence on American ideals.

Andrew Jackson’s Hermitage gives couples the opportunity to take a stroll through history and learn some interesting facts about the seventh President of the United States. The sprawling historic site has plenty of outdoor spaces and indoor exhibits to explore, so it’s an ideal date destination for couples seeking an afternoon activity in Nashville.

“One of the pillars of our mission is to educate,” the Hermitage team said. “When visitors leave with knowledge that they did not have before coming to our site, we consider that a job well done.”