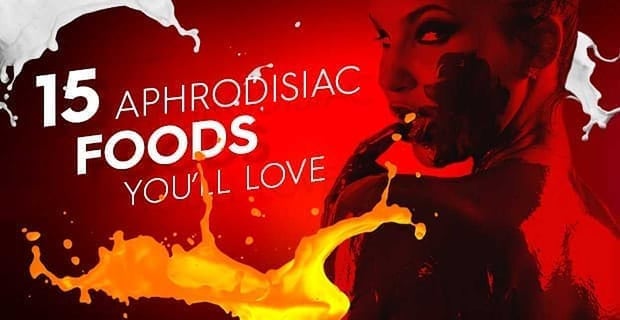 What do we all love more than food? Food that helps us make love.

These 15 aphrodisiacs will leave you satisfied in more ways than one – time to hit up the grocery store!

Your heart is racing, your palms are sweating and your blood is rushing through your body – did you eat a pepper, or are you ready to jump somebody’s bones?

You can really “spice things up” with some chilies as your body mimics its sexual response. Talk about hot!

D.H. Lawrence wrote a poem about their figgy wiles, and there is even speculation they were the true forbidden fruit.

If their womanly appearance isn’t enough of a turn-on, the iron and potassium it provides are sure to get your blood flowing to all the right places.

This veggie not only keeps you looking good, but it actually makes you more attractive. Celery contains androsterone, which is released by men’s sweat glands to attract women. So feel free to eat as much as you like – you’ll definitely thank yourself later.

Your favorite dessert is actually a sexual triple threat. With serotonin to make you happy, caffeine to keep you energized and phenylethylamine (your brain’s version of amphetamine) to make you feel high, there’s no reason not to indulge in some chocolate.

Women were once forbidden from eating artichokes because of their ability to inspire sexual desire, and a 17th century sexologist prescribed them to increase desire and stamina.

Legend has it Aphrodite (from whom we get the term aphrodisiac) sprang from an oyster shell. With a shell that resembles lady parts and enough zinc to up a man’s fertility and sperm count, it’s what’s inside and outside that counts with this sexual shellfish.

This is what they were talking about with those birds and bees! Honey not only resembles the consistency of some other bodily fluids, but it also is a great source of boron. This increases estrogen in women and testosterone in men, making sure everyone is happy.

In the 17th century, it was decided asparagus “stirs up lust in man and woman.” With potassium, thiamin, folic acid and tons of vitamins, it boosts histamine production. This helps both men and women reach orgasm, making for a happy dinner and happier dessert.

The oldest of fertility symbols, eggs also have vitamins to help balance out your hormone levels. It’s said eating raw eggs before sex will increase your libido.

If you’re not feeling uncooked chicken and salmonella, why not go for some caviar instead?

Their aroma is supposed to arouse women – well, it worked for Samson with Delilah! Almonds are a great source for the essential fatty acids you need for hormonal and reproductive health, including fertility and healthy libido.

We can’t blame you for going nuts over them!

The Aztecs referred to this fruit’s tree as a “testicle tree.” They may look like male genitals, but they also pack a punch with a bunch of vitamins and minerals to help with libido.

Not only that, but they’re also a traditional remedy for erectile dysfunction. Eat up!

Just make sure you both partake – otherwise, smelly breath will override these perks!

Thanksgiving may be your favorite holiday for more than one reason. The Smell and Taste Treatment and Research Foundation in Chicago found the scent of pumpkin pie increased blood flow to the penis by 40 percent and increased sexual desire in women. Mm mm good.

A phallic appearance is the least of its sexual tendencies. Vitamin B and potassium help out with hormone production, while the banana’s minerals aid in nutrient absorption. This combination boosts male libido, ensuring it’s not just a banana in his pocket.

We all knew it loosened you up, but alcohol also raises testosterone levels. This in turn increases desire and libido, particularly in women.

Red wine is the most famous type, though beer is also known for its effects. Make a fun time drinking lead to even more fun!