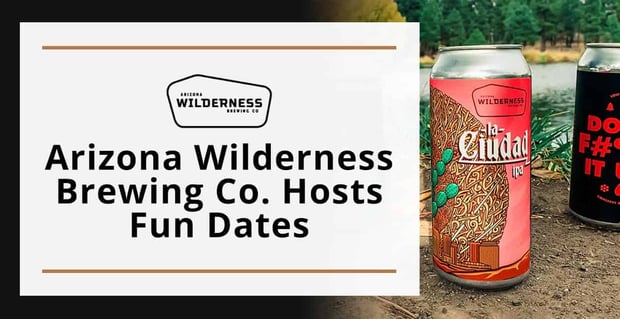 The Short Version: Arizona Wilderness Brewing Co. crafts tasty beers inspired by the state’s many wild spaces. The brewery sources local ingredients for both its beers and food menu. Daters can enjoy the brewery’s beer at its two Arizona locations — Gilbert Brewpub in Gilbert and DTPHX in Phoenix.

When couples decide to have a fun date night in Phoenix, they often visit Arizona Wilderness Brewing Co.’s downtown restaurant, DTPHX. It has a vibrant indoor-outdoor beer garden space with long picnic tables and wooden overhangs.

The brewery’s owners, Jonathan Buford and Patrick Ware, aim to reflect the beauty of Arizona in everything they make, including their beers, their food, and their restaurants. Their brews also support the state’s outdoor spaces and agricultural practices while highlighting products from the state.

“Every ingredient used has a conscious impact for our environment and/or local economy and communities,” said a spokesperson for Arizona Wilderness Brewing Co.

That mission is evident in the brewery’s beers, including its Blonde Ale called DON’T F#%K IT UP.

“With the spirit of not F#%king up AZ we formulated a conservation driven Blonde Ale brewed with 100% Arizona-grown and malted grains and local seasonal honey,” reads the beer’s description on the brewery’s website.

Many couples enjoy the company’s food as much as its beers on date night. Its DTPHX location and Gilbert Brewpub in Gilbert, Arizona, offer nature-inspired options — many of them vegan.

Because of this commitment to ethical practices and the wilderness, Arizona Wilderness Brewing Co. has found plenty of couples who want to make the beer garden or brewpub their go-to date spot. Its venues have hosted wedding rehearsals and baby reveals, and its team members have even witnessed engagements.

“It makes us proud to have a space to share for these types of exciting life events that we hope people will take with them no matter where they end up. We have multiple local couples inform us that AZ Wilderness will forever be their date spot, with the family or without,” the spokesperson told us.

Brewing a Variety of Flavorful Beers

Arizona Wilderness Brewing Co. brews a wide variety of beers and lagers. The company’s philosophy is perfect for conservation-minded couples looking to shake up their dating routines. The brewery works with local and sustainable ingredients, including Arizona-grown barley malted in Camp Verde, Arizona.

“This means, with every AZW beer you consume, you are helping save water in our precious Verde River,” the brewery’s spokesperson told us.
Some ingredients are even hand-foraged in the desert.

The company produces several lagers, pilsners, stouts, and ales, among other seasonal offerings. The brewers primarily get their inspiration from the state’s wilderness areas.

“Arizona Wilderness was built and thrives upon protecting Arizona’s precious resources while showcasing the flavors our state has to offer through our world-class craft beer,” said the spokesperson.

For instance, the brewers created a Koelschip, a type of brewing vessel, at Camp Coolship in Dugas, Arizona.

“Brewed in the winter of 2018 and allowed to cool and become inoculated with the wild microflora at this location. This beer was spontaneously fermented and laid to rest for two and a half years in French oak before being conditioned in bottles,” the brewery’s website explains.

Beer lovers can sample Arizona Wilderness Brewing Co.’s beers at one of the two restaurant locations or order through the company’s website.

Couples on dates enjoy celebrating occasions or hanging out with friends at the DTPHX beer garden.

One satisfied customer on Yelp wrote: “Love this spot! One of our go-to places for a casual drink or an outing with friends. The beer garden is great — spacious and lively with water misters all around. Highly recommend it! Dogs are welcome and they often have live music. … Also love their focus on sustainable practices.”

Another patron agreed, noting, “On top of that, everything I’ve eaten here is so amazing. Fries are always fresh and crispy. PB burger was definitely interesting!! Pretzel is also very yummy and don’t even get me started on the churros with the caramel dip! … They’ve got an indoor and outdoor bar as well which is very convenient.”

Couples also visit the Gilbert Brewpub for dates, and the food is similar to that offered at the beer garden. The menu focuses on shareable plates, including Mexican dishes, sandwiches, salads, hamburgers, and desserts.

At the DTPHX location, couples can select from popular appetizers, including the Wilderness Duck Fat Fries with two dipping sauces, or the Buffalo Cauliflower, a crispy cauliflower topped with barbecue sauce.

Celebrating the Beauty of “The Grand Canyon State”

Arizona Wilderness Brewing Co. caters to people who enjoy tasty beer, fresh food, and the state’s natural wonders. Its team members are also enthusiastic about the beers they make, their menus, and the brewery’s commitment to locally sourced ingredients.

“We like to consider our entire working team ‘Wilderness Humans.’ They are true warriors at what they do and continue to amaze us of their talent inside and outside of our brewery and restaurants; including a shared passion for the outdoors,” said the Arizona Wilderness Brewing Co. spokesperson.

The company’s ultimate goal is to help break down more barriers between the indoors and outdoors. That starts with the designs of its locations.

“When visiting either AZ Wilderness location, you immediately feel a sense of exploring the AZ Wilderness without actually being outside,” said the brewery’s spokesperson.

Beer and food lovers of all types appreciate that ethos when planning their dates at one of the brewery’s two restaurants. Typical diners include families, young entrepreneurs, beer nerds, and many 21-year-olds excited to try their first craft beers.

In the future, the company plans to expand its commitment to the environment and sustainability by becoming a Certified B Corp. That includes doubling down on sustainable practices. And it’s starting that journey by making all of its merchandise with recycled materials.