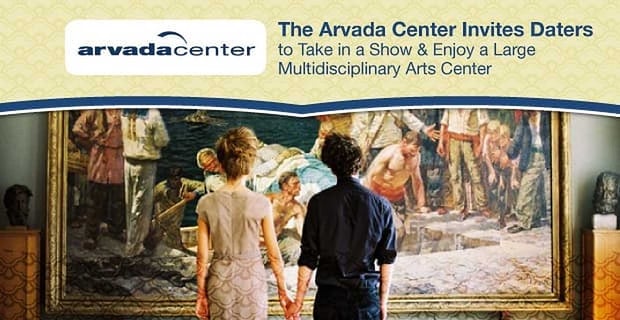 The Short Version: It’s easy to slip into a dating routine that takes you from restaurant to home without a single memorable moment taking place. When you’re so busy going through the motions, you can forget to appreciate the beauty and wonder of the world around you. That’s why museums and art centers make such dynamic date spots. In Arvada, Colorado, couples can enjoy an out-of-the-box date at the Arvada Center for the Arts and Humanities. This nonprofit organization has three art galleries as well as a theater company that puts on family-friendly shows throughout the year. In the summer, you can go to the Arvada Center to enjoy an outdoor concert with that someone special. Whether you want to take a dance class or spend the day at an arts festival, the Arvada Center gives you and your partner the chance to awaken your senses and rediscover the romance in your lives.

Located in the metro area of Denver, the Arvada Center for the Arts and Humanities opened its doors in 1976. At the time, Arvada was a quiet Rocky Mountain town where nearly 50,000 people lived. The city’s population has more than doubled since then, and the Arvada Center has grown along with it.

Today, the award-winning Arvada Center for the Arts and Humanities is recognized as one of the largest multidisciplinary arts centers in the nation. The center’s highly trained team is devoted to promoting the arts. Throughout the year, the nonprofit runs engaging programs to raise cultural awareness and cultivate an appreciation for theater, music, and artistry among visitors young and old.

The award-winning Arvada Center is a cultural hub in North Central Colorado.

According to an Arvada Center spokesperson, “The mission of the Arvada Center for the Arts and Humanities is to inspire the residents of our region to live and learn creatively by experiencing the performing arts, visual arts, educational programs, and historical exhibits.”

The Arvada Center gives its patrons the opportunity to expand their horizons by experiencing different forms of art. You can entertain and impress a date by taking a trip to the center’s art galleries or getting tickets for a theatrical performance. These date venues provide many thought-provoking conversation topics, which makes it easier to get to know someone on a deeper level.

The art organization’s focus on multidisciplinary art makes it stand out in the community. Whether you love live music or dance classes, you’ll find something to capture your interest here.

“There is something for every art lover happening here,” the spokesperson said. “And, yes, we celebrated our 40th anniversary in 2016 — a huge milestone.”

In July 2017, the Arvada Center completed its first year as an independently run nonprofit. That means the arts organization is no longer a department of the City of Arvada. This is a new era for the team, and they’re excited to grow and offer exciting cultural events and social opportunities for a diverse crowd of art lovers.

Every year, the Arvada Center sees nearly 300,000 visitors a year, including over 53,000 children attending children’s theater productions. The center offers around 750 theater classes a year, and nearly 7,000 students take part in that. In this way, the organization cultivates an appreciation of the theater and the arts in the next generation of Coloradans.

Of course, the Arvada Center also has plenty of engaging and educational activities for adults as well. Its Summer Stage Concert Series entertains almost 14,000 concertgoers every year. The summer concert series takes place in the outdoor amphitheater. Attendees sit outside in the cool summer evenings and enjoy the fresh air while bands play live music until the sun sets.

Each year, the Arvada Center hosts three musicals and four plays. The 2017 to 2018 theater season showcased Broadway favorites, including “A Chorus Line,” and literary adaptations, including “Sense and Sensibility” by Jane Austen and “Sunday in the Park with George” by Stephen Sondheim. The Arvada Center recently announced its 2018-2019 season, which will feature two regional premieres and a world premiere play. Ticket packages range in price from $120 to $318. Single tickets will go on sale in August.

The Broadway smash-hit “Mamma Mia!” will take the stage first, running from September 7th until September, 30, 2018. During the winter season, couples can give themselves a laugh by attending a performance “ELF: The Musical,” a show based on the classic 2003 movie. In the spring, theater lovers can see the regional premier of “The Moors” or a black-box performance of “The Diary of Anne Frank.”

“Theater at the Arvada Center is extra special because it’s all developed, designed, and created right here in the building,” the spokesperson said. “Our costumes and sets are created in-house by a talented team of designers — it truly showcases the talent of Colorado’s theater community in every aspect of the production.”

The Arvada Center Black Box Repertory Company has performed all the plays at the center since 2016. This company of talented actors, designers, and directors perform three plays in a repertory rotation. Regulars to the theater often see the same faces over and over again, which allows them to have a unique relationship with local talent. The world-premiere performance of “Sin Street Social Club,” a fun and flirty comedy adapted from “The Rover” by Aphra Behn, will take place in the Black Box Theatre from March 15th to May 19th, 2019.

The galleries at the Arvada Center host dozens of fine art exhibitions throughout the year. The center has three distinct galleries, which total 10,000 square feet of space. Couples can come here any day of the week to view remarkable works of art. The galleries open at 9 a.m. on the weekdays, 10 a.m. on Saturdays, and 1 p.m. on Sundays. They typically close around 6 p.m. but will stay open late on the evenings of the center’s theatrical performances.

“The Arvada Center prides itself on keeping its gallery and exhibitions free and open to the public seven days a week,” the spokesperson said. “That is something it has done since inception in 1976.”

The Arvada Center’s galleries offer a place of quiet repose for thoughtful daters.

In the summer of 2017, the Arvada Center held its first annual Arts and Ales Festival, and it was a rousing success. The two-day event saw individuals, couples, and families filling up their plates with local foods and filling their arms with artistic souvenirs. You and your date can spend the day appreciating handmade art as well as handcrafted beers.

Local bookworms are in for a treat this year because the Arvada Center plans to host its first-ever Arvada Center Book Fest, a one-day literary arts festival designed to celebrate the written word. If you and your significant other love reading, you can head to this event to mingle with notable authors, publishers, artists, and food vendors. Best-selling author Laura Moriarty will be the keynote speaker.

Since 1976, the Arvada has been surprising, delighting, and inspiring visitors who come from all walks of life. Thanks to this dedicated art organization, couples can escape their everyday stresses by attending a theatrical performance, admiring works of art, or listening to live music.

As you can see, there is something for any kind of art lover happening at the Arvada Center. You can come here to share your favorite musical or to experience your new favorite band with someone special.

Whether you’re laughing together at a comedy show or humming along at an outdoor concert, you’ll make wonderful memories at the Arvada Center.

“We’re also located close to vibrant Old Towne Arvada, which has a wonderful collection of bars, restaurants, and breweries,” the spokesperson said. “Dinner and a show or a visit to the galleries could make for a perfect night out.”