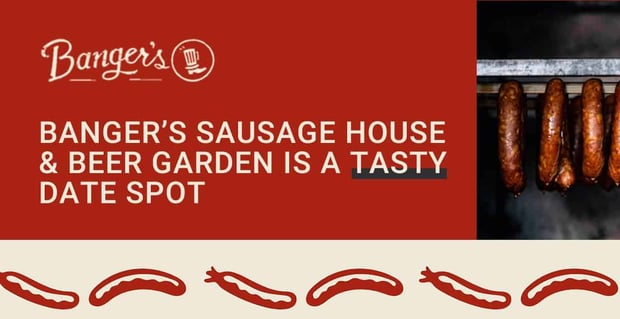 The Short Version: Many couples looking to spice up their socially distanced date nights head to Banger’s Sausage House & Beer Garden in Austin, Texas. The restaurant offers an inviting experience with its outdoor dining and thoughtful safety procedures. Couples can enjoy house-made sausages and more than 200 beers on tap — the largest selection in Texas. Couples are sure to have a lively date with the eatery’s communal tables and windows to watch food being prepared.

After nearly a year of social distancing, Austin couples often crave a little bit of normalcy. That’s why many head over to Banger’s Sausage House & Beer Garden for an outdoor experience that reminds them of how dates used to be.

Unlike many restaurants, a visit to Banger’s Sausage House & Beer Garden has always included the chance to get outside. The restaurant is modeled after famous German biergartens with its outdoor patio and communal picnic tables. Its menu, including house-made sausage and beer, is also German-inspired, but the name Banger’s actually comes from the British term for sausage.

Before guests enter, they go through COVID-19 safety checks to make them feel more comfortable. The restaurant also limits groups to 10 or fewer and sanitizes high-touch surfaces every 30 minutes.

Diners can start with some of Banger’s Sausage House & Beer Garden’s most popular appetizers, including fried pickle spears and a giant soft pretzel served with cheese sauce and beer mustard. The establishment also serves up tasty beers that come from as nearby as Austin and as far away as Cologne, Germany.

The restaurant’s Currywurst, a spiced Berlin bratwurst served over fries with a side of spiced ketchup and aioli, is one of its main dish specialties.

Many diners enjoy the experience so much that they decide to return for a different type of fare: Sunday brunch. That’s when the restaurant shifts its offerings to pancakes, avocado toast, bagels, and other delicious breakfast items.

The food is tasty, and the environment is lively, and what makes it a great date destination is that the restaurant feels like it did in pre-COVID-19 times.

A Sausage and Beer Place for Everyone

Before Banger’s Sausage House & Beer Garden, Austin had no eateries that focused on well-made sausage. Ben said he was surprised because he was such a fan.

“When I was in college, there was a sausage cart near campus, and I often found myself in line for it at 2 a.m. The lines there were longer than anywhere else,” Ben told us.

He suspected that a city of food-lovers like Austin would appreciate a similar experience, though the restaurant he planned would offer sit-down tables and beer, as well. Ben said he decided to replicate the sausage cart experience with homemade food and added a patio with twinkle lights, picnic tables, and trees.

It turned out he was right. After Banger’s Sausage House & Beer Garden opened, it quickly found a following.

The restaurant has a diverse clientele, and it hosts many bachelor and bachelorette parties, dates, and family outings.

“An amazing thing happens because we don’t serve hard alcohol, only beer. The parties can’t get as rowdy as they otherwise would. Mom and Dad can have a drink. Everyone meets in this good spot and coexists nicely,” Ben said.

The restaurant also bridges daytime and night out experiences. Couples on dates have plenty to watch and discuss as they’re eating. If they sit in the beer garden, they can watch through two picture windows as their sausages are prepared and smoked.

The long, communal picnic tables can also cut the awkwardness of first dates.

“Long tables with people doing the same thing creates an energy of its own. If you’re on a date, you can have natural conversations because there’s so much happening. It gives you more to talk about than a quiet restaurant where you only focus on each other,” said Ben.

Taking Pride In Food Made From Scratch

Diners appreciate watching their food being made at Banger’s Sausage House & Beer Garden, and the meal itself tastes better because of the care in preparation, Ben said. The team takes pride in creating sausages the old-fashioned way: by hand and in small batches.

“It’s been a journey for me to seek out things I like and add them to the mix we have here. That has resonated with our customers,” Ben said.

Ben is intentional about the preparation process, and he ensures that his cooks have the right tools and facilities for sausage-making. For instance, sausages should be assembled at a specific temperature. If a space is too cold or too warm, the protein molecules won’t bond, resulting in a poorly made sausage.

Guests can safely enjoy their food and drinks outside at Banger’s Sausage House & Beer Garden.

“We have a passion for doing an excellent job. We do so many things in-house, including processing, curing, and pickling,” Ben said. “We’ve given our people the right tools so they can channel their determination into producing something great,” Ben said.

Ben also wanted to offer a stand-out beer selection. So he started choosing local, national, and international brews to create the most extensive draft lineup in Texas, with more than 200 options. The restaurant also carries dozens of canned and bottled beers.

Banger’s Sausage House & Beer Garden was closed longer than other restaurants in Austin after COVID-19 pandemic restrictions were lifted. That was because Ben didn’t want guests to feel that eating there was a chore.

“I went to other restaurants so I could formulate a plan to reopen. Places were trying to do the right thing, but at the same time, they sacrificed the experience,” Ben said.

Instead, the Banger’s Sausage House & Beer Garden developed practices that allowed it to follow CDC and city guidelines without sacrificing what made Banger’s unique.

“It may not be the same experience you had in February 2020 but what we’ve created is awesome and similar,” Ben told us.

If couples aren’t comfortable dining at the beer garden, they can still experience the food. The restaurant offers all of its sausages on its take-out menu, along with what it calls its secret sub sandwiches menu. A meatloaf sub, roast beef sub, and sausage and peppers sub round out the menu.

“They’re designed to be to-go food, but if you ask your server, you can get subs in the restaurant, too. It’s a special, fun thing,” Ben said.

Sausage-lovers who don’t live in Austin can have their sausages shipped to their homes. Diners can choose from eight, 12, and 16 packs of a variety of sausages to cook at home.

“In a lot of ways, the most powerful thing we’ve done is give people a sense of normalcy in an abnormal time. That’s our best innovation,” Ben said.