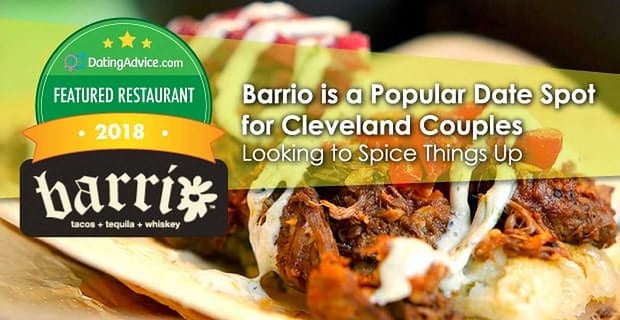 2018 Featured Restaurant: Barrio is a Popular Date Spot for Cleveland Couples Looking to Spice Things Up

The Short Version: Diners are willing to wait for over an hour to get a table at the hot Cleveland eatery Barrio, and that’s not just on the weekend — that’s every night of the week at all five locations. There’s no doubt that Barrio has struck a serious chord with Clevelanders, but what makes it so desirable? The right combination of a vibrant decor, friendly servers, and Mexican food that’s a little out of the ordinary — think Thai chili tofu and pineapple salsa. Barrio is one of our featured restaurants because it makes such a great date spot, especially for first dates. Online reviewers agree with some even calling Barrio one of the best spots in Cleveland.

Cinco de Mayo commemorates a Mexican war victory over France at the Battle of Puebla in 1862, but on May 5, 2012, Clevelanders had something new to celebrate: the opening of Barrio.

Barrio’s first location was in Cleveland’s trendy Tremont neighborhood. Jake describes the choice of area, noting, “Tremont’s a cool little neighborhood with a lot of culture on the west side of Cleveland, minutes from downtown. It was rising in popularity. It’s not commercial; it just has a lot of character.”

Ultimately, Barrio aimed to create something that the Cleveland scene was lacking. “Our mission has always been to create a fresh, local spin on a taco joint,” Jake said. “But make sure we emphasize local, fresh products and great food quality.”

Barrio is popular with people who live in and around Cleveland for its food and atmosphere.

This strategy worked, and Barrio has expanded from an individual location to five throughout the area over the last six years. What’s the recipe for Barrio’s success? The restaurant has never lost its focus on creating one-of-kind taco joints in hip, up-and-coming neighborhoods.

Despite the added locations, Barrio hasn’t lost its popularity. Waits at the restaurant begin around 20 minutes after it opens and can last up to an hour each night.

Expansion is on the horizon as Barrio will bring its blend of high-energy atmospheres, hand-painted murals, and tasty food to its first location outside of Cleveland.

“We are testing the market in Portsmouth, New Hampshire,” Jake said. “We’re opening our first location out there, and it’s a seaside town with a lot of culture, awesome neighborhoods, and it’s right by the ocean. I think it’ll be a perfect fit.”

With its memorable atmosphere and outside-the-box food, Barrio is the kind of place you and your date are going to enjoy. Diners love the combination of a laid-back, affordable meal and a high-energy environment.

“It’s a great restaurant to go on for a first date or a hundredth date,” Jake said. “We get high school and college couples to people in their 70s for date nights.”

While ages and tastes may vary, when it comes to shareable appetizers diners agree: Barrio’s queso and guacamole are can’t-miss starters.

“Our most popular appetizer is our queso blanco cheese dip. It’s mind-blowing,” Jake said. “It’s one of the must-do things if you’re in Cleveland, says Cleveland.com. It’s got a cult following, and it’s a great thing to share for a date.”

Barrio’s menu is one of the reasons diners will wait an hour for a table on a weeknight.

Aside from queso, Jake lists the restaurant’s unique guacamole as another must-eat offering. “Our guacamole is made fresh. And we always do some cool specials for our queso and guac — this month our guacamole is made with caramelized pineapple, goat cheese, and crispy bacon,” he said.

“We take beverages seriously,” Jake said. “We wanted to have one of the best craft beer lists in the city and focus on craft cocktails and margaritas.”

Barrio strives to provide an interesting atmosphere in which to enjoy your meal.

“Our walls are hand-painted by a local artist out of Tremont. Every inch is painted in a ‘Day of the Dead’ theme,” Jake said. “It adds more of a unique dining experience. You’ve got this cool artwork to check out. It creates a feel and vibe in the restaurant.”

Barrio Catering: Because Every Wedding Should Have a Taco Station

Barrio may be the ultimate date spot because couples can bond there. Want proof? Take the couple who bought the table where they had their first date — so they could use it at their wedding.

But even if you don’t commemorate your first — or favorite — date with Barrio memorabilia, you can do something that may be even better: Bring Barrio to your wedding.

As couples move away from making guests check boxes for fish or chicken, Barrio gives guests the opportunity to customize their dinner at the reception. And isn’t the goal to make a wedding fun? You can have a Barrio taco bar at your wedding, or go all out and have Barrio bring its food truck to your reception.

“We have tacos that are pre-constructed, but most people build their own,” Jake said.

Having Barrio cater your wedding is an easy way to ensure everyone has a good time.

Barrio’s catering menu lets hosts choose from two, three, or four meat packages that serve 15 to 100 guests. Meats include standards, like chicken and pork, as well as popular favorites like chorizo and jalapeno lime shrimp. Toppings, like cheese and corn salsa, are provided, and the couple-to-be can choose three of Barrio’s sauces, including Crack Sauce, which is a spicy house ranch.

Perhaps what makes Barrio catering the most unique is the catering staff’s enthusiasm, and that love of Barrio is shared by its entire team — from barbacks to servers to managers.

“The people who are working for us are crazy about what we’re doing,” Jake said. “They like working for our corporate group because they eat, sleep, breathe Barrio — it creates an electric culture.”

Rave Reviews From People in the Neighborhood

Hungry diners wait for Barrio because it’s well worth waiting for.

Yelpers love the restaurant. Zachary P. notes, “This is one of my favorite bars/restaurants to visit, it also helps that my fiancé is borderline obsessed with Mexican food. Have been here for both brunch and dinner and have always been pleased.”

Carter D. also raves about the restaurant, “We love, love, love the decor here… I mean how cool is it to have a skeleton wearing a sombrero riding a bike above your head while you eat tacos?”

Patrons sing Barrio’s praises in online reviews for its menu and its ambiance.

Sage W. agrees, saying, “What keeps me coming back is the atmosphere, friendly staff, and that I’ve truly never had a bad experience. Plus, it’s a very affordable meal for the level of quality — they also offer a happy hour on weeknights making it an even better deal.”

Jake isn’t surprised by how much love the restaurant gets from its diners. Barrio offers a combination of everything people want out of a dining experience — tasty food, nice people, and a lively environment.

“We’ve been voted best tacos in Cleveland pretty much every year since we opened,” he said. “The food is good. You can get a good drink. And our staff is friendly and laid-back. You’re not going to get a server who’s reading a script or one that’s going to talk your ear off.”

Barrio has taken the Cleveland market by storm in the last six years, but it’s not done yet. In addition to branching out into the New Hampshire market, Barrio still has plans to expand in Cleveland and beyond.

“We’re still doing just about one location every year. Plenty of neighborhoods in the Cleveland area, but also Akron and Kent. College towns would be great because we have that young demographic,” Jake said.

Wondering if you’ll soon have a Barrio near you? Jake describes how the restaurant decides where they’ll open next: First, it scopes out the neighborhoods. “We look for authentic neighborhoods where there’s a lot of foot traffic, and for neighborhoods that have a little more character than your average strip mall,” he said. “After all, ‘Barrio’ means neighborhood.”

Certainly, that’s what Barrio has become to many Clevelanders: A favorite neighborhood taco joint.