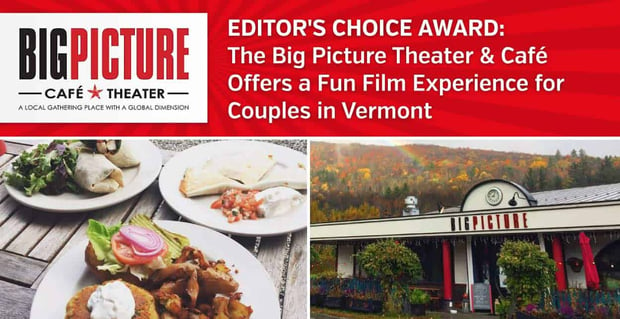 The Short Version: The Big Picture Theater & Café offers an engaging date experience for both locals and visitors in the Mad River Valley area of Vermont. The unique community gathering center is much more than a movie house, although it still screens some of the most acclaimed first-run, second-run, and independent films. Its café serves breakfast, lunch, and dinner, and couples can even enjoy their meals while watching a movie. For creating a space with a deep sense of community, Big Picture Theater & Café has earned our Editor’s Choice Award.

When Claudia Becker was a teacher, she recognized the importance of film as an effective educational tool. She even ran a successful film festival at the Big Picture Theater in Waitsfield, Vermont, to provide others with access to the medium’s lessons in art and culture.

When the theater’s owners unsuccessfully tried to turn the movie house into a live music venue, she became interested in purchasing it. Claudia, who grew up watching classic European films, had just had her first child at the time. But it seemed like an exciting opportunity and a worthy challenge, so she took the leap. She introduced the updated Big Picture Theater & Café in 2006 with a new mission.

“We wanted to make it much more than a movie theater. We wanted to make it into that third place that isn’t work or home, but somewhere people could come together as a community,” Claudia said. “The idea was to create a gathering place with a global dimension. About 15 years later, I feel like we’ve achieved that.”

Located in the Mad River Valley of Vermont, Big Picture Theater has grown into a popular spot to see popular first-run, second-run, and independent films, and its café serves breakfast, lunch, and dinner.

The theater also offers live music, educational programming, and special events that bring locals of all ages and backgrounds together under one roof.

Enjoy Breakfast, Lunch, or Dinner at the Theater

As soon as visitors walk into Big Picture Theater & Café, they know they’re not in a typical corporate movie theater. Some people are relaxing or working on laptops in the coffee house while others are dining on locally sourced meals in the café — for breakfast, brunch, lunch, or dinner.

The café is popular for its Sunday brunch, which it serves until 2 p.m.

The establishment also has a full bar featuring local brews and sodas poured straight from an old-fashioned fountain.

“Everything we do is authentic. The food is cooked from scratch with local ingredients to order, but we don’t make a big deal about it,” Claudia said. “We’re committed to quality and love.”

You can eat your meal in the café or at one of the loveseats or tables set up in the theaters themselves. Unlike most theaters, it’s no problem if you want to eat an entire meal while watching a movie. Each theater also has plenty of tables and sofas so visitors can get comfortable with their special someone.

“But it’s also a place you can go just to get a coffee,” Claudia said. “And we’re famous for maple-glazed donuts.”

Those local, organic donuts, made by Very Small Donuts, were even featured in Zagat’s 50 States, 50 Donuts guide. And one of the donut’s main ingredients — maple syrup — is locally sourced. In fact, Vermont was the top producer of maple syrup in the U.S. in 2019, producing more than twice as much maple syrup than the state with the second highest production, New York.

A Close-Knit Team That Works Together like a Family

According to Claudia, it’s not easy running a business in a small Vermont town, but she said it helps that she’s got a team of experienced employees who have been with her for years.

The co-workers also happen to be good friends, and that closeness spills over into customer experience. It’s normal for customers to get a smile or even a joke along with their excellent service, Claudia said.

“It’s everybody’s other home and place where they love to go,” she told us. “We’ve had weddings and funerals. We haven’t had a birth yet, but we’ve had practically everything in between.”

It’s not out of the ordinary for Claudia and the staff to see first dates and engagements take place at the theater, and community members often come here to celebrate birthdays as well as other meaningful events in their lives.

When Barack Obama was elected president, for example, the theater was filled with 500 people who watched the inauguration of the first black president on the big screen. The theater has also shown World Cup games and plenty of live music events.

When one regular who frequented the theater for lunch recently passed away, Claudia said it was “like losing a family member.” It wasn’t surprising, then, that the woman’s family decided to have the memorial services at Big Picture Theater. That’s what the theater and cafe set out to be: a gathering spot that becomes important in people’s lives.

In 2020, Big Picture Theater & Café Will Celebrate 17 Years of Its Mountaintop Film Festival

As a former teacher, Claudia always considered the film festival she put on at the original Big Picture Theater to be an important educational opportunity. Known as the Mountaintop Film Festival, that tradition is now in its 17th year — and continuing to expand.

Claudia decided to focus more on community outreach by turning the festival into a regular series. Those interested can visit its website to check out what’s playing.

Bringing the community together has always been more important than making a profit. That’s why Big Picture Theater & Café remains one of the rare independent theaters in the nation.

“I never cared about money or profit. I care about creating something meaningful and soulful, and outreach through film is a big part of that,” Claudia said. “It’s an important place to us and the community, and it’s hard to imagine not doing it.”

Astop at Big Picture Theater & Café can add to any trip. Its warm lighting and retro-style makes visitors feel like they’ve discovered a gem. That’s exactly what people want when they bring a date.

“On a date, you’re always trying to impress,” she said. “And here you can find that gem in the sea of corporate realities.”