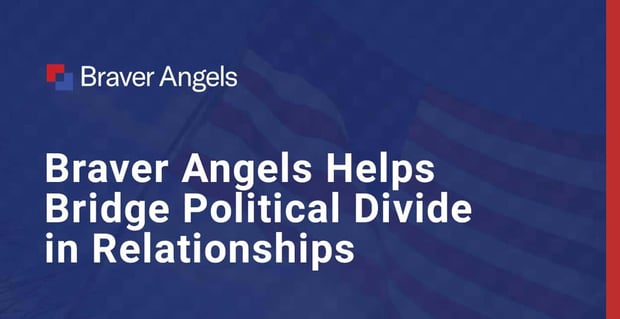 The Short Version: Braver Angels is a bipartisan organization that strives to bring Americans together regardless of their political affiliation. Couples and singles can attend workshops to learn strategies on how to engage in civil political debates while maintaining harmonious relationships. Braver Angels is on a mission to help people better understand and tolerate differing political opinions. Its efforts are part of a growing movement to depolarize American politics.

Political disagreements can cause damaging rifts in relationships. Before you know it, the divergence in your opinions can spread to other areas of your relationship and cause it to fall apart. According to The Washington Post, 22% of Americans said they have ended friendships over political differences during the 2020 presidential election.

People say that opposites attract, but when it comes to politics, being at odds can dampen enthusiasm. It can be challenging to deal with such glaring differences in opinions with someone you love. Negative emotions can surface and have detrimental effects on a relationship.

Fortunately, all hope is not lost. Couples can find solutions to their political woes and leave the petty squabbles to the politicians.

Braver Angels helps Americans manage polarization within their relationships through workshops that have been influenced by family therapy techniques. The organization seeks to lessen the impact politics have on relationships by equipping its audience with strategies on how to disagree on a political level and still maintain healthy relationships.

Luke Nathan Phillips, Publius Fellow for Public Discourse at Braver Angels, said the organization’s mission is to help people engage in conversations on a relational level and look for common ground with those we disagree with. Braver Angels advises its viewers to listen to each other’s opinions and not focus so much on changing the other person’s opinion.

By employing Braver Angels’ tactics and outlooks, couples can avoid heated discourse and prioritize their relationship over political disagreements.

“The best way to look at the value of civil discourse and depolarization in a dating context is to understand that politics is not at the core of our relationships. The relationship is at the core,” said Luke.

Listen to the Other Side & Keep an Open Mind

Braver Angels works hard to help people find common ground and rediscover the actual value of their relationships. Luke said politics shouldn’t have to get in between relationships and destroy them.

Although someone’s politics do hold weight, Luke said they don’t merit more attention or significance than other factors, such as trust and connection, that make relationships succeed. In his view, personal relationships should have a separate sphere that politics doesn’t infiltrate. That hasn’t been the reality in the U.S. over the last couple of years, though.

In 2020 and 2021, political polarization skyrocketed. Media and social platforms overflowed with news from both ends of the spectrum. Responses to topics such as COVID-19 and social justice protests amplified the growing rift between the two parties. And as opinions grew more disparate, the number of people listening to each other decreased.

“When polarization comes, you can’t ignore it. My advice is to listen more than you talk and try to see things from another point of view,” said Luke. “We can’t let it define us or destroy us.”

With its engaging content and workshops, Braver Angels helps people see the importance of listening rather than just trying to get one’s point across. Partners should seek to understand each other’s opinions and keep an open mind when it comes to politics.

Red-blue married couple Rick and Barbara have shared a lot of pragmatic advice on navigating a romantic relationship across the political spectrum on the Braver Angels podcast.

Luke said people should come to the realization that not everyone will agree on the news of the day or the public policies in place. Changing someone’s opinion is difficult — sometimes next to impossible — and couples have to determine how to live with some disagreements.

“The acknowledgment that they’re not going to change can set the stage for figuring out what you do like and how you can still be in a relationship with this person,” said Luke.

Find Common Ground That Goes Deeper Than an Opinion

Braver Angels workshops encourage people to look past the surface of political opinion and try to understand the individual’s fundamental values. Luke highlights that America is a country of diverse people and cultures. He said many people develop their opinions through a mix of cultural experience and sensibility.

“Your political opinions themselves do not fully express the core values you have beneath your politics,” said Luke.

Having a relationship with someone who has a different outlook doesn’t always lead to adverse ramifications. Luke said people shouldn’t limit opportunities for valuable relationships based on political disagreements. In fact, couples and singles could learn a lot about themselves and their community through discussions with people who come from contrasting backgrounds.

“The whole story of marriage across human history and relationships is the uniting of different worlds and creating new worlds through those unions of people,” Luke said.

Of course, relationships will always have their fair share of differences. Throughout history, partners have worked together to blend their backgrounds and unite over shared interests and experiences. Luke explained that couples should go into relationships with the knowledge that it will be imperfect, and that’s reasonable.

Luke added that cultural and political factors aren’t the main drivers of relational success. Couples shouldn’t fixate on political matters because those questions do not define intimacy or attraction.

“I’ve seen couples make an effort to see the other as an individual, who also happens to be of the rival sect of politics. It takes a human person to say they’re not the sum of their opinions. They are infinitely valuable beyond opinions, and that’s a step toward seeing others beyond politics,” said Luke.

All relationships have their ups and downs. Braver Angels has sought to demonstrate that politics may sometimes be a point of conflict, but it doesn’t mean the relationship can’t overcome it. Luke said people can still find value in their connections if they share higher principles that go beyond politics. This process makes relationships work.

“If you look at conflict as something that can be destructive or productive, that opens up a different kind of mindset, and maybe that can take the form of people trying to learn things from each other,” said Luke.

A relationship consists of two people from different origins converging to create a union. There are bound to be conflicts. But the outcome of this friction depends on a person’s mindset. Couples can use disagreements to learn more about each other and find something of value from their discussions. As Luke pointed out, people’s flaws can come from the same source as their greatest virtues.

If they want their relationships to survive political divides, singles and couples can practice civil discourse on polarizing subjects with people who have different points of view. After all, people are not the same and without diversity, the world would be a boring place.

“The process of being a member of society is seeing how you and your life works with other people,” Luke advised. “During the holiday season, you may have found yourself under the mistletoe with wonderful people who are different from you. Don’t let politics define you and your relationships with them.”

Lynn Cadet is a dedicated feature writer for DatingAdvice.com, and her articles have been shared and posted across the web. She has work experience in online content and media relations. Her passion for creative writing has led her to work collaboratively with professionals in the tech and lifestyle sectors. Lynn aims to create inspiring, relatable, and informational pieces on all things dating.