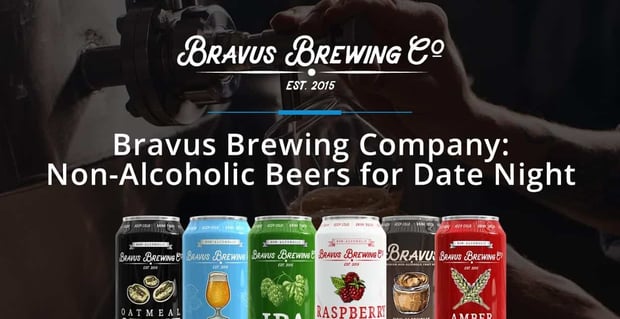 The Short Version: People may feel pressure to drink on dates, but many couples want to enjoy an alcohol-free evening. When people decide to cut down on alcohol, they still may find themselves missing the taste and texture of small-brew beers. Bravus Brewing Company — the first non-alcoholic craft brewery in the United States — set out to solve that dilemma. The brewery creates non-alcoholic beverages that look, taste, and feel like a real beer — without the buzz that could impede judgment and perception. Bravus Brewing Company has found a devoted following of folks who don’t drink or simply want to cut down on their alcohol consumption.

Philip Brandes had a friend who brewed craft beer and developed a high-proof version with nearly the same alcohol content as a cocktail. However, Philip’s friend enjoyed the beer so much that he began to drink too heavily.

“Eventually, his wife said, ‘It’s me or the beer,’” Philip told us.

The friend chose his wife and switched to alcohol-free beers, but mass-produced, non-alcoholic versions weren’t very satisfying. The watery lagers were nothing like the thoughtfully developed IPAs he appreciated and brewed himself.

Bravus Brewing Company was the first non-alcoholic brewery in the United States.

Philip, a software programmer at the time, made him a deal: If his friend taught him how to brew beer, Philip would figure out how to make a great-tasting, non-alcoholic IPA.

That’s how Bravus Brewing Company, the first non-alcoholic craft brewery in the U.S., was born. And it took a while to get the recipes right.

Philip started brewing the IPA in a distillery in his garage. After much time and effort, he eventually created a non-alcoholic beer that tastes almost identical to the alcoholic version.

The beer passed muster with Philip’s friend — and with other folks who prefer non-alcoholic beer. Low-alcohol beers appeal to those who struggle with alcohol addiction, want to cut down on their consumption for health reasons, or just desire a clear-headed date night with a potential partner.

“We can’t make enough of the stuff,” Philip said with a laugh.

Products That are Just as Tasty as the Alcoholic Versions

Bravus Brewing Company specializes in strong, assertive flavors, which means drinkers don’t notice the low-alcohol content. Non-alcoholic beer varieties include the IPA, an oatmeal stout, an amber ale, and a blonde ale. The company’s latest products include a raspberry gose, a sour beer, and a peanut butter stout.

“I’m proudest of our stout. It’s dead on to Guinness or a traditional stout. We also make a peanut butter stout that people can’t get enough of,” Philip said. “We only make a little bit, and it’s all they ask about now. We focus on approachable, great-tasting NA beer.”

Bravus Brewing Company can make such delicious beer because it uses a particular yeast strain that doesn’t produce much alcohol. The team partnered with a molecular biologist who showed it how to keep fermentation low by brewing the beer for long periods over low heat.

Philip told The Orange County Register that the beer-creation process used the sous vide method and that the brewery doesn’t filter its beer, which creates the tasty, non-alcoholic flavor.

Bravus Brewing Company offers a wide variety of beverages that taste like their alcoholic counterparts.

Bravus Brewing Company has found two large demographics of fans over the years — the can’t-havers and the don’t-wanters.

The first group includes those who can’t drink at all, often because their doctors have told them that alcohol isn’t good for them. These can’t-havers still enjoy the taste of beer but would feel unwell if they drank even a single alcoholic brew.

Younger demographics are more likely to be involved in the health movement and opt to drink less alcohol.

“They’re weaving in better-for-you products. Vegan and gluten-reduced or free, and we fall into that category, as well. Our beer has half the calories of other beers, and there are vitamins in there, too,” Philip said.

Diminishing Stigma Around Alcohol-Free Nights Out

Date nights often revolve around alcohol. Many first dates occur at a bar or brewery, and one or both singles may feel that they have to drink.

In a survey, nearly 70% of American adults responded that they drank alcohol in 2019. For some of those drinkers, alcohol can become a problem. More than 25% of respondents said they binged alcohol in the last month, and 6% said they drank heavily in the past month.

Philip suggests there can be a stigma around not drinking — especially on dates.

“I would imagine a lot of first or second dates are wrapped around alcohol. Part of the stigma about people who don’t drink is that it can be awkward ordering an iced tea or a soda at a restaurant or bar,” Philip told us.

That doesn’t mean that alcohol-free dates are less fun. In fact, without the pressure to drink, couples can get a clearer picture of how the date is going — and how much they have in common with a potential partner.

New and long-term couples can enjoy Bravus Brewing Company beers no matter how many dates they’ve been on. If couples live in Southern California, they can also find its beers stocked in many local liquor, wine, and specialty foods stores.

Outside of Southern California, couples can have beers delivered to their door.

Singles and couples have many reasons to choose non-alcoholic beer. They can still feel like part of the beer-drinking crowd without overconsuming and losing control. If alcohol makes someone feel unwell and they want to cut back, Bravus Brewing Company can help them get their habits under control.

Even pregnant women who have to cut out alcohol for nine months have turned to Bravus Brewing Company to quench those beer cravings.

“A lot of people tell us that they’re overjoyed. It can be alienating if you’re left out in a group of friends, and if they struggle with alcoholism, they still have something they can enjoy,” Philip said.

Even better, Bravus Brewing Company beers are tasty, as well.

“One woman said ‘If your beer gets better, I’m going to have to marry it,’” Philip said with a laugh.

Philip shares a story he received from a woman whose husband, a veteran, had PTSD. When he drank, he became an unlikeable person. She wrote to tell Philip that he was under control since he found Bravus Brewing Company beer. She told Philip that she and her husband thanked him.

No matter why they enjoy the beer, Bravus Brewing Company has found plenty of fans.

“That was something I never expected going into this,” Philip told us.

Though the brewery has expanded its offerings considerably in its five years in operation, Philip and his team have plans to continue building on its non-alcoholic offerings. Next up, the brewery wants to enter the NA wine and spirits arena.

“We were the first to do NA beer in the United States, but that was just the beginning for us,” Philip said.