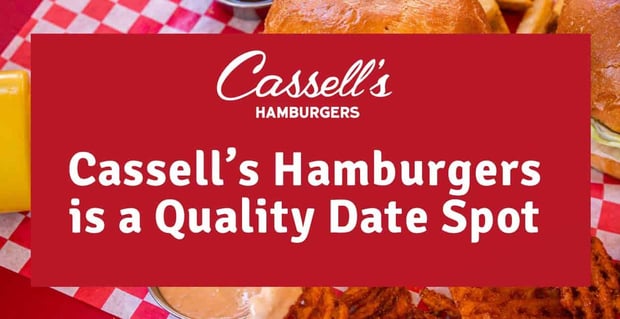 The Short Version: Since its founding in 1948, Cassell’s Hamburgers has impressed Los Angeles foodies with its quality ingredients and affordable prices. The kitchen staff shows enormous attention to detail by grinding the meat for its burger patties in-house and making all sauces from scratch. Cassell’s Hamburgers has hosted countless date nights across multiple generations, and its classic menu can hit the spot for couples looking for a sizzling night out.

In 1948, Al Cassell opened a small burger joint in Koreatown, Los Angeles. Cassell’s Hamburgers had all the trappings of a classic 1950s diner. The lunch counter served cheeseburgers and milkshakes (but not fries), and customers lined up out the door to get a taste of the restaurant’s fresh ingredients.

Al was a stickler for quality. He ground the beef for his burgers in-house, and he also made mayonnaise and lemonade from scratch.

Cassell’s Hamburgers has been tantalizing people’s taste buds since 1948.

After Al passed away in 2010, the future of this iconic L.A. burger joint became uncertain. Cassell’s Hamburgers was in need of an update, and that’s when restaurateur Christian Page came on the scene.

Christian took over the brand and partnered with Jingbo Lou of Hotel Normandie to start renovations that would bring something new to the old-fashioned diner. The salad bar was replaced with a full-service cocktail bar, and the menu expanded to include breakfast items, pies, and coffee.

By December 2014, Cassell’s Hamburgers had reopened in a new location on the ground floor of the Hotel Normandie in Los Angeles. It has since added two more locations in Downtown Los Angeles and Rancho Park.

Christian said it was important to him to keep the essence of what Cassell’s Hamburgers was all about — the team still grinds its own beef and makes its own mayo — while adding something extra to turn people’s heads and give them a reason to come back for seconds.

Cassell’s Hamburgers is a time-tested burger diner that has enjoyed new life in the dating scene as couples rediscover its great food, low prices, and casual atmosphere.

People of all ages and backgrounds have flocked to Cassell’s Hamburgers to celebrate special occasions, spend time with loved ones, or just get a good, affordable meal. The burger joint has provided a space for all sorts of social interactions — including Tinder dates.

Cassell’s Hamburgers has long been a favorite first date location because it’s casual and low-priced. Couples aren’t going to be stuck waiting on their food, and they don’t have to worry about bantering with a waiter. They can simply pick up their food at the counter and dig in.

Couples can share a memorable meal for an affordable price at Cassel’s Hamburgers.

“You can be relaxed on your date,” Christian said. “It’s not so formal, so you can focus more on yourselves and each other.”

Daters enjoy that they don’t have to spend a fortune to enjoy quality food, and that they don’t have to stick to a set time frame. Cassell’s Hamburgers offers a unique laid-back atmosphere where it’s easy to dip out once you’ve finished your burger or suggest getting another round of drinks or milkshakes if you want the evening to last a little longer.

The Cassell’s team members make a point to give customers their space and provide a low-pressure and down-to-earth environment where people can be themselves.

“We get a ton of repeat guests. It’s great being part of the neighborhood and seeing people keep coming back,” Christian said. “There’s a lot of competition to be one of the top go-to burger spots in L.A., and I’m super proud that we broke through and everybody loves it.”

From its earliest days, Cassell’s Hamburgers made a name for itself by promoting quality ingredients and home-made recipes, and that hasn’t changed a jot under Christian’s leadership.

The Cassell’s Hamburgers menu may have a few more items than it used to, but its cheeseburgers remain the star of the show.

You don’t have to visit an upscale restaurant to enjoy a mouth-watering burger.

A lot of thought, time, and preparation goes into each ingredient used in the Cassell’s Hamburgers kitchen, and everything is made as fresh as possible. The restaurant uses ethical sources, including Naked Truth and Chino Valley Ranch, to back the menu items.

Many L.A. food critics have praised the culinary team for its flavors and presentation. Restaurateur David Cheng even declared the Patty Melt to be one of the best in the world. “They have this different way they cook the cheese,” he said. “I highly recommend it.”

Whether you’re hankering for a spicy breakfast burrito or a classic burger with all the fixins, Cassell’s Hamburgers puts in a lot of effort behind the scenes to satisfy people’s cravings and make every bite something to remember.

Cassell’s Hamburgers features a variety of house sodas, milkshakes, and coffee to pair with a meal, or customers can go up to the bar to get beer, wine, shots, or cocktails on demand.

Cassell’s Hamburgers has been a social and dating hotspot in Los Angeles since 1948, and it has weathered all sorts of challenges — but none as impactful as those of 2020. In the wake of the COVID-19 pandemic, Cassell’s has had to adapt quickly to provide safe dining options for the community.

For over six months, Cassell’s has been unable to welcome customers inside its diners, so it has had to rely on takeout and delivery orders instead.

Cassell’s Hamburgers in Koreatown has an outdoor patio where takeout customers can eat their meal. The tables have been spaced apart in compliance with social distancing. Many couples actually enjoy this arrangement because it gives them a quiet and private space to savor good food, good weather, and good company.

“Everything is about patio dining right now,” Christian said. “That’s been huge for us, but we look forward to welcoming people back to indoor dining in the coming year.”

Due to COVID-19 restrictions, only the Koreatown location is currently taking orders. The other two locations are temporarily closed.

During the pandemic, customers can get their burger fix by making a takeout or to-go order online.

Cassell’s Hamburgers has expanded its takeout menu to include whole pies made fresh every day. These pies can be a wonderful way to surprise a loved one during a date at home. The decadent chocolate peanut butter pie is an indulgent crowd-pleaser, and it also happens to be completely vegan and gluten-free.

The takeout menu also includes six-pack and 12-pack burger kits that are perfect for throwing a family barbecue or planning a Friday dinner date with leftovers that last through the weekend. Many customers have enjoyed bringing Cassell’s Hamburgers into their home and using its ingredients to upgrade their mealtimes.

Plus, Cassell’s Hamburgers is currently offering a selection of to-go cocktails, beer, and wine for customers over 21.

Planning a date at Cassell’s Hamburgers is a great way to bring quality to your meal without overly taxing your budget. Generations of L.A. daters have chosen Cassell’s as their go-to place for a first date because it’s casual, it’s lively, and it’s just plain delicious.

Throughout the decades, Cassell’s Hamburgers has been committed to serving quality food and offering a good value to customers. Those principles have been the secret sauce to this burger joint’s enduring success, and daters can expect it to continue bringing juicy burgers and thick milkshakes to the table for years to come.

“You’re getting something really fresh, really substantial, really high-quality, and it’s not going to cost you an arm and a leg,” Christian said. “What better way to lift the veil than shoving a cheeseburger in your mouth on a first date.”