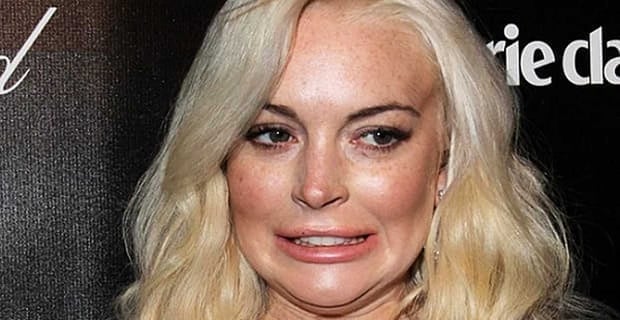 What about Jennifer Aniston? She still looks hot and sexy at 45 years old, but I wouldn’t want to sleep with either of those women. I’d find it almost a cliche.

I hate to admit this, but a celebrity I’d love to have sex with is…

That’s right. I said it. I’d love to have sex with Lindsay Lohan.

According to the media, she’s only slept with about 5,000 people. She’s ravished men, women, dogs, cats and who knows, but just look at her! She’s so gaudy, so dirty and so wrong in every way shape and form.

She’s probably the kind of woman who stalks you after you sleep with her. If you don’t text her, she freaks out and starts following you. She probably starts banging on your door at midnight or turns up at your parents’ anniversary party drunk and kicking off.

But just imagine what sex would be like with Lindsay Lohan! Lindsay Lohan is like the female version of Charlie Sheen.

“She’s the type of woman you’ll get to

live out every sexual fantasy with.”

They call her a slut and a whore, but damn she’s hot. I don’t know what it is. Every time I look at her, I just see naughty girl written all over her.

Sure Jennifer Aniston is hot, but she’s still the sweet, adorable girl from “Friends.” She’s amazingly sexy, but you’re not going to have rip-roaring sex with her in an elevator.

Lindsay Lohan, on the other hand…

Think about it for a moment. Which celebrities are you kind of embarrassed to fantasize about? Let’s not go for the obvious here. I put my balls on the line here, so I want you to do the same. Which forbidden celebrity would you love to have sex with and why?

Share your fantasies here and let’s have some fun today!

How to Tell Her What You Want in the Bedroom

Are You a MILFaholic?

6 Ways a Prostitute Could Save Your Marriage