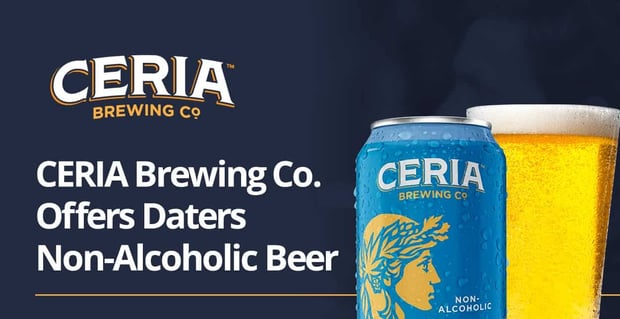 The Short Version: CERIA Brewing Co. has perfected the art of crafting delicious non-alcoholic beers. Its complex and hoppy flavors can satisfy a beer drinker’s taste buds, and it doesn’t cause nasty hangovers or dehydration. Couples can give each other the gift of guilt-free drinking by sharing a six-pack of CERIA Brewing’s finest ales. And they don’t even have to be 21 to enjoy it!

Many fun experiences start with a simple invite: Want to grab a beer? But sometimes couples find out the hard way that alcohol isn’t always the best wingman on a date night.

The first round of beers may have a couple feeling relaxed with each other, but a few too many could lead them down a path of ranting, oversharing, or — worst of all — vomiting. None of which is great dating etiquette.

CERIA Brewing Co. expertly removes the alcohol from its craft beer, so it can be enjoyed anywhere.

Fortunately, CERIA Brewing Co. has offered a solution to this dating dilemma by brewing delicious non-alcoholic beers that deliver the hoppy taste people love without causing inebriation or hangovers.

Brewmaster Keith Villa, Ph.D, founded CERIA in 2018 to give beer lovers something new to try. This Colorado brewery has recognized the growing demand for alternative craft beer in the U.S., and it offers both non-alcoholic and cannabis-infused brews (currently in Colorado only).

Couples can share the non-alcoholic beer on date nights at home, or they can take a six pack of CERIA to enjoy on hiking trips, fishing days, or sports games. These beverages won’t dehydrate drinkers, and they don’t negatively impact motor skills or impulse control, so it’s a healthier and safer option for active daters.

“Beer drinkers realize it offers the great taste of beer without any downside,” Keith said. “You could say it’s definitely having a moment during a time when health and wellness are on everyone’s mind.”

Giving Drinkers a Hoppy Taste Without a Hangover

Keith said he sees a lot of promise in the NA brews because it offers a taste of indulgence for half the calories and none of the alcoholic content.

CERIA Brewing Co. is a trendy and healthy option for beer lovers.

“Interest in better health and wellness, active lifestyles, and a reduction in alcohol consumption… is fueling this trend,” Keith explained. He told us that non-alcoholic beer sales are currently expanding at an annual rate of 13% worldwide, making it the fastest-growing segment of the global beer market.

CERIA Brewing Company aims to lead this “sober-curious movement” with its tasty and original non-alcoholic beers.

In 2020, CERIA created Grainwave NA, a Belgian-style white ale with a medium body and refreshing citrusy taste. The beer is brewed with blood orange peel and coriander, and then it is dealcoholized using state-of-the-art technology. Each can of Grainwave NA contains only 77 calories, so it’s a great diet option for dating or married couples who want to treat themselves to a cold one.

The Indiewave NA, a West Coast IPA, is another flavorful and alcohol-free option that balances Cascade, Citra, and Amarillo hops with light caramel malts.

“This beer isn’t super bitter, but it’s very hoppy with citrus notes,” said a woman named Catherine in a review. “The aroma is incredible. I especially enjoy it at dinner as it pairs nicely with a lot of foods.”

“It’s a win-win brew that helps adults get more out of life,” Keith said. “While older Americans are motivated to be healthy to avoid illness, younger adults adopt healthy lifestyles and are reducing their alcohol consumption because they want to look and feel better.”

An adult may decide to cut back on their alcohol consumption for health reasons, religious reasons, or other personal reasons. It could be a temporary change (as in, for the nine months you’re pregnant), or it could be a lifestyle change (as in, a sobriety pledge). The problem is that beer lovers can sometimes crave the rich and refreshing flavors of a craft beer. That’s where CERIA comes in.

“Our beers are just like any other great tasting craft beers, except that they have no alcohol,” Keith said. “They allow people to fit into occasions where alcohol is served, but where they choose to abstain.”

Drinking a non-alcoholic beer can be a responsible and healthful choice in some situations.

Non-alcoholic beer is a versatile drink that blends in perfectly whether you’re chilling with friends at a bar or going on a golfing date with a significant other.

There are fewer restrictions about where and when a person can consume a non-alcoholic beer than an alcoholic beer, so it’s easier for consumers to find opportunities to take a CERIA six pack along as their main refreshments.

Whether they’re headed to the beach, the mountains, or a public park, couples can pack CERIA’s beers on their dating adventures to ensure they’ll be sober enough to drive home when they’re done hiking, fishing, surfing, or snowboarding.

Non-alcoholic beer is plant-based and can offer some health benefits to the drinker. The bioactive ingredients in hops and grains can nourish the body with good minerals and phenolic compounds. Keith also told us CERIA’s NA beer can be great as a post-exercise drink because of its natural carbs, sodium, and fluid makeup.

That means active couples can take CERIA’s beers on their camping trips or boating days as a refreshing and hydrating alternative to regular beer.

For years, CERIA Brewing Company has endeavored to change the way people consume beer and give them more options than ever before.

Food Dive named CERIA Brewing Company the Startup of the Year in 2019. Its feature article praised the rapidly growing business, saying, “it makes sense for CERIA to diversify its portfolio with a non-infused product.”

CERIA Brewing: A Smooth Way to Bring Beer Lovers Together

CERIA Brewing Co. looks out for the interests of beer lovers and produces high-quality beverages that don’t contain a drop of alcohol. That way, customers can bring their favorite drinks to any social gathering or date activity.

By sharing a pack of CERIA’s craft beverages, couples can savor hours of conversation and romance — without waking up with a headache the next day. It’s a great opportunity to show you care and have a fun, sober date at home or in the great outdoors.

“Beer has always had an essential role in our culture at the center of celebrations, connections, and even relaxation,” Keith said. “An NA beer helps people of all ages stay in control.”

CERIA Brewing Company is headquartered in Arvada, Colorado, and run by a husband-and-wife team who share a love of cold beer. Keith and Jodi Villa started out by selling cannabis-infused beer locally in 2018. Now they offer non-alcoholic brews across the U.S.