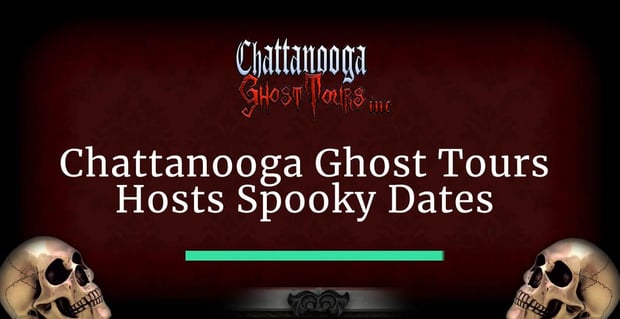 The Short Version: Chattanooga, Tennessee, has a storied history so vibrant that a few of its long-dead inhabitants may still be hanging around. At least, that’s what the locals say. Chattanooga Ghost Tours takes believers and nonbelievers on a journey through history. The Ghost Hunt explores paranormal occurrences, while the Murder and Mayhem tour recounts the city’s most famous crimes and unsolved mysteries. Couples searching for an off-the-beaten-track date can take the Chattanooga Ghost Tours and go on a memorable adventure.

Chattanooga Ghost Tours is famous for giving guests goosebumps at haunted hot spots in town. It’s not unusual for a sighting, a feeling, or a strange something to happen during the course of a tour.

The tour leaders keep track of ghostly occurrences in an online blog. The blog shares stories like the one about the soldier ghost who regularly appears at the Citizens Cemetery. Or the one about the time a picture was snapped showing a shadowy figure hiding among the trees.

Chattanooga Ghost Tours explores the spooky side of history.

“[The guest] saw what appeared on the photo and immediately showed it to our guide Donnie right after taking it, so for those naysayers who claim pictures are doctored, there was no time for that,” according to the blog post. “We are very glad the ghosts there appear comfortable with sharing the space with our guests from a respectful distance!”

Chattanooga Ghost Tours was founded by Amy Petulla to take people into the mystery and the history of the city. According to Amy, spirit activity tends to spike on full moon nights and in October.

Couples can shake up their date nights by signing up for a tour led by paranormal experts. The Ghost Hunt uses scientific equipment, including electromagnetic field meters, temperature guns, and a periscope to identify the presence of otherworldly beings. Not all tours are about the hunt, though. The Murder and Mayhem Tour focuses more on storytelling and sightseeing, with plenty of opportunities for ghost sightings along the way.

Couples Learn About the City’s History

Chattanooga Ghost Tours was the first tour of its kind in the city. Amy said she had gone on many ghost tours with her children while on vacation, and she wanted to bring the ghost-hunting experience closer to home.

After practicing law for 20 years, Amy retired and decided to see if her hometown had enough ghosts around to make a worthwhile tour. She did a lot of research and discovered that Chattanooga had a rich haunted history.

“It turns out there are plenty of ghosts here!” she told us with a laugh.

A good ghost story can make sightseeing and dating in Tennessee even more fun.

After collecting stories about the city’s history and its ghosts, Amy decided to start hosting tours under the name Chattanooga Ghost Tours.

Many guests take tours in hopes of seeing a ghost, but others are simply curious about Chattanooga’s history or they’re looking for a night’s entertainment during their stay. The company offers two types of tours: One is for diehard ghost hunters and the other is for history buffs who aren’t necessarily keen to come face to face with an apparition.

“I’ve found that people have different ideas about what a ghost tour should be. Some people want to keep ghosts far away, while others really want to have an experience,” Amy said. “We do thorough descriptions so everyone knows what they’re getting.”

The Murder and Mayhem Tour is more in line with a traditional history tour with some ghost stories and potentially a few shadowy sightings along the way. The Ghost Hunt, on the other hand, chases after fantastic phenomena and puts people in touch with the paranormal.

Chattanooga Ghost Tours is a company rooted in historical fact, but it’s the tour guides who make the story come to life and add their own intriguing experiences and ideas into the mix.

“I hire fantastic actors to be our guides. Paranormal people want to do it, but they’re not as focused on entertainment. People go on ghost tours to be entertained,” Amy told us.

Seek Out Ghosts with Your Significant Other

Some of Chattanooga’s most famous ghosts haunt the places that made the city a major stop on a trade route along the Tennessee River.

The Delta Queen Riverboat Hotel is said to be haunted by Captain Mary B. Greene, one of the earliest riverboat captains in the United States. Passengers on the ship have reported seeing Captain Mary in their cabins.

Amy said she knows a lot about Chattanooga’s ghost stories. She even co-wrote a book called “Haunted Chattanooga.” The book tells stories that’ll raise goosebumps on people’s skin. Then Chattanooga Ghost Tours actually goes to the cemeteries and historic sites described in those pages.

Both locals and tourists enjoy strolling through the city with Chattanooga Ghost Tours. The tours tend be fully booked in the spring and summer months, when it’s warm outside, but some ghost-loving locals brave the chilly weather in October for the chance to see a Chattanooga ghost.

“We have a lot of people get ghost pictures on our tours!” Amy said.

Couples can see another side to the city by going to some creepy locations at night. The Ghost Hunt explores a lot of haunted areas, including the 130-year-old University of Tennessee campus and the Citizens Cemetery where the city’s founding fathers are buried.

Adults on the Ghost Hunt can use ghost-hunting technology and learn the tricks of the paranormal. The equipment on hand ranges from a light sensor to the Ovilus X, a device that promotes communication between the living and spirit world.

“Our Ghost Hunt is more like the investigations you see on TV with the equipment. That’s where our guests actually get to use the equipment,” Amy told us.

Amy’s work in tracking down the city’s most memorable ghosts has made Chattanooga Ghost Tours a hit with locals and tourists. In 2019, the tour was named one of the top 10 ghost tours in the country by USA Today. Country Living Magazine also added it to its 20 Ghost Tours Across America That Will Scare the Pants Off of You.

A lot of couples decide to join Chattanooga Ghost Tours to test their courage and set aside their skepticism. It’s a fun paranormal-friendly activity for a date night, and it’s a great way to foster intimacy and create a strong connection — hopefully not with a ghost!

“A little scare is a great excuse to snuggle up,” Amy told us. “You get to find out all about a city, and it’s a great way to walk off dinner while you’re having fun at the same time.”

Looking ahead, Amy said she and her team are developing a new type of ghost tour that combines paranormal equipment, history, and storytelling in one dynamic experience.

“Folks have been asking for a combo between the ghost tour and the hunt, so that’s my main thing that I want to get going sometime soon,” Amy said.

Amy made a sharp career turn from the law to the paranormal, and she said she couldn’t be happier with how things have turned out. As the head of Chattanooga Ghost Tours, Amy has made a case for the mysterious and opened people’s minds to the possibility that the city’s history isn’t completely dead and buried.

“It’s very fulfilling. I like giving people joy — and it’s a lot less stressful. I love Chattanooga, and it’s a great way to promote the city as well,” she told us.