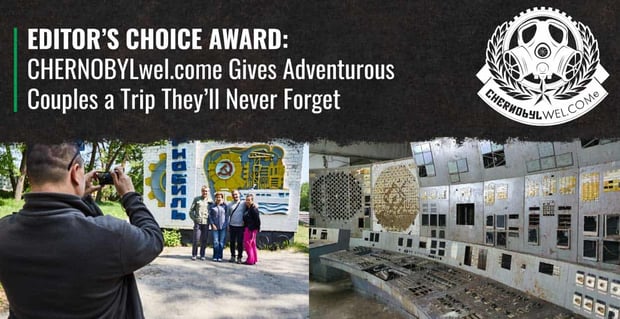 The Short Version: For over a decade, CHERNOBYLwel.come has organized tours to one of the most famous disaster zones in the world — Chernobyl. Despite what many people may think, it is safe to visit Chernobyl, and these tour guides hand out free dosimeters so visitors can check the radiation levels for themselves. CHERNOBYLwel.come has captured people’s imaginations with its history lessons, nature hikes, and stargazing nights, so it’s no wonder that many couples have sought out these tours when looking to get away.

Most people know the tragic history behind Chernobyl, a Ukrainian city devastated by a power plant explosion during the Cold War, but few people have witnessed the untamed beauty of its present.

The city’s story didn’t end in 1986. Nature has slowly but surely reclaimed the ruins, and some settlers have come to live off the land. Chernobyl has even become a tourist destination for some intrepid souls.

CHERNOBYLwel.come tours can give couples the opportunity to learn about the past.

In 2000, a PhD student named Dominik visited Chernobyl for the first time and immediately fell in love with this place lost in time. As a journalist, he was fascinated by the stories waiting to be uncovered here, and he was surprised to learn that it was safe to visit — he and his friends didn’t need the respirators they carried.

As soon as he got back from his trip, Dominik said he longed to return to Chernobyl, so he began organizing small group tours. Dominik enjoyed welcoming newcomers to this eerie ghost town, and he started gathering background information and old photographs to make the place come alive for visitors. His hobby eventually grew into a full-fledged tour company called CHERNOBYLwel.come.

Today, Dominik and 16 other guides invite adventurous couples and individuals to explore Chernobyl and get a glimpse into the past.

“It’s like time traveling — you are going back 30 years,” Dominik said. “I remember stepping off the bus on my first trip, I got goosebumps. I’m fully in love with the spirit of Chernobyl.”

Chernobyl is an exciting and romantic destination where people can learn the lessons of history, marvel at the power of nature, and discover their own intrepid spirit. CHERNOBYLwel.come tours offer many unforgettable experiences, and the site can give couples a quiet space to reflect on their own lives and talk about what truly matters to them.

A Deep Experience Exploring Relics of the Soviet Union

CHERNOBYLwel.come offers two-day and one-day tours of the city as well as group tours of the power plant, and it can arrange private tours for one to five days for couples who are really hardcore. The private tour includes access to no-go zones with an expert guide by your side from dawn until dusk.

All CHERNOBYLwel.come tours include meals, accommodations, and insurance. Tour groups are limited to no more than 15 people. The team puts safety first and gives everyone a free dosimeter so they can see for themselves how low the radiation levels are. The website offers an extensive explanation about why Chernobyl is safe to visit.

Chernobyl is an exciting and mysterious tourist destination in Ukraine.

By conducting tours throughout the city, CHERNOBYLwel.come can challenge people’s preconceived notions about Chernobyl and show another side to this former disaster area.

“Now it’s a place of hope. You can see how nature is coping with man-made relics,” Dominik said. “There is a lot of good after the disaster happened there.”

Most Chernobyl tours are conducted in English, but CHERNOBYLwel.come has translators for Russian, German, Spanish, French, Italian, Czech, Slavak, and Polish speakers.

Couples can always reach out to the CHERNOBYLwel.come team by phone or email to make special requests or inquire about the nature of the tours.

The CHERNOBYLwel.come team understands that many first-time Chernobyl visitors may have a lot of questions or concerns, and they’re on hand to provide assistance on everything from booking travel arrangements to taking safety precautions. Their level-headed assurances can set couples at ease as they prepare to take the trip of a lifetime.

Dominik said he was initially nervous about visiting Chernobyl but found it wasn’t nearly as intimidating or scary as he’d imagined. Now the empty city is his favorite place to get away from it all and appreciate all the good things and good people in his life.

“My first night there was very romantic,” he said. “It was very calm. The experience made me look at my life from a different perspective.”

How a Unique Tour Can Inspire Wonder, Romance & Hope

Chernobyl allows visitors to glimpse the world of the Soviet Union during the Cold War, and it can be an emotional experience. People often get chills as they step through abandoned buildings where it’s easy to picture people living and working long ago.

During its tours, CHERNOBYLwel.come tells many stories about the people who lived in Chernobyl and what they experienced during the radiation leak and fallout.

Many people are fascinated by the history, and they have a good time wandering through the post-apocalyptic ruins with a knowledgeable guide in the lead.

Many daredevils and adventure seekers find themselves drawn to Chernobyl.

“This experience completely exceeded expectations, a large part of this due to our guide who brought the sites to life,” said one TripAdvisor review. “We were not disappointed — the books, pictures, videos just do not do the place justice. You have to see it for yourself, and I would recommend you use this company.”

“We embarked on this trip together with my wife for an ‘alternative’ honeymoon together,” Richard L. said. “CHERNOBYLwel.come did a great job of facilitating this experience.”

Many couples create unforgettable memories and share touching moments while on a Chernobyl tour, and these peaceful yet grim surroundings can spark deep conversations and connections.

One couple even got married in Chernobyl, and Dominik said he was honored to be a witness and even more pleased when the couple returned for another tour a few years later. “Those are the kinds of moments you remember for the rest of your life,” he told us.

Whether they’re exploring an old cinema, meeting Chernobyl settlers, or gazing up at the starry sky, visitors can enjoy a once-in-a-lifetime experience thanks to CHERNOBYLwel.come, and they can carry its important lessons with them when they go back home.

“I started to value my own life much more after visiting Chernobyl,” Dominik said. “Everything I have today — my family and the place I live — can be gone in just a few moments. And so I really appreciate that I have it today.”

CHERNOBYLwel.come has made Chernobyl more accessible to people who are curious about this old-world city and want to learn its secrets. Professional tours can help couples escape the hustle and bustle of everyday life and gain a new perspective on the world.

Over the next few years, the CHERNOBYLwel.come team intends to expand its tours to more challenging and off-the-beaten path destinations. Dominik said he’s looking into Fukushima in Japan and parts of North Korea and Kazakhstan as potential attractions for adventurous travelers.

Dominik is also planning to make his Chernobyl tours more tech-friendly and multilingual to enhance the overall experience for people from all walks of life.

“It’s a mission, not a job,” said Dominik. “You go there because you love this place, and you love uncovering the stories and the place for people who haven’t experienced anything like it before.”