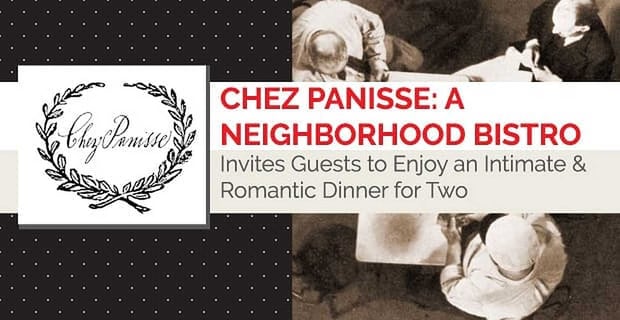 The Short Version: Every once in a while couples want to treat themselves to something more refined than a last-minute dinner date of pizza and beer. That’s what Chez Panisse is there for. This upscale restaurant and café in Berkeley, California, has made a name for itself for its locally sourced foods and private atmosphere. Chez Panisse is available by reservation only and features a daily prix fixe menu of appetizers, entrées, and desserts. This neighborhood French bistro is always cooking up something special with which to wow diners of all ages. Whether you’re celebrating a wedding anniversary or looking for an impressive place to take a date, you can make a reservation at Chez Panisse and have a carefully crafted dining experience worth savoring.

Rebekah T. is a California foodie whose friends know her as Cookie. She enjoys exploring the local culinary scene and writing reviews about her favorite restaurants. She’s part of the Elite 2018 on Yelp and has over 4,500 people following her reviews, so she clearly knows her stuff.

In January 2018, her boyfriend took her to Chez Panisse for dinner as an anniversary present. “I’ve been waiting to go for years,” she wrote, “so my heart skipped a beat when we arrived at the gate for our reservation.”

Since 1971, Chez Panisse has tempted guests with elaborate three- and four-course meals made with local, organic foods.

The couple sat in a cozy corner table, and Rebekah said the restaurant’s dim lighting helped set the mood. They had a butter lettuce salad with crème fraiche, shrimp, and cherry tomatoes to start. According to Rebekah, the dish was simple yet delicious.

For their main meal, Rebekah had the northern halibut, and her boyfriend had the pappardelle with chanterelle mushrooms. At the end of the night, the waitress surprised the couple with a dessert topped with a banner reading “Happy Anniversary.”

Many couples choose Chez Panisse as their go-to date destination for anniversaries or special occasions because of its fine cuisine and classy atmosphere.

According to the website, “For over 45 years, Chez Panisse has invited diners to partake of the immediacy and excitement of vegetables just out of the garden, fruit right off the branch, and fish straight from the sea.”

Opened in 1971 by a Small Band of Friends in Berkeley, California

At the tender age of 27, chef Alice Waters founded Chez Panisse alongside two other food-loving friends. The three women named their restaurant after Honoré Panisse, a fictional character from a 1930s film trilogy (“Marius,” “Fanny,” and “César”) about life in Marseille. The name was meant to evoke the generosity of spirit and enthusiasm for life that the owners hoped to embody with original farm fresh cuisine.

They wanted to create an intimate dinner-party atmosphere where people could laugh, dine, and enjoy themselves. So the founders bought an arts and crafts house along Shattuck Avenue, set up a French restaurant in the quaint two-story building, and have been delighting people’s palates ever since.

The opening of Chez Panisse in 1971 marked the beginning of the farm-to-table movement in California. “We were three women. We were not chefs. We never operated the restaurant the way we were expected to,” Alice said in an interview with Time magazine. “We cooked the way we cooked at home, and, because we only had one menu a night, it had to be really good.”

Chez Panisse’s name is an homage to a French film character who had a zest for life.

In 1980, the pioneering chefs at Chez Panisse created the first California-style pizza baked in an in-house pizza oven and topped with local vegetables and meats.

Gourmet magazine recognized Chez Panisse as the Best Restaurant in America in 2001. Then, in 2007, Alice Waters won Restaurant Magazine’s Lifetime Achievement Award, which named her one of the most influential figures in modern American cooking. She’s also the first woman to win the James Beard Award for Outstanding Chef.

Now a world-renowned chef, Alice maintains a quality-first kitchen that serves up remarkably fresh, original, and innovative dishes to guests. She relies on a skilled and dedicated team to carry out the vision she had over 40 years ago. Restaurant chefs Amy Dencler and Jennifer Sherman, Café chefs Beth Wells and Nathan Alderson, and pastry chefs Mary Jo Thoreson and Carrie Lewis plan and create incredible meals for guests from all walks of life.

From the moment you walk in the doors of Chez Panisse, you can put aside your cares for the evening and indulge your senses in an upscale culinary adventure.

A Fixed Menu Available by Reservation Only

Chez Panisse is a beloved dining establishment, and its tables book up quickly. If you want a seat at the table, you should call well over a month in advance. You can eat lunch or dinner upstairs in the café, which has a full menu of unique starters, entrées, and desserts. The downstairs restaurant is open for dinner only and has a prix fixe menu designed to feature sustainably sourced, organic, and peak-of-their season fruits, vegetables, poultry, and fish. The first seating is at 5:30 p.m., and the second seating is at 8:00 p.m.

The restaurant’s prix fixe menu costs $100 Tuesday through Thursday and $125 Friday through Saturday. You can book a table at the restaurant on a Monday to save some money. Monday night dinners give guests three-course meals for $75. These meals are typically simple and rustic with a focus on regional flavors.

Diners should note that these prices do not include beverages, sales tax, and a 17% service charge.

The Chez Panisse menu changes twice a day to reflect seasonal ingredients and trending dishes. The wine list also changes daily and includes a variety of price points from a $10 glass of zinfandel to a $380 bottle of sparkling white wine.

Whether you’re visiting for Valentine’s Day or another special event on the calendar, you’re sure to have a lovely time in this quality-driven restaurant.

You can read Chez Panisse’s Yelp reviews to get a taste of what you can expect at this acclaimed eatery in northern Berkeley.

San Franciscan Amy G. said she took her boyfriend to Chez Panisse for his birthday, and they were both wowed by the food and service. “I was very impressed by the very special ambiance, by the execution of the majority of dishes, and the really nice and bright open kitchen,” she said.

Alice Waters has championed sustainable agriculture for decades. She has written 16 books about the importance of using fresh ingredients when preparing delectable meals. Her memoir “Coming to My Senses: The Making of a Counterculture Cook” details her journey from a 27-year-old starting a restaurant to an empowered food activist.

In 1995, Alice founded the Edible Schoolyard Project to promote free lunch programs and sustainable food curriculums in public schools across the country. Students become more aware about what they put in their bodies by growing, harvesting, and preparing fresh meals through this nonprofit program. Alice has launched and sustained many similar projects aimed at schoolchildren; she started the Yale Sustainable Food Project in 2003 and the American Academy in Rome in 2007.

President Obama recognized Alice Waters’ determined and groundbreaking efforts in the food industry and awarded her the National Humanities Medal.

Alice has worked hard to become a notable chef, author, and activist in California, and her leadership as Executive Chef inspires the culinary team at Chez Panisse. Their long-standing focus on local, fresh, and organic ingredients has changed the Californian food industry in significant ways. Today, Chez Panisse has established a growing network of food suppliers who prioritize environmental sustainability and unparalleled quality.

Chez Panisse is a Nuanced Culinary Experience for Couples

For over 45 years, Chez Panisse has blown people away with its high-quality foods and high-caliber service. Countless couples have booked a table here to celebrate birthdays, holidays, and anniversaries because Chez Panisse specializes in serving up an unforgettable dining experience.

“Chez Panisse will now always remind me of our romantic anniversary dinner and remain close to my heart,” said Rebekah T. in her Yelp review. “I hope to spend many more special occasions here.”

The culinary team’s commitment to fresh ingredients and sustainable cooking has revolutionized California’s food industry and raised the bar in the restaurant scene. From the beginning, Alice Waters set high standards for Chez Panisse because she loves food and believes in its power to bring people together. Daters can stop by her French-inspired restaurant for authentic and exquisite meals based on sustainable agriculture.

In the words of the Chez Panisse website, “Alice and Chez Panisse are convinced that the best tasting food is organically and locally grown, and harvested in ways that are ecologically sound by people who are taking care of the land for future generations.”