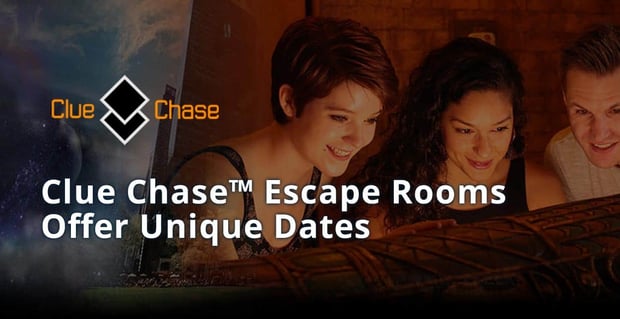 The Short Version: Escape rooms offer a unique date night experience for couples who enjoy bonding while solving puzzles. Couples in New York City often choose Clue Chase, which has four themed rooms, including Moonshine Madness and Houdini’s Workshop. After selecting a theme, couples can decide if they want to play privately or with a group — either way, it is an exhilarating 60-minute experience. For providing New York City daters with fun, challenging escape rooms, Clue Chase earns our Editor’s Choice Award.

It’s 1926, and you and your partner are searching through Harry Houdini’s lab for the Artifact — “the only real source of mystic power in this world.” You only have an hour to comb through Houdini’s belongings and solve puzzles before the Artifact is lost forever.

Or, perhaps it’s 2023, and you and your partner are called on to break into Dr. Time’s lair. Though Dr. Time is a superhero, you realize that she is actually using her time-traveling abilities and crime-solving prowess for evil, not good.

Of course, those scenarios aren’t possible in real life. Couples can’t time travel, no matter how much they’re searching for something different to do on a date night.

But they can solve those mysteries in an escape room at New York City’s Clue Chase.

Couples can liven up date night by solving puzzles in a Clue Chase escape room.

Its four themed rooms offer a fresh experience for couples looking to mix things up. The basic premise is that guests are locked in a room — with at least one other person — and must find clues and solve puzzles to get out.

“You go through a series of rooms and link objects. Say you find a statue on one side of the room and a painting on the other side of the room. You’ll figure out that you need to put this red book between the blue and the green book to unlock the bookshelf,” said Ross Arnold, a Game Designer and Manager at Clue Chase.

Designing Challenging Rooms for Any Group

Escape rooms, which combine logic and word puzzles with immersive theater performances, have become popular around the world. Though the concept only started six or seven years ago, they are much more involved than just finding a series of locks to open. Instead, the rooms transport people to thematic worlds for an hour.

“Now, escape rooms are atmospheric and theatrical. Some rooms may have actors in the room that are part of the story. There are animatronics in the room, too. But it’s still the same principle as it always was with a lot of bells and whistles,” David told us.

And the Clue Chase design team is dedicated to keeping up with high-tech escape room trends.

Nearly five years ago, David, Clue Chase’s owner, set up the first four rooms with help from his family. Ross was first brought in to make videos for the company’s website but ended up helping design rooms use more sophisticated technology.

The Clue Chase team uses its extensive knowledge to design all of the company’s unique rooms. They don’t outsource any components to others or buy ready-made escape rooms. Instead, the game operators all have their say in creating the themes, puzzles, and other features.

Couples can choose rooms with names that include Moonshine Madness, Houdini’s Workshop, Guardian of Gotham, and Pirates of the Bermuda Triangle.

“We like to ask our staff to use their skills and creativity. Most of the people running the rooms have filmmaking, comedy, or acting in their background,” Ross said.

Over the years, the company has designed eight rooms, four of which are still active.

Bond by Solving Puzzles with a Partner

Couples have plenty of reasons to choose Clue Chase for date night. Ross suggests that competing together builds a sense of trust while working in tandem to tackle a challenge can offer a feeling of accomplishment.

“You only have 60 minutes to escape the room. Both of you are looking at this problem, and you can’t just step back and figure it out. Instead, you have to just go with your first impulse. That gives you strong moments for bonding,” Ross told us.

Many couples have already discovered how much fun escape rooms can be and have their routines down to solve puzzles quickly and efficiently. While couples can solve a room by themselves, Clue Chase is designed for larger groups. Couples often invite family and friends or decide to be partnered with a larger group.

Even with dozens of escape rooms in New York City, Clue Chase stands out from the crowd. And it has managed to remain the top spot in the city, as evidenced by its glowing online reviews.

“Clue Chase was amazing! I’d never done an escape room before, but from the moment we walked in we were impressed by these guys. The framing device is fun and clever. We loved Savvy, our shady scientist/time travel technician/guide. Very fun puzzles, secret doors, riddles, etc. Will definitely go back to try the other rooms.”

“I’ve done many escape rooms, but Clue Chase has been by far my favorite so far! Really enthusiastic staff (thank you Austin), fun scenario, great use of technology (mobile clue bot), and puzzles that were really cleverly integrated into the scenario.”

Clue Chase is excited to reopen when Covid-19 restrictions are lifted in New York City. In the meantime, the team is working to develop online escape rooms and will continue offering those even when people can visit its locations in person.

“We’re working on some online games, where you play together on Zoom or Skype. Even when everything’s back to normal, it will change how we look at the business. If something happens again, it’s good for us to have virtual products we have available in the future,” Ross said.

And couples looking forward to their next date night away from home can book a Clue Chase escape room for the future.

Escape room newbies often ask Clue Chase about the completion rates of each room. For example, if a room only has a 25% escape rate for parties of 10, couples may decide that they are unlikely to escape if they try it alone.

They may decide to invite a few others to their escape room date night, and that’s one of the biggest draws of the experience — it’s for everyone.

“We get all sorts of people here. A lot of our fans are people in their 20s and 30s. But we’ve also hosted 12-year-old-birthday parties, 80-year-old birthday parties, and everything in between. It is fulfilling to have people laughing, giggling, and screaming out of excitement,” Ross said.