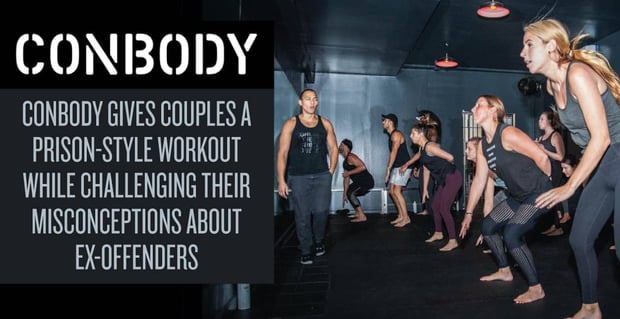 The Short Version: CONBODY offers New York City individuals and couples high-energy bodyweight workouts that get their blood pumping. Its boot camps are popular not only for the results they achieve but also for where the exercise techniques originated. Founder Coss Marte developed the unique CONBODY program while working out and training others in prison, and all of the program’s trainers are former inmates. Additionally, if couples can’t make a class at CONBODY’s Lower East Side location, they can participate from home with online workouts featuring their favorite trainers.

On the Lower East Side of New York City, individuals and couples can choose from a variety of high-end gyms and fitness centers. But one stands out. At this gym, they enter the establishment by descending to a basement facility complete with barbed wire and prison bars. And, before they begin a lesson, they take a mugshot.

Then they participate in one of New York’s most popular workouts: CONBODY, a prison-based boot camp offered at a studio owned and run by former inmates who now help people achieve their fitness goals.

The business was founded by Coss Marte, a one-time inmate who dealt drugs in the same neighborhood where he established his fitness center. After working out in prison for seven years, primarily using his body weight, Coss turned what he learned into a fitness experience.

Despite CONBODY’s popularity with celebrities, including the cast of “The Real Housewives of New York,” its classes aren’t about wearing the right clothes or makeup.

“It’s not a gimmicky class. I’ve been to a lot of studios where it’s all about vanity, and you have to look good to work out. Here, there’s no vanity. You come in, you sweat, and you get a great workout,” Coss said.

Each class, including the online classes, begins with a 10-minute warmup, followed by a mix of high-energy cardio and strength training. Most of the workout routines are elevated by motivational music.

While classes follow a standard structure, each instructor adds his or her own unique spin.

“Everybody trains in my method, but then I give them the creativity to use their own body weight, moves, and routines,” Coss said.

In 2009, Coss was sentenced to seven years in prison. But it wasn’t the prison sentence that had Coss reeling at the time of his incarceration — it was that doctors said his cholesterol was so high that he could have had a heart attack years ago.

“So I started working out in my prison cell, using no equipment, and I lost 70 pounds in six months,” Coss said.

Eventually, he discovered he had a knack for helping others improve their fitness levels, too. During his sentence, Coss helped 20 of his fellow inmates get fit in their cells. Together, they dropped a collective 1,000 pounds.

When Coss was released, he said he had a hard time finding steady work on the outside. Around the same time, he also found that the fitness system he’d developed in prison — using only body weight — was popular with people who’d never been to prison.

“We train people in a unique style, with whole body weight stuff. I took that unique form of working out and said, ‘This is what I want to do,’” Coss said.

He started offering the CONBODY program in parks and other rotating locations, and the demand for his high-intensity and results-oriented classes began to grow. Eventually, his following grew so large that he opened a permanent location on the Lower East Side.

“It has been a true blessing that has even exceeded my expectations,” he said.

Eventually, Coss plans to open a second CONBODY location and franchise the business across the country. Already, he’s had 70 franchisee requests, but he wants to ensure all of the kinks are worked out first.

“I plan to open another shop and to create a model for franchising. I want to bring this around the country and the world,” Coss said.

Couples Can Work Up a Sweat While Helping Former Inmates

In addition to making a name for himself in the fitness world, Coss also wanted to help former inmates get back on their feet after prison.

“I hire people out of the system who have trouble, like myself, finding a job. It’s hard when you come out to deal with the day to day and catch up with the rest of the world,” he said.

Many inmates struggle to find work after they’re released. One report suggested that as many as 60% of former prisoners remain unemployed a year after their release.

“We all come from similar backgrounds, and we feel like we’ve been stigmatized for so long,” Coss said.

Notably, none of Coss’s trainers have ever returned to prison, and many of them have worked at CONBODY for a long time, while others use the job as a stepping stone to enter other fields.

Coss Marte founded his CONBODY after struggling to find a job when he got out of prison.

Though CONBODY’s trainers are all former offenders, their client demographic is much different. Most of the fitness center’s clients are young, affluent women. Coss said clients could learn a lot from the trainers — both about how to change their bodies and how they think about former prisoners.

“We want to change their bodies, mindsets, and their views on incarcerated people,” said Coss.

Partners often come to CONBODY together to hold each other accountable. Coss suggested that it’s a lot harder to give up, or to skip your workout, if you have someone else with you who wants you to succeed.

Even if couples don’t live in New York City, they can still take classes with CONBODY’s trainers through its collection of online workout videos.

CONBODY has helped hundreds of people — both trainers and clients — change their lives, and his clients have collectively lost thousands of pounds.

Many Yelp reviewers describe the experience as transformative.

“CONBODY is by far the best workout class I’ve done in NYC. It’s way more down to earth, the trainers are amazing, and it’s one of the hardest and most satisfying workouts I’ve ever done. I’m in the best shape I’ve ever been after becoming a regular here,” one testimonial read.

Another client was so inspired by Coss’ story that she started working out and lost 50 pounds. Only then did she notice a bump on her breast that she doesn’t think she would have noticed if she hadn’t dropped the weight.

“She says that CONBODY saved her life,” Coss told us.

Four years after he left prison, Coss is still surprised by how popular his workouts have become. He remembers that, when he was first released and told others about his idea for a fitness studio, they weren’t as supportive of his vision.

“I had no one who thought I would make it this far, but I have,” Coss said.

He’s also proud to provide trainers with opportunities they wouldn’t otherwise have.

Something else that Coss didn’t expect when he started CONBODY was how he would connect with current and former inmates worldwide. He said he has visited prisons around the world to tell his story and show what comes after prison.

“And many people tell me that they’ve been inspired,” Coss said.