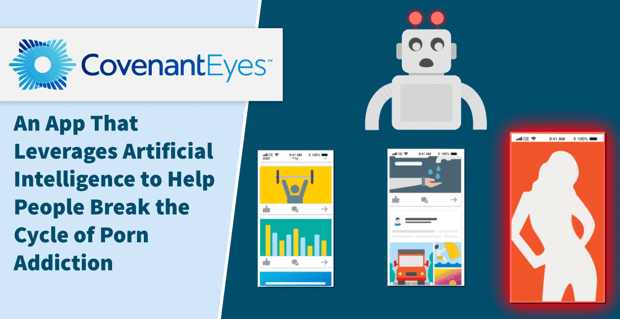 “By the year 2000, I recognized the internet’s dangers for my teenage sons, and filters weren’t enough for my purposes,” Ron said.

An Accountability Partner is By Your Side Throughout the Process

“We call your accountability partner your ally. It is someone who cares about you. The point is to develop a relationship with someone who wants what’s best for you,” Ron says.

If users don’t choose an accountability partner, they can monitor their own pornographic activity.

Users and their accountability partners get mobile screen activity reports with highlighted pornographic activity or “incidents” as they’re called in the app.

“It is the best means of behavioral change. That simple measure of accountability is the most effective way to behave differently,” Ron said.

Over the last 20 years, online content platforms have changed significantly. So, too, have Ron’s content filters. The latest version of Covenant Eyes, released in 2019, includes a sophisticated AI engine that monitors device screens.

“The AI can determine if an image on a screen is pornography. Now, we provide accountability for whatever appears on the screen,” Ron said.

At its most basic level, the AI takes intermittent screenshots of user devices. These images are blurred, however, so that the AI isn’t seeing precisely what users are viewing — pornographic or not. The AI can then determine which images are pornographic and mark them in a screen report. That report, along with those blurred screenshots, is then sent to your accountability partner.

That means that secure sites and content that may have once made it past the content filter are now identified. For example, if a user was talking to someone on a webcam, the app could see if there was pornographic material exchanged. That way, there is no way to work around the Covenant Eyes AI.

Still, Ron aims to make further modifications to the app and ensure that it’s even more accurate.

“We are still building better behavioral change techniques into the program and the reports,” he said.

“They are dedicated to helping people struggling with pornography to overcome addictions — or never start,” Ron said.

Ron has been on a mission to make the internet a safer place for teens and adults since the early 2000s. His foresight into creating accountability tools and filters for online content has made Covenant Eyes useful for many people.

“We’ve received thousands of testimonials. Typically, they say that accountability has taken out the temptation. It’s like someone is looking over their shoulder on their device,” Ron said.

Ron DeHaas founded Covenant Eyes to encourage people to engage in healthier online behaviors with the help of their friends.

Others said that connecting with someone they trust through the app has helped them overcome their struggles, Ron said.

Ron recalled one young man who grew up with Covenant Eyes on his devices.

“He told me that he thought it wasn’t fair for his parents to have Covenant Eyes on his computer, but when he got older, he understood the benefit of not being addicted to pornography,” Ron said.

“We found that families who took the spiritual lives of their families seriously were very successful,” Ron says.

Ron stays committed to Covenant Eyes because of the real impact it has on individuals and families. He encourages parents to use digital protection software on all of their children’s devices, so they can grow up with healthier expectations for relationships and sex.

“So many teens are seeing pornography and saying, ‘This is what a successful relationship is,’” Ron said. “Parents often think they’re intruding on a kid’s liberty if they ask what they’re doing on their computers. But it’s important to teach them differently.”