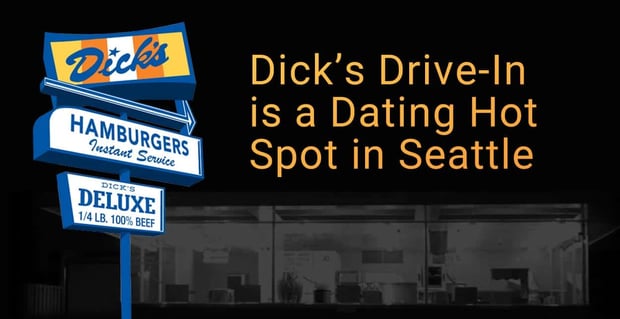 The Short Version: Dick’s Drive-In is a beloved burger joint known throughout the Seattle area for its quality ingredients, friendly service, and community spirit. The Spady family has been running Dick’s for over 65 years and takes pride in sticking to a simple menu that has satisfied customers for generations. Dick’s can give local couples — whether they’ve just started dating or have been in a relationship for years — the chance to make a lifetime of memories over a plate of burgers and fries.

According to family legend, the idea for Dick’s Drive-In Restaurant started when a 29-year-old Dick Spady ordered a burger at a Portland bar and was shocked to see the cook open the freezer, revealing stacks of frozen beef patties.

As a military man, Dick had a passion for efficiency, and he saw an opportunity to make a fast-food burger with superior quality simply by using a few fresh ingredients. He teamed up with two family men like himself and opened the first Dick’s Drive-In on January 28, 1954.

Dick’s is a landmark fast-food place that has served generations of burger lovers.

Dick’s was an immediate hit in the Wallingford District of Seattle. People gobbled up the hot burgers, fresh-cut fries, and hand-whipped milkshakes, and the fast, friendly service kept them coming back for seconds.

Other restaurateurs may have been tempted to turn the fast-food joint into a national franchise, but Dick wanted to stick close to Seattle. He always said it was better to create deep roots in the community, and the Spady family has used that as the guiding philosophy when growing the business.

For over 65 years, Dick’s hasn’t wavered from offering good food at low prices, so it’s no wonder it has become a staple in the Seattle dating scene.

“Dick’s still serves up the best food, at the best price, in the shortest time,” the Spady family said. “Whether the year is 1954, 1994, 2014 or beyond, that is still a formula for success, and a formula that should keep Dick’s food in Seattle’s hearts, minds, and mouths for decades to come.”

Multiple generations of Seattle residents have grown up with Dick’s classic fast-food menu, which has hardly changed in the last 65 years.

Dick’s has stayed true to what works and has focused on making the best possible fast-food burger. Its burgers are made with 100% beef patties that are never frozen. The menu includes traditional hamburgers and cheeseburgers with a few simple toppings and no modifications.

By keeping things simple, Dick’s has streamlined the ordering and cooking process so customers spend less than a minute waiting on their food. This fast service attracts busy professionals, dating couples, and large families who are on a tight schedule.

To complement its burgers, Dick’s serves fresh fries made with Pacific Northwest potatoes. The team hand cuts and fries potatoes all day long to satisfy demand. The fries are sold separately from the burgers, so be sure to speak up if you want some spuds.

Dick’s can offer customers an affordable, nostalgic, and delicious meal that doesn’t take a lot of time to order and devour.

Couples can even end their dates on a sweet note by sharing a milkshake, sundae, and float, all of which are made the old-fashioned way with real ice cream.

The Family-Run Business Has Given $2.2 Million to Charity

Dicky Spady ran his business by three golden rules. First, make a profit by offering a quality product. Second, take care of your employees by paying them top dollar. And, finally, use the profits from the first step to give back to the community.

These principles have been the key ingredients to Dick’s success for generations, and the leadership team continually supports programs that help Seattle succeed together.

Dick’s looks after its employees by offering free healthcare and child care assistance.

The base pay for an employee at Dick’s is $16 an hour, and the benefits package includes 100% employer-provided health insurance, child care assistance, and college scholarship opportunities. Employees who work at least 20 hours a week for at least six months can qualify for a $28,000 scholarship over four years.

In addition to investing in its employees, Dick’s invests in charitable projects that benefit the local community. One of its long-standing donation projects asks customers to “round up for charity” and give their change to a fund that contributes to homeless shelters, food banks, and other nonprofit organizations in Seattle.

Since 1998, the Change for Charity program has raised over $2.2 million dollars for several partnering charities.

When the coronavirus pandemic hit in March 2020, Dick’s launched a charitable effort to deliver burger boxes to Seattle’s hospital workers and first responders. The Hospital Heroes program raised money for 24,000 burger boxes, and Dick’s promised to match those donations and hand deliver 48,000 meals to medical centers, testing facilities, emergency clinics, and other healthcare facilities in the area.

Dick’s has been a celebrated hangout dating back to the 1950s, and some of its loyal customers have been eating there for decades. The Spady family has heard so many touching stories related to the drive-in restaurant that they decided to publish anniversary albums to save some of their favorite customer and employee memories.

Margo Wilson Douglas said she visited the original Dick’s location when she was 7 years old. Her parents lived one block away from 45th Street, and as she grew up, she relished the opportunity to have a 19-cent burger and hang out with her friends. “It was the only place to be on a Friday night,” she recalls. “I love the feeling of ‘going home again’ for a little treat of nostalgia with fries.”

Dick’s can be a good wingman for relationships, and many couples choose to come here as a quick and easy dating activity.

Back in the late 1960s, high school sweethearts Nancy and Sid spent their time having burgers and parking at Dick’s night after night. “We continued going to Dick’s over the next few years because it was a place where we met our friends, talked, and, for those without a date, you could look for one there,” recalled Nancy.

In 1970, the couple were sitting in his two-door Chevy and talking about the future. Caught up in emotion, Sid told Nancy he wanted to marry her, and she said yes right there in Dick’s parking lot.

Dick’s employees have also been struck by Cupid’s arrow on occasion, and some of those working relationships have led to marriage.

A 35-year-old named Heidi Talley said her older brother Jim found love while working as a fry cook at Dick’s. Jim and Kathy had been friendly for six months when Kathy decided to crank up the heat by asking him to an Earth, Wind, and Fire concert.

“She was the one who asked him out, right there at the Lake City location in the back of the store by the dumpster,” Heidi said. “The rest, as they say, is history. They have been married for 20 years and have one child.”

Dick’s Continues to Serve Up Smiles in the Seattle Community

When Dick’s opened in the 1950s, it won over Seattle residents with its low prices, classic food, and fast service. And the team has been flipping burgers and creating memories ever since.

Dick’s is a popular date spot for people of all ages. You’ll see teenagers, families, and retirees all enjoying an old-school burger and fries here. Throughout the years, the drive-in restaurant has carried on the legacy of Dick Spady by maintaining the same straightforward menu and investing its profits into the local community.

“Those of us who grew up with Dick’s know our order, and its proper parlance, by heart,” wrote a Seattle Times food writer in 2018. “Dick’s is Seattle’s hometown hero. Dick’s means something to us, and in a world of homogenized, global chains, it means even more.”