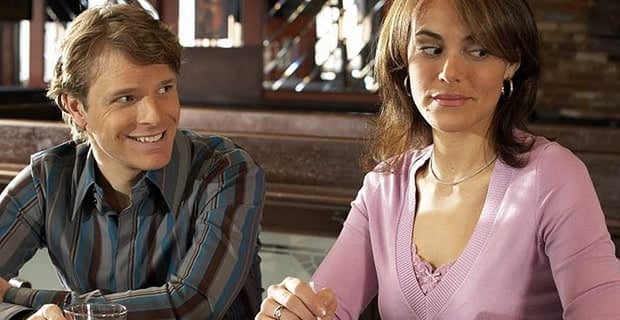 So you’ve met a girl. You two have brief banter and you ask for her number. A big smile spreads across her face and she’s delighted to give it to you. You text her asking her on a date and she accepts.

Now the anticipation builds and you’re anxious about the first date.

The first date is your first real chance to make an impression on a girl – no pressure, of course. While I’m not an advocate of playing it safe, there are certain things girls look for that are definite deal-breakers.

We’ll break them down for you here.

1. Don’t talk about your ex-lovers.

Ah, the most known rule in the book. We hate to beat a dead horse, but for some reason, guys all know this rule but still break it on the first date.

Your date has absolutely zero interest in learning about your psycho ex-girlfriend, so file that away for another time.

At some point you guys will have this conversation, but save it for when she’s more emotionally invested in you.

Yes, you want to show you’re interested in her, but you don’t want to bombard her with question after question.

This is a date, not an interview. Have you ever been compelled by an interviewer? No way.

The worst is when you two only talk about what you’re supposed to talk about and you ask her generic questions like, “What do you do for a living?” or “How many brothers and sisters do you have?”

I’m not saying you should avoid questions all together. Just no rapid firing of one after another, or else you’ll seem too mechanical and not sincere.

The key is to ask her a question, listen to her answer and then comment about what she says. Make each question count.

The problem a lot of guys have is they ask questions without even thinking about where a question could lead.

Asking yes/no questions tends to lead to interview mode, and asking questions that don’t pertain to your own life makes it hard for you to further comment on that particular thread.

“You’d be surprised how many guys go into

a date without even knowing the restaurant.”

3. Don’t take her somewhere too expensive.

Buying a woman’s attention with an expensive dinner comes off as desperate and needy.

The purpose of the first date isn’t to impress her. Assuming you two barely know each other, the focus should be on learning more about her as a person.

Going somewhere too expensive can also lead to uncomfortable moments. She might be worried about ordering something too expensive.

After all, there are some girls who feel bad when a mutually agreed-upon date is paid for entirely by the guy. They feel even worse when it’s somewhere super expensive.

As far as first dates, most girls prefer something low investment with more of a casual feel. Remember, the reason you two are there is to figure out if you two like each other.

Don’t say, “My mom would really love you.” It’s not cute. In fact, it’s almost creepy.

Sure, there may be a strong connection between you two, but it’s the first date, man. You barely know her and she barely knows you.

Avoid making future plans way in advance. If you want to hang out next week, you can talk about it. But don’t say, “Hey, in three months, let’s go to the Bahamas for a two-week cruise.”

Here’s a key lesson from this article: You don’t want there to be a large gap between how much you’re invested in her and how much she’s invested in you.

If she does happen to say, “Will your mom like me?” then that signals that you can say, “My mom would really love you.”

You’d be surprised how many guys go into a date without even knowing which restaurant he’s going to take the girl to. Don’t be that guy.

In fact, you should completely plan out the logistics of the date.

For example, you should probably have two or three locations you can take your date to that are close to each other.

You should plan whether you’re going to pick her up or if you guys will meet up at the location. Have reservations ready ahead of time if you’re going to a popular restaurant.

Furthermore, if your goal is to take the girl back to your place on the first date, your final location would ideally include drinks and be as close as possible to your home.

Will Legend is a blogger at DecodeHer.com and a dating columnist at Amped Asia. Need more food for thought on first dates? If so, click here to hear about a woman’s perspective on first dates.