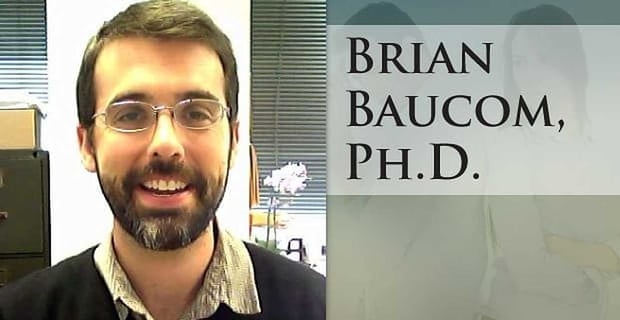 TL;DR: Having studied conflict in relationships for more than 15 years, Dr. Brian Baucom, an assistant professor of clinical psychology at the University of Utah, is easily the go-to expert on the subject.

Couples fight – that’s a given. But how and why does conflict happen, and how do our behaviors during those conflicts positively and negatively impact our individual well-being and the overall health of our relationships?

In his third year teaching clinical psychology at the University of Utah, Dr. Brian Baucom is dedicated to better understanding and informing others about these romantic inner workings.

The positive and negative side of conflict

He examines how conflict happens in particular ways, what happens when conflict goes well or poorly, how conflict affects a relationship in the short term and long term and how conflict is a potential vehicle for intimacy.

According to Baucom, the positive aspect of conflict is that it’s a process of reorganization. One person in the relationship is communicating with their partner that they are having an issue and would like to work out a solution together.

This type of open communication could create conflict, but it’s a type of conflict that implies change and has the potential to bring couples closer together if both partners are willing to be empathetic and understanding of each other’s needs.

When conflict doesn’t go well, it tends to be the flip side of that coin.

“In some form or fashion, there is a bit of a resistance to considering change. There’s typically a lot of invalidation or blame,” he said. “A lot of how we understand those less adaptive or maladaptive ways of dealing with conflict to take hold is through a process called coercion, which is what happens when one partner uses emotional pressure to get the other to agree to make some kind of a change.”

“The idea is that coercion results in a cycle where we respond to our partners in ways that make things better in the short term, but in doing so, it makes them more problematic in the long term,” he continued. “For example, if one partner nags the other and the other partner does what he or she is nagged to do, that process makes it more likely that nagging will happen again in the future because the nagging partner got what he or she wanted and the partner being nagged was able to end the nagging, at least for the time being.”

The role therapy plays in conflict

Part of Baucom’s research that has gained significant attention focuses on the factors related to couples doing well or less well when they receive different kinds of therapy.

What is most compelling about this work is Baucom and his colleagues found there are two different ways of interacting during conflict that can produce positive and negative outcomes for couples.

“What we found is that folks who are somewhat unhappy with their spouse… then that’s the effect that you find, so when they’re less aroused or distressed during conversation, that’s associated with greater likelihood of a good outcome,” he said.

“What we found for really highly distressed couples is actually that there’s a flip-flop such that if you’re not aroused, that’s associated with a negative outcome,” he continued.

Taking his research to the next level

Baucom’s next research task is to take advantage of developments that have been spurred on by the Affordable Care Act (ACA) or Obamacare.

When Obamacare passed, there was a big focus on new sensing and monitoring devices that will help doctors better manage chronic disease when patients are away from the hospital.

Where Baucom and his colleagues come into play is they can now use these devices, with approval from doctors and patients, to monitor the daily lives of couples in a more controlled setting – something they can’t get in a therapy session.

“We can now study you as you go through your day-to-day lives, and that gives us different insights into when and how conflict happens,” he said. “It gives us a very different way to ask some similar questions but that are more situated in how couples actually live their lives.”

All in all, Baucom believes his past, current and future work will continue to shed light on the variety of factors that influence conflicts in relationships.

“The way I hope that it can be helpful is by helping people understand why things happen the way they do in relationships,” he said.