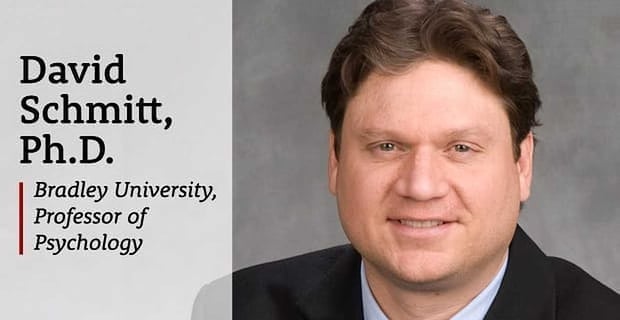 Dr. David Schmitt: Helping Us Understand Why We Choose Our Partners

TL;DR: Going on his 20th year at Bradley University, few psychologists have a resume more impressive than Dr. David Schmitt. Focusing on how and why people pursue their romantic partners, Schmitt is clearly the go-to authority on this topic.

What makes us choose one person over another? Is it hormones? Is it instinct? Is it society?

No one can answer these questions better than Dr. David Schmitt, a personality psychologist at Bradley University.

With concentrations in long-term partner selection and short-term sexual partner selection, Schmitt’s main goal is to determine how cross-cultural factors influence these choices and to encourage psychologists to consider this perspective when conducting their own research.

“In particular, I am interested in how culture affects the degree to which men and women differ in their romantic behaviors and how understanding these cultural factors might help improve sexual health and well-being,” he said. “Improving scientific knowledge about romantic relationships can help us alleviate social problems and health issues related to sexuality, including sexual risk-taking, infidelity, intimate partner violence and sexual aggression.”

Schmitt was kind enough to share with me several highlights of his career and how his work is breaking new ground in the industry.

Cited in more than five dozen publications, it’s difficult to say which of Schmitt’s innovative papers stands out the most.

However, if I had to choose, it would be a combination of his gender difference studies.

As part of the International Sexuality Description Project, an international network of scholars Schmitt assembled in 2000, several of Schmitt’s cross-cultural studies, which consist of almost 18,000 participants, found gender differences are more prominent in egalitarian sociopolitical cultures and less so in patriarchal cultures.

“So, for example, sex differences in romantic attachment styles are largest in Scandinavian cultures and smallest in more patriarchal cultures (i.e., in Africa and Southeast Asia),” he said.

Not only did Schmitt found the ISDP, but he also organized numerous sexuality and personality surveys, which have been translated into 30 languages and administered to college student and community samples from 56 countries.

“The large number of cultures in the ISDP has enabled my research consortium to investigate the relationships among culture, gender and sexual outcomes, such as permissive sexual attitudes and behaviors, infidelity, mate poaching (that is, stealing another person’s partner), desires for sexual variety, variations of sexual orientation, romantic attachment styles and the psychology of romantic love,” he said.

Besides being a leader in research that is changing the field of cross-cultural psychology, Schmitt’s hard work is paying off in the form of some pretty impressive bragging rights.

He also was named a Caterpillar Professor of Psychology in 2008 and received the Samuel Rothberg Professional Excellence Award in 2006.

Schmitt has been called “the most highly cited scholar in the field of cross-cultural psychology.”

So how do you add to an already monumental career? By following up on your most influential research.

Schmitt is working on a second part to the ISDP study, which consists of more than 200 international collaborators evaluating college student and community samples from 58 countries and adding much-needed analysis to existing surveys, including:

“I am particularly interested in whether women’s power and status across cultures have mediating effects on links among gender, sexuality and health outcomes,” he said. “I plan to run additional ISDP studies approximately every 10 years to determine, among other things, whether decennial changes in sociopolitical gender equality, local sex ratios and indicators of ecological stress precede important shifts in sexual and health-related behavior.”

To learn more about Schmitt, visit www.bradley.edu. You also can check out his blog posts on Psychology Today, where he continues the discussion on sexuality.

Here’s a preview of what to expect:

“People’s sex lives differ in lots of fascinating ways — we differ in how fast we fall in love, how easily we stay faithful and how kinky we’re willing to get when satisfying our partner’s erotic desires. We differ in our ability to truly trust romantic partners, or feel empowered by vigorous sex, or comfortably have sex with strangers. We differ in whether we do these things primarily with men or women, or both (and for about 1 percent of us, with neither),” the article read. “These sorts of enduring differences in people’s sex lives are what I refer to as our ‘sexual personalities.'”

5 Ways GoodTherapy.org Will Find the Right Therapist for Your Love Life