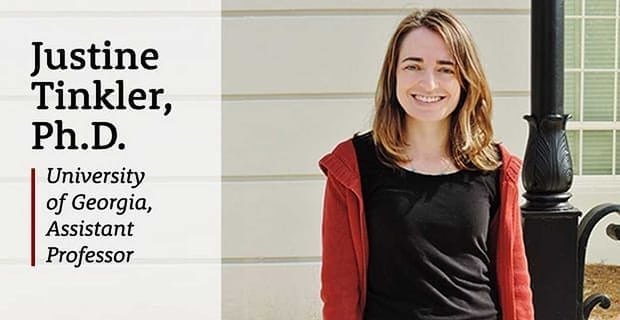 TL;DR: Dr. Justine Tinkler, of the University of Georgia, is shedding new light on the — sometimes inappropriate — ways in which men and women pursue each other in social settings.

It’s common for men and women to meet at bars and nightclubs, but how often do these interactions border on sexual harassment instead of friendly banter? Dr. Justine Tinkler says too often.

With her latest research, Tinkler, an assistant professor of sociology at the University of Georgia, examines just how often sexually aggressive acts occur in these settings and how the reactions of bystanders and those involved create and reinforce gender inequality.

“The number one goal of my research is to examine some of the cultural assumptions we make about men and women when it comes to heterosexual interaction,” she said.

And here’s how she’s accomplishing that goal:

Do we really know what sexual aggression is?

In a forthcoming study with collaborator Dr. Sarah Becker, of Louisiana State University, titled “Kind of Natural, Kind of Wrong: Young People’s Beliefs About the Morality, Legality and Normalcy of Sexual Aggression in Public Drinking Settings,” Tinkler and Becker conducted interviews with more than 200 men and women between the ages of 21 and 25.

With the responses from those interviews, they were able to better understand the conditions under which people would or would not tolerate behaviors such as unwanted sexual touching, kissing, groping, etc.

They started the process by asking the participants to describe an incident to which they’ve witnessed or experienced any kind of aggression in a public drinking setting.

Out of 270 incidents described, only nine involved any sort of unwanted sexual contact. Of those nine, six involved physically threatening behavior. Seems like a small amount, right?

Tinkler and Becker then asked the participants if they’ve ever personally experienced or witnessed unwanted sexual touching, groping or kissing in a bar or club, and 65 percent of men and women had an incident to describe.

What Tinkler and Becker were most curious about is what kept that 65 percent from describing those incidents during the first question, so they asked.

Dr. Justine Tinkler examines the micro-level processes that create and reinforce gender and race inequality in both formal and informal institutions of social control.

While they received a variety of responses, one of the most common themes Tinkler and Becker saw was participants asserting that unwanted sexual contact was not aggressive because it rarely resulted in physical harm, like male-on-male fist fights.

“This explanation wasn’t entirely convincing to us because there were actually a number of incidents that people described that didn’t cause physical harm that they nonetheless saw as aggression, so incidents like verbal threats or pouring a drink on someone were more likely to be called aggressive than unwanted groping,” Tinkler said.

Another common response was participants said this kind of behavior is so common of the bar scene that it didn’t cross their minds to share their own experiences.

“Neither men nor women thought it was a good thing, but nonetheless they see it in many ways as a consensual part of going to a bar,” Tinkler said. “It may be unwanted and nonconsensual in the sense that it really does happen without women’s consent, but men and women both framed it as something that you sort of get because you went and it’s your responsibility for being in that scene so it isn’t really fair to call it aggression.”

According to Tinkler, responses like these are very telling of how stereotypes in our culture naturalize and normalize this idea that “boys will be boys” and drinking too much alcohol makes this behavior inevitable.

“In many ways, because unwanted sexual attention is so common in bars, there really are certain non-consensual forms of sexual contact that are not perceived as deviant but are seen as normal in ways that men are taught in our culture to pursue the affections of women,” she said.

The main thing Tinkler wants to accomplish with this research is to encourage people to stand up to these inappropriate behaviors, whether the act is happening to themselves, friends or strangers.

“I would hope that people would problematize this idea that men are inevitably aggressive and the ideal ways that men and women should interact should be ways in which men dominate women’s bodies in their pursuit of them,” she said. “I would hope that by making more visible the extent to which this happens and the extent to which people report not liking it, it may make people less tolerant of it in bars and clubs.”

But Tinkler’s not stopping there.

One study she’s working on will examine the ways in which race plays a role during these interactions, while another study will examine how different sexual harassment training courses can have an effect on society that doesn’t invite backlash against those who come forward.

To learn more about Dr. Justine Tinkler and her work, visit uga.edu.