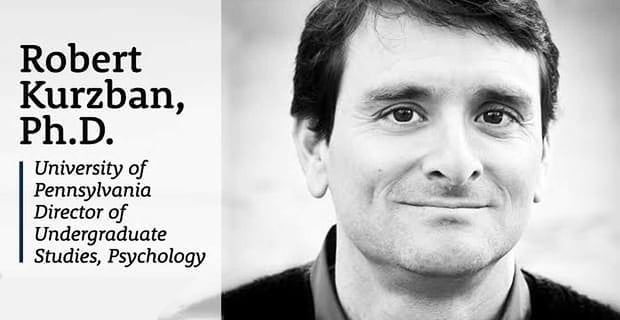 TL;DR: As the Director of Undergraduate Studies at the University of Pennsylvania’s Psychology Department, Dr. Robert Kurzban is the go-to expert – literally! With concentrations in evolutionary and social and cultural psychology, he also is a double threat in the field.

Dr. Robert Kurzban may be in his 12th year at the University of Pennsylvania, but his love of evolutionary psychology began many years ago when he was an undergraduate studying biology at Cornell University.

Kurzban was inspired by the growing field of scholars who started applying Darwinian ideas to human social behaviors, and he wanted in on the action.

“It was a very exciting time because up until that moment, in the ’70s and ’80s, people had been seen more or less as unique and apart from the biological world, but the unification of human social behavior with Darwinian psychology or Darwinian evolution was very exciting because it held the promise of illuminating human behavior with the same theories that have been so useful in understanding non-human behavior,” he said.

We spoke with Kurzban to better understand where this passion comes from and how he uses it in his work today.

His desire to know more

As an evolutionary psychologist, Kurzban studies what he calls “the nature of evolved cognitive adaptations for social life when it comes to mate choice.”

In the context of dating, Kurzban focuses on how humans have preferences and emotions that guide them toward adaptive choices, choices that would have led to reproductive success in the human past.

“These are basically the things in your head that do their job,” he said. “The visual system is good at telling you what’s out there, the language system allows you to communicate and the social systems allow you to navigate the social world, build friendship structures, attract mates and so on.”

“Before evolutionary psychology came around, some of these building blocks were missing. This is an area that has been very productive in terms of value that the evolutionary approach has added,” he continued. “You really understand what’s going on in human mating psychology because we’ve been applying this idea, this evolutionary lens to human social behavior.”

Setting the record straight with his work

Having published more than 100 papers and been cited more than 6,000 times, it’s hard to say which part of Kurzban’s extensive work history is the most influential, but his research about speeding dating is a great place to start.

Across two studies, Kurzban looked into what motivates people to choose one person over another in the context of speed dating.

With the help of commercial speed dating firm HurryDate, Kurzban and his colleagues studied data from more than 10,000 singles in their 20s, 30s and 40s who participated in speed dating events across the United States.

One publication focused on if preferences people make in their dating profiles match who they choose at speed dating events, while the other focused on date choices made during three-minute speed dating interactions.

“The nice thing about the speed dating studies is we were able to measure something which, in other kinds of contexts, was difficult to measure,” he said.

While his past work has made a significant impact on the industry, his current work, as well as his new book, already looks like it’s going to shake things up a bit, too, including research that contradicts past research that suggests men often overestimate women’s romantic interests.

“My hope is that this more recent material starts to dispel this notion that men are unwitting fools when it comes to estimating women’s interest,” he said. “I think the original work didn’t show what people definitively took it to show, and I think it’s important to get the record straight by doing additional work.”

No matter what he’s working on, Kurzban said discovery will always be his main goal, as well as setting the record straight when it comes to confronting “mistakes in literature.”

“There has been historically a resistance to the idea that evolution can be useful to understanding what humans are up to,” he said. “I think it’s just important to emphasize one of the most important productuve areas of psychology in terms of the value of evolution has been in the domain of mating.”

Dr. David Schmitt: Helping Us Understand Why We Choose Our Partners