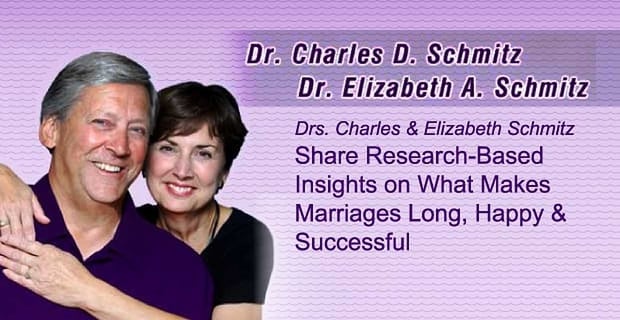 The Short Version:  Drs. Charles and Elizabeth Schmitz started a research project on love out of sheer curiosity, but they soon found themselves immersed in data and excited to share their findings with the world. For the last 37 years, Charles and Elizabeth have spoken with thousands of married couples and identified the seven pervasive characteristics of successful marriages. These internationally recognized marriage experts have sought to use hard data to explain why some couples remain happily married for decades while others grow apart. After decades of thorough research and firsthand experience, Charles and Elizabeth believe they can help people of all walks of life improve and strengthen their relationships. Together the couple has written over 1,200 informative articles on love and marriage. What’s more, Charles and Elizabeth reveal hundreds of simple secrets to lasting marriages in their upcoming book, “In Marriage Simple Things Matter.”

In 2010, Drs. Charles and Elizabeth Schmitz appeared on a WGN TV news segment about what makes marriage last. They had spent years interviewing thousands of married couples across the globe, and they’d been married for decades themselves, so they could speak with authority about love and relationships.

A panel of journalists asked the couple to describe their philosophy of relationship building, and the marriage experts outlined the principal components of love — things like respect, communication, and dedication — and explained that no relationship is ever perfect.

Then one of the reporters quipped, “Do you guys fight?”

Drs. Charles and Elizabeth Schmitz appeared on WGN in Chicago to share tips on how to make a relationship go the distance.

The pair looked at each and smiled. Of course they do! Never fighting isn’t a realistic standard for a relationship — and even happy couples are bound to have disagreements from time to time. What makes successful marriages stand out isn’t an absence of fighting but an abundance of understanding, compassion, and commitment to carry them through the fights.

Charles and Elizabeth both received their doctorate degrees from the University of Missouri-Columbia, and then Charles spent four decades as a university professor. In 1981, he and his wife embarked on an extensive research project to uncover the truth behind prosperous marriages. They spoke with thousands of married couples who had spent 30 to 77 years together and gained insights from every interview.

Altogether, Charles and Elizabeth have published over 1,200 articles (including 71 scholarly articles published in professional journals), given over 930 public speeches and presentations, written 172 research reports, and co-authored 17 books and monographs. They have interviewed married couples on all seven continents. And, throughout it all, they never lost sight of their love for one another.

“We have a lot of fun. Every day is a whole new adventure with us, and that’s the way it’s always been,” Charles said. “There’s lots of excitement in our relationship. We’re always going places, doing things.”

You need only look at the walls of their foyer to see the extent of their travels. In the course of interviewing couples from all walks of life, Charles and Elizabeth have gone on safari in Africa, watched penguins in Antarctica, visited Stonehenge, and met countless remarkable individuals who have spent a lifetime learning how to make a marriage work.

Well-Educated Marriage Experts Who Have Been Together 52+ Years

After graduating at the top of his class in high school, Charles Schmitz attended the University of Missouri-Columbia in the 1960s. One night, he was waiting for his buddies outside a residence hall when Elizabeth walked by and caught his eye. She was tall and lovely. He saw her again and again until he finally worked up the courage to ask her out.

Drs. Charles and Elizabeth Schmitz were college sweethearts and have stayed together 50+ years.

She said no. She was dating someone else. Charles felt heartbroken, but his friends encouraged him to try again. A few weeks later, he invited Elizabeth to come to a party at his apartment. She agreed, and they ended up sitting next to each other on a couch locked in conversation.

Elizabeth talked about what it was like growing up in a big city in Southern California where she went to high school with members of the Beach Boys. She was a champion swimmer full of wonderful stories and experiences. Meanwhile, Charles was raised in a Central Missouri town with a population of 621 people. Yet, the more they talked, the more they realized how much they had in common. They not only rooted for the same baseball team (the St. Louis Cardinals), they also shared similarities on a deeper level.

“We should have been so different but we were so much alike. Heck, we were peas in a pod,” Charles said. “I’m a small-town Missouri guy who married a California surfer girl,” Charles said, “and lived happily ever after.”

Charles and Elizabeth have been married for 52 years, and they have traveled the world inspiring couples to build relationships that last. “These things happen to people. You meet and feel that attraction,” Charles said, “but you have to act on it. Fortunately, we both acted right.”

Interviewing Thousands of Couples Around the World

While working as a professor at the University of Missouri, Charles found himself presented with the opportunity to run a workshop for couples. A doctoral student had asked him if he’d like to run a marriage counseling session for local farmers and their significant others. Charles thought that sounded like fun, so he and his wife traveled to Jefferson City to teach participants how to foster communication, trust, and intimacy.

Many of the participants were taken with Elizabeth, who offered great nuggets of wisdom. After the workshop was over, Charles and Elizabeth both felt they were onto something incredible, so they wrote about the experience and started doing research into love and marriage.

Charles and Elizabeth conducted 30-minute interviews with couples and pinpointed the determining factors of successful marriages.

Charles and Elizabeth started with a simple research question: Are long marriages necessarily happy marriages? And, if not, what defines a successful marriage? Basically, the couple wanted to gather as much information as they could on the subject of love.

They talked to couples across cultures and continents, studying which aspects of relationships led to longevity and happiness. To date, Charles and Elizabeth have interviewed couples in 55 countries. These couples vary in age but all boast decades of marriage. The researchers spend about half an hour asking them personal questions of their relationship and documenting their responses. Over time, Charles and Elizabeth began to see a pattern emerge, and they identified seven qualities that they believe define a happy, successful, and long marriage.

“The couples we’ve met and interviewed are absolutely amazing,” Elizabeth said. “They’ve given this wonderful insight to us, and we give it to readers.”

Charles and Elizabeth have spoken to thousands of people of all faiths, ethnicities, and orientations, but they believe the fundamentals of happy relationships are consistent no matter who you are or where you live.

“The reason we’ve been doing this for 37 years is because we get such amazing feedback from people,” she said. “Our readership spans the globe, and it feels so good to know that people out there feel comfortable reading information on our website.”

You can read about their takeaways in their award-winning books, or you can peruse the love and marriage articles on their website. SimpleThingsMatter.com is a free resource for couples hoping to better understand what it means to fall in love and what it takes to sustain that love for decades to come.

Available June 15, 2018, “In Marriage Simple Things Matter” is Charles and Elizabeth’s latest book, which has been touted as the encyclopedia of love. The authors have set down their exhaustive knowledge on the nature of relationships in clear and simple terms. They outline practical relationship tips based on a lifetime of interviews and research gathering.

“In Marriage Simple Things Matter” outlines everyday actions that can strengthen a relationship.

“It’s the culmination of all our years of research,” said Elizabeth. “It answers all the questions people in love ask at some time or another: What is love? What are the benefits of marriage? What makes love last a lifetime?”

Readers can use this book as a guide to help them develop and enhance their long-term relationships. “In Marriage Simple Things Matter” will be available as a hardcover book and ebook.

In their careers, Charles and Elizabeth have written five books about marriage, but this latest one is something they’re particularly proud of because it reflects over 40 years of work. They hope to make vital relationship knowledge more easily accessible and digestible to couples around the world.

Charles laughed as he said, “You know what we did for our 52nd wedding anniversary? We wrote a new book! About marriage!”

Many people don’t know how to cultivate a successful marriage — but, for Drs. Charles and Elizabeth Schmitz, it’s simple. Happy marriages are built on everyday kindnesses, not infrequent grand gestures. The couple has spent their careers seeking the truth behind the mysteries of love and condensing their findings into essential advice that’s easy for couples to understand and apply to their relationships.

These acclaimed researchers want to help couples build successful marriages, and they’re currently developing new ways to reach out to people and share their research. For instance, Charles and Elizabeth said they are head of the advisory board of experts planning to roll out an online counseling program to provide resources for anyone searching the web for relationship help.

“We really love what we do,” Charles told us. “There’s so much to learn, so much to share, and we just want to make it accessible to people out there.”

From the beginning, Charles and Elizabeth have striven to reveal the inner workings of happy marriages. Now they offer clarity to anyone unsure how to cultivate a fulfilling and healthy relationship. “We’ve taken the research and information from real couples, from real people, and boiled it down to simple language that makes sense,” Elizabeth said. “We give useful, practical tips on how to have a relationship and make it flourish.”