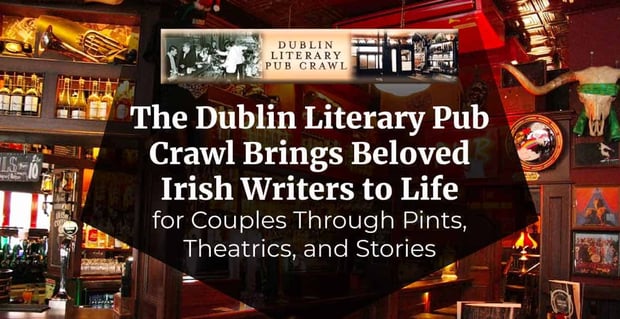 The Short Version: From Samuel Beckett to Oscar Wilde, many beloved Irish writers drew inspiration for their work over pints at pubs in Dublin. That history inspired Colm Quilligan and a masters graduate friend to start the Dublin Literary Pub Crawl to recapture their spirit. The pub crawl brings Irish literary icons — and the pubs they loved — to life through an informative and intimate tour setting. Couples who are fans of books, beer, or both can attend the Dublin Literary Pub Crawl to hear fascinating details about the lives of their favorite writers.

The Dublin Literary Pub Crawl has been bringing strangers, friends, couples, and families together for the past 30 years. When people sign up to take the tour, they can expect plenty of enthralling stories, visits to unique pubs, and tidbits about their favorite Irish authors.

“We always start at the Duke Pub, named after the Duke of Grafton,” said Dublin Literary Pub Crawl Owner Colm Quilligan. “And the pub has played host to a lot of modern writers, including Anne Enright who wrote ‘The Gathering’ and John Boyne who wrote ‘The Boy in the Striped Pajamas.’”

From there, the group makes its way to other notable drinking establishments like McDaids, the Palace Bar, the Select Bar, and Doheny & Nesbitt. Throughout the night, tour guides regale participants with the stories of many world-famous Irish writers, including James Joyce, Samuel Beckett, and Oscar Wilde.

But the tour doesn’t just stop at bars. One of its most memorable stops is Trinity College, the 16th-century institution where many of the country’s most notable writers got their start.

“At Trinity, we talk about Oscar Wilde and modern writers like Eavan Boland, who was a student there when it was a Protestant institution,” Colm told us.

For the drinkers with the best memories, the Pub Crawl offers an interactive quiz throughout the night, with the winner taking home a unique prize.

Its mix of salacious tidbits, literary history, and tasty Irish brews has drawn curious and fun-loving couples for decades.

Attracting Literature-Loving People From Around the World

The Dublin Literary Pub Crawl has been attracting guests from around the world for three decades. By Colm’s estimation, more than 600,000 people have experienced the tour.

So many people have had the chance to enjoy the tour because it runs every night of the week. During the summer, the peak of Ireland’s tourist season, 20,000 people typically take the two-and-a-half-hour tour.

Colm said that couples enjoy the tour’s liveliness and the face-to-face environment that no history textbook could provide. Visiting historic establishments and learning about the notable events that happened within their walls can entice even those couples who aren’t particularly passionate about prose.

Tour attendees aren’t all Irish literature devotees, either, as the crawl attracts anyone interested in lively anecdotes and Irish history.

“People are shy at the word ‘literary,’ but the tour’s not heavy in any sense of the word,” Colm said.

Tours always start at The Duke Pub in Dublin, which was named after the Duke of Grafton.

Throughout its history, the pub crawl has drawn all types of people, including couples, families, newlyweds, and even solo travelers. Colm shared the story of a father and son who took the tour together. The father shared with Colm the unfortunate circumstances of their trip to Dublin and why they decided to sign up for the tour.

“He told me that they were on a special trip to the pub crawl because the son’s twin had died in a tragic accident. They brought the brother’s ashes on the tour, and the son was carrying a backpack with them in it,” Colm said.

Dublin is a unique intersection of both pub and literary history. At one time, Dublin was home to more than 3,000 bars, meaning that the city has seen its share of lively times. But one of the most widely recognized types of pubs in Dublin is the so-called “literary pub.” These are the establishments where writers formed alliances and aired grievances, and they moved from pub to pub to establish new spots. Certainly, Dublin’s literary pubs were one of a kind.

It was this culture that inspired the Dublin Literary Pub Crawl in 1988. The tour was started by a group of academics who enjoyed taking guests around to bars and sharing the stories of the writers who frequented them.

But it wasn’t until Colm and a masters graduate friend started getting involved that the tour really developed a life of its own. That’s because they don’t just tell the stories of these literary personalities, they act them out.

The Irish Times gives couples just a little taste of what they can expect on Colm’s tour:

“Colm Quilligan, our guide, kicks off with a song — Waxies’ Dargle, with cheerful lines such as ‘When food is scarce and you see the hearse / You’ll know you’ve died of hunger’ — then takes us from the Duke pub through the cobbled square of Trinity College and into several pubs in a nearby maze of narrow streets.”

At each stop, tour leaders entertain attendees with stories, reenactments, songs and, of course, refreshments.

As they travel to the favorite drinking establishments of Irish writers, pub crawl participants from around the world often start to feel a sense of camaraderie. Some of that sentimental feeling comes from working together to answer trivia questions. For example, in two of the pubs, participants are tasked with finding the answers to a pair of quiz questions hidden inside.

Plenty of couples have found love on the pub crawl, too. In fact, Colm met his wife while he was giving a tour, and only by a bit of serendipity was she able to participate.

“She and her friend expected there to be extra space, but we were booked completely,” he said.

At the last minute, though, a pair of guests gave up their two tickets, which Colm then passed on to his future wife and her friend. The rest, as they say, is history.

“After the tour, people sometimes stay at the last pub until 2 a.m. enjoying each other’s company. People come together when the conditions are right.” — Colm Quilligan, Owner of the Dublin Literary Pub Crawl

Colm shared another story of a couple who returned after meeting each other on the tour more a decade ago.

“Last year, a guy told me he’d met his wife on our tour 12 years ago,” Colm said. “He just sat down beside this woman, started talking to her, and eventually they got married.”

It’s that sense of camaraderie and closeness that still motivates Colm after all these years. He’s proud that his tour has created connections in a world that can sometimes feel isolating.

“So many of us are isolated, both age-wise and socially. After the tour, people sometimes stay at the last pub until 2 a.m. enjoying each other’s company. People come together when the conditions are right,” Colm said.