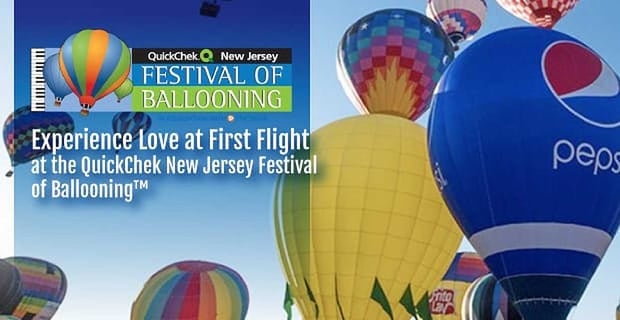 The Short Version: The QuickChek New Jersey Festival of Ballooning is more than just the largest summertime hot air balloon and music festival in North America. It’s also one of the most romantic events on which to take a date. The festival features live music, twice-daily mass ascensions of balloons, a 5K race, amusement rides, and plenty of ways to enjoy each other’s company. The Balloon Festival is held in late July and has been known to bring people together — often for a lifetime. More than a dozen engagements take place each year in balloons floating freely over the crowds.

It all began when multimillionaire adventurer Malcolm Forbes, newspaper publisher Tom Curley, and promoter Bill Lewis were among a small group of friends who brought their balloons for a weekend of fun and flight to the Union 76 truck stop on Route 78 in Bloomsbury, New Jersey, in 1983. Today, the QuickChek New Jersey Festival of Ballooning is the largest summertime hot air balloon and music festival in North America.

“Since then, I’ve met about 2,000 of those 100 people who claim to have been there that first year,” Howard Freeman, Executive Producer of the festival, said with a laugh.

Today the annual event takes place in late July at Solberg Airport in Readington in the scenic Hunterdon County countryside, where upward of 175,000 people are expected to watch 100 hot air balloons take to the air twice each day (in the early morning and again just ahead of sunset). The festival has become one of the most romantic events for couples. Each year, more than a dozen couples get engaged mid-flight in a hot air balloon far above the crowd.

If the Around the World in 80 Days vibe isn’t enough to put a smile on your face, there’s plenty of live music, a 5K race, food, rides, and photo opportunities to make for a memorable trip.

While the joy of watching the balloons ascend twice each day — weather and wind permitting, of course — comes with the price of admission, about 1,500 people also opt to schedule a private hot air balloon ride during the festival.

“What a great date opportunity to go up in a balloon,” Howard said. “You have an hour together; you’re floating in the sky. It’s the most fun you can have standing up!”

Beyond the incredible view you can enjoy from high up in a hot air balloon, the ride is very different from, say, a helicopter or a private plane. For one, there’s no steering wheel. The balloon relies on hot air, heated by propane, to rise. Where it floats depends on the wind.

Couples can go up in a hot air balloon at the festival — tethered or untethered.

Of course, some people prefer to start with a little more structure and opt for a tethered ride. These balloons are attached to the ground but still rise about 50 feet in the air; the 15-minute ride is just $20, while the longer Up, Up and Away trip costs $250.

It’s no surprise that so many couples get engaged in hot air balloon rides at the festival each year. One year, Howard recalls, a man got down on one knee and pulled out a ring for his beloved. As she was saying yes, he dropped the ring over the side of the basket and watched it free fall into the treetops. As his new fiancée’s eyes widened in horror, the man smiled — it was a fake ring. He pulled the real ring from his pocket and put it on her finger.

Dance Together to Live Music

If your perfect date isn’t complete without a little dancing, the Festival of Ballooning has concerts scheduled each night with popular acts varied enough to appeal to any musical taste. When the doors open on Friday for the 2018 version of the festival, young families will be treated to a performance by children’s music star Laurie Berkner. The opening evening’s theme is the same as it has been for years — Balloons, Tunes and Booms.

In addition to ballooning, festival attendees can enjoy concerts.

After the hot air balloons ascend, Andy Grammer takes the stage to perform his music — belting out hits such as “Honey, I’m Good.” After his set, organizers have planned a fireworks display, which is a perfect way to inspire closeness.

On Saturday, the festival features a performance by the band Lifehouse, and Creedence Clearwater Revisited hits the stage Sunday delighting classic rock fans.

“New Jersey is becoming more diverse, so this year we’re also partnering with Univision for a Hispanic music concert,” Howard added. Details will appear on the website when they are made available.

Stay Active By Running in the Balloons 5K

If you and your significant other have always dreamed of running with the bulls in Spain, but are looking for something a little safer, try the Running With The Balloons 5K.

“No runner has ever been gored by a balloon — unlike in Pamplona,” Howard said of the race, which takes place on Sunday.

About 1,000 runners are expected to participate in the festival’s race.

The race begins in an unusual and fun way. Instead of shooting a starting gun, organizers use a human cannonball to signal the start of the race. Dave “The Bullet” Smith set the world record of 193 feet for the longest and highest human cannonball flight. He’ll be shot out of a cannon into a net as the runners leave their marks.

As the balloons rise into the morning sky, an estimated 1,000 runners are expected to participate in the race. Need some motivation to train together? The fastest male and the fastest female runner each receive a free hot air balloon ride as a prize.

Go VIP to Surprise That Special Someone

General admission tickets for the festival start at just $24 for adults and they include lawn seating for the concerts.

But buying a VIP ticket is a fun surprise for your date, and there are many options to choose from. A VIP ticket for a concert gets you great seats and an up-close view of the performance. A VIP ticket for the Sunrise Balloon Breakfast allows you to enjoy a hot buffet and a “Balloon-i” cocktail together while watching balloons lift up into the crisp morning skies.

Of course, if you get hungry at any point in the day, you can pop over to the 3,000-square-foot QuickChek store, which is constructed on the festival grounds just for the weekend. There will also be plenty of food vendors, and Howard highly recommends a funnel cake to share.

Arrive in Style for a Romantic Weekend of Wonder

While it would cost about $25,000 to buy a hot air balloon and arrive at the festival like a pro, you have less expensive transportation options for your special weekend.

The Balloon Festival started in 1983 and is now the largest event of its kind in North America.

Solberg Airport is located 42 miles from New York and 54 miles from Philadelphia, so there are many inexpensive flight options to consider — as well as many hotels available around the area. If you plan to rent an RV, be sure to also reserve a spot at one of the many peaceful campgrounds near the event.

On-site parking costs $10, or you can park at no charge at the Raritan Valley Community College and catch a free express shuttle bus to the festival.

And once you arrive in style, all you’ll need to do is hold hands, look up in the sky, and decide which of the specially shaped balloons — such as Elvis, Tweety Bird, and many more — is your favorite.

“It’s rewarding when people come, meet there, come back and get engaged. Then they come back every year for their anniversary,” Howard said. “And it’s really cool when we see their kids come.”