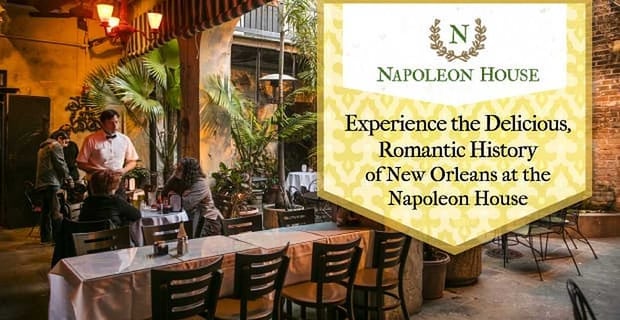 Experience the Delicious, Romantic History of New Orleans at the Napoleon House

The Short Version: Located in the heart of the French Quarter, the Napoleon House Restaurant and Bar mixes the rich history of New Orleans with an amazing menu featuring popular muffulettas and Pimm’s Cup cocktails. In fact, the Napoleon House sells more Pimm’s Cups than any other location in the nation. Perfect dates in New Orleans often include lunch, dinner, or cocktails in the Napoleon House’s tucked-away courtyard or classically charming dining room, but you may not be alone. In addition to the other couples in the restaurant, you may feel the presence of the storied ghosts that visit the property, which dates back to the early 1800s.

Wandering around the romantic streets of the French Quarter in New Orleans can be as good as it gets for a getaway weekend for two. Even after visiting the Big Easy many times, I still get swept up in love each time I’m in this charming city.

The narrow, historic streets are painted with flowering vines draped over Parisian wrought-iron balconies, and quirky shops beckon with voodoo dolls, local artwork, and unique crafts. Jazz, blues, and funk music blast from what seems like every doorway on Frenchmen Street.

Weddings are especially wonderful in New Orleans. Two of my friends were married downtown and had a Second Line parade through the streets of the French Quarter. All of their guests were led by a brass band and twirled light blue handkerchiefs in the air in celebration of the nuptials. Needless to say, quite a few cocktails were enjoyed that evening.

At the heart of all this hospitality is a landmark of amazing food, signature cocktails, and ambiance just a stone’s throw from Jackson Square — the Napoleon House. The restaurant, located on the corner of Chartres and St. Louis streets, is set in the private home of Nicholas Girod, the first mayor of New Orleans. It’s classy, authentic, and makes more Pimm’s Cup cocktails than any other bar in the nation. It’s a cocktail that goes well with the restaurant’s popular muffulettas and relaxed Southern courtyard ambiance.

“It’s authentic Creole dining in one of the city’s most historic settings. The restaurant suspends you in time, and we wanted to keep it that way!” said Meaghan Donohoe Regan, Publicist for the Napoleon House.

As a result of the owners’ dedication to history, delectable food, and delicious cocktails, the Napoleon House is considered one of the best restaurants and bars in New Orleans by Condé Nast Traveler, Eater New Orleans, Forbes, Thrillist, and other food reviewers. Which means it’s a great place to take a date if you want to, as the French say, laissez les bon temps rouler (let the good times roll).

Must-Orders: The Muffuletta and a Pimm’s Cup

Locals and visitors make it a point to swing into the Napoleon House at least once during their time in the city, and savvy folks already know what they’re ordering: a muffuletta and a Pimm’s Cup.

Let’s start with what’s more important in New Orleans, a city where people take their cocktails very seriously. The Pimm’s Cup was first mixed by the Napoleon House bar in the late 1940s and is made only with Pimm’s No. 1, a gin-based liqueur, lemonade, 7 Up, and ice, garnished with a slice of cucumber. It’s the ultimate refreshment, especially during the sweltering heat of New Orleans’ summer months.

The Napoleon House serves more Pimm’s Cups each year than any establishment in the country.

A muffuletta is substantial enough to keep you going during the afternoon, or perhaps in the evening before a night out on the town. Second to the city’s hearty po-boy sandwiches, the muffuletta is its quintessential sandwich made with cured meats and cheese, slathered in olive salad spread on sesame-crusted Italian bread.

The sandwich is so popular here that the cooks make 50 gallons of that olive salad spread every week — and they only use a couple of tablespoons for each sandwich.

To shake things up, of course, you could order jambalaya, gumbo, grilled alligator sausage po-boys, or plenty of other Creole chow at the Napoleon House.

The Napoleon House provides the right atmosphere to attract everyone from local business owners to tourists, young couples, and families. The restaurant got its name when owner Nicholas offered it to Napoleon as a place of refuge when he was exiled from France in 1821, but the powerful and legendary statesman died before getting the chance to take him up on the offer.

As you enter, you can almost imagine Napoleon seated in the private courtyard, which is tucked away from the busy streets of the historic French Quarter, located not far from the Mississippi River. The restaurant is exactly where you want it to be when you’re ready for refreshment any time of day.

The Napoleon House courtyard is located just off the bustling streets of the French Quarter.

Like my friends who celebrated their wedding through the streets of New Orleans, hundreds of happy couples have tied the knot at the house. Recently updated private rooms — including the Rosa and Pietro Rooms — are available upstairs for private events, and some big dinners, cocktail parties, and reunions will rent out the entire restaurant. That usually means Pimm’s Cups for everyone.

“It’s important for us to maintain the history of the property, but refreshing the private party rooms gives people the chance to get married overlooking the French Quarter. They are really popular for that,” Meaghan said.

Everyone knows New Orleans has a colorful past — but some believe parts of that past are still around in the form of roaming spirits. Ghost tours are popular in the French Quarter, and groups always make a stop at the Napoleon House.

Many people have reported seeing a little old woman sweeping on the premises, while paranormal experts have come with testing equipment and identified two other ghosts as well.

While you’re eating one of the Napoleon House’s most popular dishes, the muffuletta, you and your date can share stories about the rumored ghosts who still live in the restaurant.

Supposedly, there’s a young lady who haunts the grounds and an old sailor who is drinking rum at the bar. Interestingly, in the 1800s, the upstairs attic was used as a barracks for sailors.

If you find yourself scared on your date at the Napoleon House, it’s a good excuse to get a little closer.

A Necessary Stop for Any New Orleans Visit

The Napoleon House, with its history, muffulettas, and Pimm’s Cups, makes the short list of the few places considered a must-see while in New Orleans. The 200-year-old building is, quite simply, a landmark watering hole.

It was previously owned by the Impastato family, who bought it in 1914 before selling it to Ralph Brennan more than a century later in 2015. The new owners went out of their way to keep the restaurant authentic and original, both in the fresh, delicious ingredients and classy ambiance. The brick-wall courtyard, with plants growing in corners, remains a secluded spot to enjoy lunch with someone special.