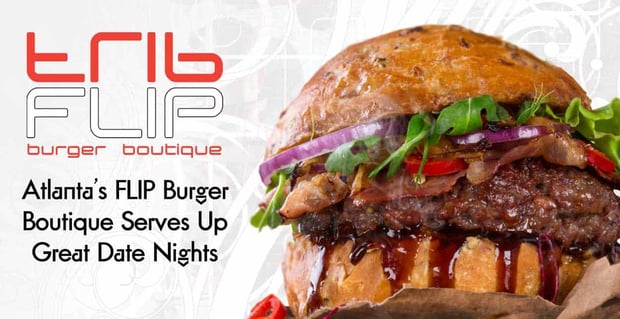 The Short Version: FLIP burger boutique serves up burgers, fries, and milkshakes with a side of innovation for singles, couples and families in Atlanta. The restaurant is credited with kicking off the gourmet hamburger trend more than a decade ago, and its gourmet chef regularly updates the restaurant’s menu with creative items. That dedication to delicious food has earned FLIP a devoted following, including those who enjoy elevating their burger experience on date nights, and FLIP plans to increase its footprint with more restaurants in the works.

Couples looking for an upscale burger and fries don’t have to search hard in Atlanta. In fact, they can eat at the restaurant that started the gourmet burger trend back in 2008: FLIP burger boutique.

A night out at FLIP offers a memorable experience, and the restaurant’s concept is centered on “flipping” the idea of a traditional burger joint. Patrons can feel that commitment in everything at FLIP, and it hits right when they walk in, as they see wooden tables and white booths both on the ground and on the ceiling.

“That’s what makes the concept cool; everything is a reflection of what you’re seeing,” said Joseph Hsiao, FLIP’s owner.

Then comes the menu. Certainly, the restaurant has been lauded for making offerings that look a lot like standard diner food: burgers, fries, and milkshakes. But there’s nothing standard about anything on FLIP’s menu.

The eatery serves up burgers made from black Angus-blend beef that’s seasoned and made into patties in house. Fries are cooked in tallow (rendered beef fat), seasoned, and served with smoky mayo. Milkshakes are made using liquid nitrogen — a quick-freezing solution — and served with sweet toppings like Krispy Kreme doughnuts or Cap’n Crunch cereal.

Though FLIP has unique menu options, it isn’t so sophisticated that you can’t visit in casual attire. The restaurant has an upbeat and eclectic atmosphere during the day, with popular ’90s music playing over the speakers. But, at night, FLIP dims the lights to create a more cozy, romantic atmosphere.

“It has a little club feel to it at night, but without the music overpowering the conversation,” Joseph said.

For its fun menu and intimate, but casual, atmosphere, FLIP burger boutique has earned our Editor’s Choice Award as a great place to venture with a date.

While sophisticated versions of food from diners or drive-ins may seem familiar today, it was a new concept in the early 2000s.

“We were the ones who started the whole gourmet burger concept 10 years ago,” Joseph said. “Now you have a lot of restaurants doing something similar to what we’re doing, but we were the first to serve more than what the burger chains were offering.”

Winner of “Top Chef: All-Stars” and former Atlanta resident Richard Blais started FLIP with the goal of creating a different kind of experience. It was perhaps Blais’s notoriety on the competition show and other food-themed TV programs that brought FLIP its early buzz. Though Richard eventually sold the restaurant to Joseph and moved to San Diego, the spirit the Top Chef alum brought to the eatery remains.

FLIP’s atmosphere is vibrant and romantic, and the decor offers some literal interpretations of its name.

“We have a creative touch behind us. Our executive chef comes up with a lot of different combinations. On the gastromolecular side, he comes up with different flavor profiles for the burgers and different foods we have,” Joseph tells us.

The menu is a balance of old favorites and new innovations. Quarterly, FLIP’s chef comes up with new menu items to keep regulars interested.

“We keep a couple of the core items, but we change out the other options,” Joseph said. “We try to be innovative and creative.”

FLIP’s regular customers are a diverse group of people. Couples looking for a nice dinner out frequent FLIP, and the restaurant attracts a younger, college-aged crowd from the universities surrounding its neighborhood. The eatery has been attracting more families who come to enjoy burgers with their kids.

“We reach everybody,” Joseph said.

The Menu Boasts Plenty of Flavors

FLIP has earned many accolades from national publications for its food during its decade in business. Travel + Leisure named the restaurant’s fries on its list of the best in America, and USA Today includes FLIP’s milkshake among the best in the country. Maxim noted that FLIP was one of the best places in the country for lunch.

For a perfect lunch, Joseph recommends ordering one of the restaurant’s most popular burgers, Oaxaca. It is a sweet and spicy delicacy that comes topped with avocado, pico de gallo, queso fresco, and cilantro-lime mayo.

Many diners order the restaurant’s memorable fries as a complement to the burger, though they have other options, as well. Sweet potato tots, served with burnt marshmallow foam, are another popular option. For those who want a healthier side, FLIP offers roasted cauliflower with pearl onions, capers, kalamata olives, feta, and olive oil.

Joseph recommends couples try the Oaxaca burger, which he calls a sweet and spicy delicacy.

Many couples can’t resist ending their meal with a milkshake — served with or without alcohol. The Nutella and toasted marshmallow offering is one of the restaurant’s best-known non-alcoholic versions. The goat cheese and cherry shake, made with vanilla ice cream and vodka, or the peach in the rye, with vanilla ice cream, mint syrup, peach, and rye, are some of the most popular boozy alternatives.

“A lot of dates will come and grab a milkshake, sit at the bar, and people watch,” Joseph said. “We have a patio with a great view, just off of Main Street if you like to see what’s going on.”

Foodies also enjoy watching their meals be prepared in the restaurant’s open kitchen. One aspect of the process that Joseph particularly recommends is watching the servers add nitrogen to the milkshakes because it freezes them instantly.

FLIP has retained its innovative reputation for more than 10 years and has attracted quite a following. The restaurant has hosted many celebrities and catered events at studios and on movie sets throughout Atlanta.

Joseph also told us about a surprising new trend the restaurant is seeing: reality TV shows that want to film at FLIP.

“We’ve had several reality TV shows filmed at our location over the last year,” he said. “And they were all dating shows.”

With that kind of buzz and notoriety, FLIP wants to expand from its current single location in Berkeley Park, Atlanta. Joseph and his brother Matthew plan first to grow the restaurant to other Atlanta locations, but they also have longer-term goals to nurture FLIP into a national chain.

“Right now, the original one we have is doing great and has a great following. We’re happy with what we have, but we’re looking for opportunities to expand, as well,” Joseph said.

But, even if FLIP does open new locations, it won’t resemble other burger eateries. The restaurant will continue to grind its meat rather than freezing its patties to be shipped out to multiple shops. The beef it uses will still be top-grade, and its fries will still be hand-cut in house. The milkshakes will continue to use a special blend made just for FLIP by a local, organic ice cream company.

After all, FLIP’s entire concept is about making burgers that use fresher products and taste better than the ones you get anywhere else.

“Our goal will always be to deliver a high-quality, fresh burger,” Joseph said.