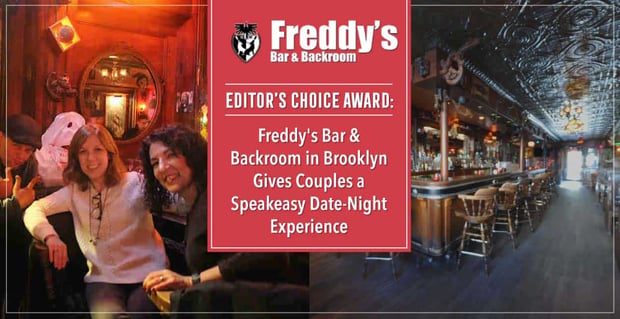 The Short Version: When the first iteration of Freddy’s Bar & Backroom opened in Brooklyn about 90 years ago, alcohol was illegal. Now, 87 years after Prohibition ended, the establishment still maintains connections to its speakeasy roots, and it’s become a fun destination for couples in New York. Freddy’s is a relaxed place with top-end bartenders, plenty of beers on tap, and a tasty food menu. That fun history and lively atmosphere make it a great date destination.

During Prohibition in the 1920s and early 1930s, if people wanted to buy a drink at the original iteration of Freddy’s Bar & Backroom, they had to be in the know. The former speakeasy, once a private club known as Henderson’s, sat in the middle of the Prospect Heights area of Brooklyn, but only served a select group.

People lucky enough to get a seat at the bar could belly up and buy a — then-illegal — cocktail next to police officers, factory workers, and even politicians. Locals often stored their house keys in a cigar box behind the bar, and regulars could have their checks cashed by the bartender.

When a police officer from the neighborhood purchased the bar in the mid-1970s, he changed its name to Freddy’s Bar & Backroom. In the mid-1990s, ownership changed hands again. Then, in 2010, the folks who patronized the bar for decades got some sad news. The bar would be torn down to make room for the Atlantic Yards development project, which would become the home of the NBA’s Brooklyn Nets.

But Freddy’s Bar & Backroom survived thanks to those who salvaged the entire interior of the bar and rebuilt it in the South Slope section of Brooklyn. Today, people can still experience that history — and they don’t need a special password.

“We have unique decorations that provide endless sources for conversations and discussions,” said Freddy’s Bar & Backroom Co-Owner Donald O’Finn. “We have been called endlessly interesting. I have always viewed the environment of Freddy’s as an interactive, living, and wildly artistic organism.”

Freddy’s Bar & Backroom is still considered a Brooklyn institution, and it’s a great place to bring that special someone for a cocktail to begin — or end — a great evening. With plenty of free live music, poetry, and film events, the bar always has something going on worth checking out.

The first thing most patrons notice when they enter the bar is often the gorgeous, red mahogany back bar with glowing bottles and large mirrors on display. Even the shiny chrome cash register dates back to the 1950s.

The bar is filled with the original mahogany tables with hand-carved graphite accents that date back decades. It also includes a frog tank mounted to the wall that displays a large albino African Water Frog.

“We have a small, sunken counter in wood, and a TV monitor behind the bar looping a yellow tabby cat lapping milk from a bowl 24/7, mimicking the consumption from the front side of the bar,” Donald said.

The bar has a lively atmosphere and is a great place to bring — or meet — a date.

Donald has been making those funky mash-up videos for decades — well before the genre of art even coined the term mash-up to describe it. He started experimenting with the art form on VHS back in 1981.

Freddy’s Bar & Backroom has a classic green awning, a tin-metal ceiling, and a generally relaxed vibe, which is partly why it’s consistently named one of the best bars in Park Slope — and Brooklyn in general. But most importantly, the bar has attentive bartenders who know how to pour a drink and care for customers. That kind of service isn’t always easy to come by, especially in New York City, but safety and comfort are important to the team at Freddy’s, Donald said.

“We do not suffer fools or drunks. That is very important to the function of a good bar,” he said. “Our staff is second to none. They are fast, friendly, and courteous.”

When the weather is lovely in Brooklyn, the backyard area at Freddy’s Bar & Backroom is a wonderful spot for couples to spend happy hour. And the backroom stage almost always has something going on. All of the live music, poetry readings, and film events held at the bar are free, so plan to arrive early to get a good seat. The bar’s entertainment calendar is eclectic. Patrons may hear blues, punk, or even traditional music from the Balkans.

“Usually on any given night, Freddy’s is still the best party in town, and I want it to stay that way,” Donald said. “It is not about the money. It is about the party.”

Frequent patrons range from their early 20s to mid-30s, although the bar welcomes anyone who wants to have a good time. It’s a pretty even mix of men and women, and customers can meet everyone from blue-collar professionals to local musicians and artists.

With its romantic private booths, Freddy’s Bar & Backroom is a great place to bring a date. But it’s also a good place to go alone. Plenty of couples have met over the decades while having a drink at the bar.

The staff, of course, has seen it all. Donald’s partners, Matt Kimmett and Matt Kuhn, are some of the best bartenders in the business, and many of the bar’s team members have been working at Freddy’s Bar & Backroom for years.

Donald said the team’s goal isn’t so much to put themselves in the spotlight — like other New York City bars often do with what he calls “celebrity bartenders.” Instead, he said the team wants to be perfect hosts and help patrons have a great time whenever they stop in.

Freddy’s Bar & Backroom: Classic Cocktails and Great Food are Always on the Menu

Freddy’s Bar & Backroom has been perfecting its cocktails since before Prohibition ended in 1933, and people don’t need to be secretive about enjoying any of its concoctions today.

Along with classic cocktails, like Negronis and Moscow Mules, customers can order from a wide selection of beers on tap. They also love the bar’s tasty food. The tater tots and pigs in a blanket are worth a try, as well as the Magic Mike, which is grilled shrimp with melted provolone, red onion, sliced avocado, and house salsa on a toasted ciabatta bun.

“It is just so damn good. That’s my personal choice,” Donald said. “Everyone seems to be very loyal to their particular favorite dish.”

The creative nature of the bar’s patrons is another part of what makes it so special, according to one frequent customer.

“I really value Freddy’s as a bar and venue that welcomes and facilitates quirky creative communities,” said Dylan.

Couples can watch an eclectic mix of free shows in the bar’s backroom.

It’s that focus on fun and customer service that Donald plans to continue for years to come.

“It is all that I wanted back when I got started when we were having trouble just making our rent and covering employee costs,” he said. “What I wanted, more than anything, was to be an effective instrument in the community. It was about more than alcohol. It was, and is, a community center, a fun place.”