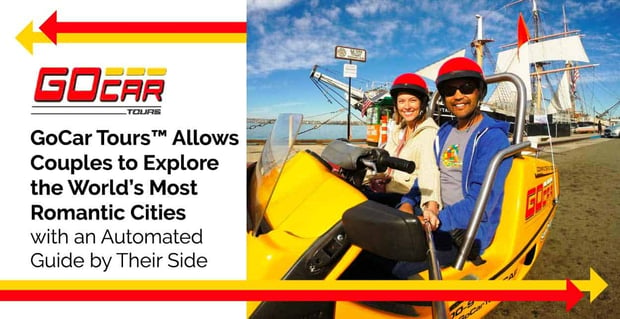 The Short Version: GoCar Tours allows traveling couples to see cities in a more intimate and fun way than on standard group tours or sightseeing buses. The company’s unique vehicles — similar to go-karts — come equipped with a GPS system that directs drivers to popular spots, provides information about notable locations, and even tells jokes. Couples can rent a GoCar for a quick tour at one of eight destinations around the world, or they can take one out for an entire day of exciting, guided sightseeing.

San Francisco is one of the most popular tourist destinations in the United States, and more than 15 million people check out the famous Golden Gate Bridge every year. But with so many visitors in the city, it can be a challenge to discover unique areas and attractions.

That was the problem Nathan Withrington set out to remedy when he founded GoCar Tours in 2004. The company allows tourists to rent small, GPS-enabled vehicles fitted with digital guides to give travelers the inside scoop on locations in the city.

“I came up with the idea of renting interesting vehicles, but I also wanted them to deliver location-based information using GPS. We wanted to provide details about where you are,” he told us.

Nathan consulted with a friend who worked in the tech industry who helped him design a technology that triggered an audio file to play when prompted by a GPS location device. For example, if someone drives a GoCar near the Golden Gate Bridge, they will automatically hear a unique story about the structure.

Nathan was the first to develop that type of technology, which caused quite a stir. His company was even featured in the San Francisco Chronicle and The New York Times.

“GoCar Tours took off from there. It was something that no one else had done before, and that made the company relevant overnight,” he said.

The company became so popular that it expanded well beyond San Francisco. Now, singles, couples, and families can rent a GoCar in cities throughout California, including San Diego and Monterey. The company also has locations in Spain (Barcelona and Madrid), Portugal (Lisbon and Porto), and France (Bordeaux).

“We started with eight cars and one location in San Francisco. Now, we’ve got locations all over the U.S. and Europe,” Nathan said.

GoCar Tours has become popular because the cars allow visitors to design their own tours. Tour buses limit tourists to certain stops, and, in some cities, those buses can’t go everywhere people may want to explore.

Couples may book seats on tour buses because they aren’t confident they can navigate new cities by themselves. That’s why GoCar vehicles come complete with a GPS app that provides directions, tells stories, and makes recommendations.

“The car cracks jokes, recommends restaurants, gives you directions, and tells you stories about the city,” Nathan said. “You’re exploring on your own, but it’s like having a local in the vehicle showing you where to go.”

This model allows couples to create custom itineraries, and even change things up on a whim. A person only needs a driver’s license and a credit card to rent a GoCar. After watching a five-minute safety briefing, the driver receives a car to take out.

If someone only wants to rent a GoCar for an hour, they can get out on the road for a short excursion. If they want to embark on a three-hour tour, the company offers ideas for the must-see attractions in that length of time. Tourists can extend their rental if they haven’t seen everything they wanted — as long as no one has booked the vehicle.

“You’re on your own schedule. It gives you autonomy and freedom to choose where you stop and lets you see things you’re not going to see on other tours,” said Nathan.

Couples Have the Freedom to Explore at Their Own Pace

GoCar Tours customers are a diverse group. Recently, the company looked at its renter demographics and discovered that the average renter age was 45. Though many of those customers were married couples with children, GoCars are very popular with daters of all ages.

“We were worried that the only customers we’d have would be younger,” Nathan said. “But we also get a lot of older people who rent and go out for the day.”

Couples enjoy GoCar Tours because of the intimacy and spirit of adventure it fosters. If a couple isn’t interested in seeing particular sights, they can skip them — something they wouldn’t be able to do on a scheduled tour or sightseeing bus.

Nathan also said GoCars are popular for dates because of the vehicles themselves.

“When you’re in a small car, you get to spend time close together, so it’s a great date experience for a couple,” he said.

GoCar Tours has made couples feel so romantic that they’ve even gotten engaged while renting a vehicle. Nathan said that more than a few people have popped the question on a tour.

“I think the Golden Gate Bridge, which is on the tour, is a pretty popular place for people to get engaged,” he says. “Not too long ago, a couple showed us a photo of their engagement there.”

One couple even took their fondness for GoCar Tours a step further, requesting that GoCars be part of their wedding. The bride, groom, and bridal party used GoCars to travel to and from the wedding venue.

Over its 15 years in business, GoCar Tours has remained a popular attraction for tourists seeking unique dates, but the company has plans to expand its offerings and develop new types of experiences.

In recent years, GoCar Tours has added electric scooters — including mopeds — for tourists to rent. These smaller vehicles offer access to even more areas of town visitors wouldn’t otherwise get to see, even in a GoCar.

“We’re trying to create a more interactive tour. For example, you could go to Chinatown and make your own fortune cookies, taste truffles, and then complete an activity at Fisherman’s Wharf,” he said.

“You’re exploring on your own, but it’s like having a local in the vehicle showing you where to go.” — GoCar Tours Founder Nathan Withrington

GoCar Tours also plans to add new electric cars that can take people across the Golden Gate Bridge onto the highway. Because of the nature of the GoCar, renters can only take them around the San Francisco streets right now. Though there’s plenty to see in the city, there are nearby excursions that GoCar Tours wants to suggest to tourists.

“When we get those new cars, you can go to Sausalito, Tiburon, and Eagle’s Nest. Those are popular places, and we know those cars will expand the market,” Nathan said.

As the company expands its technologies and vehicles, Nathan is still proud to offer tourists an adventurous way to explore new cities. But he reminds couples that if they want to ensure a memorable date, they should book early — especially on romantic occasions.

“If Valentine’s Day falls on a weekend, we’re always sold out,” he said with a laugh.