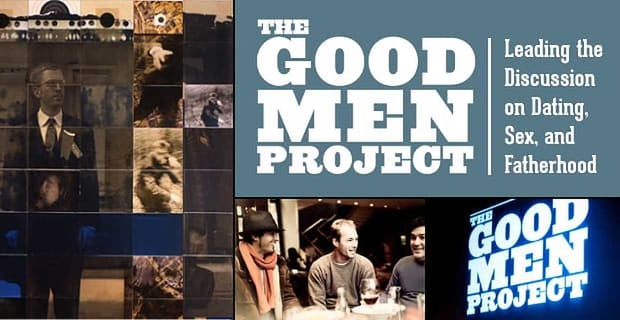 The Good Men Project: Leading the Discussion on How Men Handle Dating, Sex, and Fatherhood in the 21st Century

The Short Version: The Good Men Project is a blog on a mission, overthrowing stereotypes and getting at the truth of what it really means to be a man in today’s society. Addressing subjects related to dating, marriage, and fatherhood, The Good Men Project and its thousands of writers make a case for the diverse and fluctuating perspectives on manhood. The objective of this compendium of articles is to start a dialogue that challenges traditional ideas about masculinity. This team of men and women examine the nuanced roles that men can have — as well as the choices they can make to improve their relationships and lives.

Ferret Steinmetz has a daughter of dating age, but he’s not getting his shotgun ready, he’s not making threats to the boys she likes, and he’s not telling her what to do with her own body.

Instead, he wrote an impassioned article entitled “Dear Daughter: I Hope You Have Awesome Sex.” Countering common culture stereotypes, this dad says he wants his daughter to have the best things in life, and that means a healthy dose of good sex.

His perspective, on its face, may seem outlandish but when you read through his rationale it makes perfect sense.

Ferret Steinmetz wrote a heartfelt endorsement of his daughter’s sex life for The Good Men Project.

The job of a father isn’t to grandstand, bully, and discourage a natural part of young adulthood. This kind of forward-thinking is commonplace on The Good Men Project, a blog dedicated to countering harmful stereotypes about manhood and masculinity.

Turn to this wealth of musings if you’re wondering if a man should still pay for a first date? Or whether a happy wife really means a happy life?

The site tackles difficult societal questions with nuance and empathy rather than a dismissive archetype.

“Guys today are neither the mindless, sex-obsessed buffoons nor the stoic automatons our culture so often makes them out to be,” the site proclaims. This is a place for a new kind of man to explore what it means to be good: how he can grow as a person to be fairer, healthier, and happier.

Lisa Hickey, CEO of Good Men Media Inc, tells us about their mission to drive the conversation about what it means to be a good man in this day and age. From relationships to fatherhood, they deal with every aspect of a man’s roles.

With the tagline “The conversation that no one else is having,” The Good Men Project pioneers an ever-changing societal landscape. After a recent site redesign for a more modern, cleaner, mobile-friendly website, this team is more ready than ever to lead the way into the future.

The Good Men Project: How an Anthology Became a Movement

In 2009, tired of the rat race, Tom Matlack left his career as a venture capitalist to start a conversation about what it means to be a man in today’s world. He felt he had his finger on the pulse of an important topic that no one was discussing, so he went out to collect stories from men about their experiences dealing with societal pressures and stereotypes.

He began by asking men to describe defining moments in their lives. As he put together his anthology, he saw a pattern emerge: men wanted to talk about this idea of what it means to be a good man and how a modern man should act.

When Tom finished his anthology, he sent it out to about 50 publishers, and they all said the same thing: It’s a great idea, but there’s no audience for it because men don’t read books, and they certainly don’t read anthologies about manhood. However, he believed in his project so much that he self-published.

At that point, Lisa joined him to put together a social media campaign. As they marketed the book and built a platform for it, they saw it was a bigger topic that could be a bigger business. These men’s stories evolved into a film, a series of events, and finally a website.

“This idea of sparking a national conversation about what it means to be a good man in the 21st century,” Lisa says, “to me, that was just so profound — nobody was doing that. Nobody was even talking about it.”

Despite what some may have assumed, men were actually very eager to join this conversation and form a community of readers and writers. In this way, the Good Men Project began making headway on changing common perceptions of manhood.

Who Writes the Blog: Over 6,000 Diverse Contributors

The Good Men Project doesn’t keep a limited staff of writers but rather enjoys contributions from thousands of writers all over the world including Australia, Singapore, the United Kingdom, and the U.S.

“We have this dynamic group of people,” Lisa explains. “Over the six years since we started the website, we’ve had over 6,000 different contributors to the Good Men Project.”

While a majority of the site’s audience is English-speaking, but Lisa tells us that people from every country in the world visit the site in any given month.

Currently, about 1,000 active writers and 38 editors work together to churn out five to seven stories a day on the site. Google spreadsheets are a must for this extended team. The Good Men Project is proud of the international makeup of its contributors.

“Part of what we’re trying to do is showcase the multi-dimensionality of men,” she says, “so you don’t think that men fit into these really simple boxes because you can see the diversity of mankind, and the expression of masculinity is really so wide and varied.”

The team is passionate about their mission. About 70% of those who work on The Good Men Project are themselves men who can speak personally about the issues they deal with on a daily basis.

“It’s a wonderful thing,” Lisa comments. “We can really expand the idea of what masculinity is all about.”

Who Reads the Blog: Both Men and Women Care About Gender Roles

The Good Men Project sees 5 million visits per month, and the feedback is mostly positive. Lisa says the goal is to open people’s eyes to how men are changing to become better boyfriends, husbands, and fathers. The typical age of the readership is between 21 and 42, but the writers cater to all different age groups and backgrounds.

While there are people who experience personal growth by hearing these diverse and enlightened perspectives on manhood, still others would much rather stick to the status quo.

“In dating and relationships, there are a lot of men who just want the rules to be the way they’ve always been,” Lisa says, “but we think that’s good because it shows us just where the areas are that we could actually do the most good in changing the way masculinity is viewed.”

The Good Men Project has a community of mostly men, but plenty of women get involved as well.

With article topics like “The Lost Value of Commitment” and “The Struggle Between Men and Women to Communicate,” this website covers a lot of important issues for anyone trying to date in a modern world. A particular theme in this area is how men who are trapped by stereotype have difficulty sharing emotions and being vulnerable — which means they struggle to have healthy, intimate relationships.

These posts are affirmations, with heartfelt testimonials offering guidance to both men and women. Whether you’re single or in a relationship, you can read through thousands of helpful articles to figure out the best way to approach sex, love, and anything in between.

“It’s all just really exciting to see that we’re forging a new path where we can get rid of the outdated stereotypes,” Lisa says, “and build a new model together, both men and women.”

Looking to the Future, The Good Men Project Expands Their Reach

The Good Men Project is looking to grow into not just written content but podcasts and videos to make their discussion more engaging for the community. Lisa explains that they currently host a weekly conference call to more directly include listeners. The hope is to expand this popular segment into in-person events or meetups where people can share their personal insights.

Whether it’s a single man worried about being treated as a sex fiend or a father who doesn’t want to scare his daughter away from a healthy sexual relationship — the voices on this blog advocate for unique and balanced lifestyle unencumbered by restrictive gender roles.

Just because some ideas are traditional, that doesn’t make them true (or healthy). The Good Men Project pushes back against misguided assumptions and adds a unique and positive message to an international audience of men and women.

“We’re trying to expand beyond just the content we put out every day and really grow into a community of people who know each other, help each other, talk to each other,” Lisa says, “so that we move this conversation forward together.”