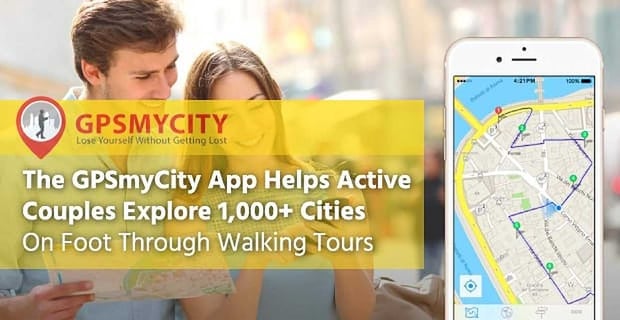 The Short Version: When you’re vacationing in a new destination with someone special, escorted tours and sightseeing buses may not be your favorite way to explore a new city. Jim Zhu launched the GPSmyCity app in 2010 to help more independent tourists learn about locations at their own pace. The app covers more than 1,000 cities and offers nearly 7,000 walking tours organized by topic, including nightlife, food, or shopping. Each tour provides a digital map and information about every attraction you’ll visit. Best of all, the app doesn’t require cellular or internet service, so you can use it overseas without racking up expensive international charges from your wireless provider. The app is available on both iPhone and Android and has had more than 12 million downloads since its release.

Jim Zhu loves to travel and explore new cities around the world, but he’s never been fan of tour buses. He doesn’t like being trapped in a seat and subjected to someone else’s schedule. Jim is healthy and active and prefers the freedom of walking from place to place at his own pace. But traditional maps can be cumbersome, and before smartphones came on the scene, phones didn’t offer much help when navigating a new city.

But that changed in 2007 when Apple launched the iPhone.

“When the iPhone was released and came with a GPS function, I thought why not combine these things? Use the iPhone’s GPS navigation function and put all the information in the app so you can tour by yourself,” he said. He had worked in Silicon Valley for 15 years before starting his own business, so he knew the ins and outs of tech companies.

As a natural problem-solver, Jim decided to run with his idea. He founded GPSmyCity in 2008 with the goal of creating an iPhone app that offered engaging walking tours without requiring cellular or internet service. The app officially launched for iOS in 2010. “It turned your iPhone into a personal tour guide,” said Jim, who also serves as the company’s CEO. Next, the app was made available on Android and has had more than 12 million downloads since its launch.

The GPSmyCity app gives couples a different way to explore cities other than from a tour bus.

GPSmyCity, which allows you to learn about local attractions from experts, is perfect for couples who want help navigating a new city while on a romantic getaway. Forgo the expensive tour groups and crowded tour buses and use the app to go on a relaxed, self-paced walking tour tailored to your unique interests — and on your schedule.

“I created the app to solve my own problem, but there are a whole lot of people out there who have the same problem,” Jim said. “Now that the app has 12 million downloads, that gives me a lot of satisfaction.”

Jim and his team at GPSmyCity love to travel and explore, and they’ve turned that love into a passion for helping others learn about new destinations on their own terms.

Nearly 7,000 Tours in Locations Across the World

GPSmyCity offers nearly 7,000 walking tours in over 1,000 cities all around the world. Jim told us that, depending on the city, the app has anywhere from a handful to 30 different walking tours available.

Many of the tours have specific themes or topics, including romance, shopping, nightlife, or food, so you can choose the ones that best suit you and your partner. You can take a dessert-themed tour in Paris or visit all of Amsterdam’s oldest pubs on another tour.

You can even use the app for a staycation and spend a weekend afternoon exploring the parts of your own city you’ve never seen. And the app doesn’t just take you to destinations, it also tells you more about them.

“For each walking tour, there is a list of attractions and a map,” Jim said. “You use the navigation tool on your mobile device — an iPhone, Android, or iPad — to get from one place to another. At each stop, it comes with a photo and description that tell you information about the place.”

The app is designed to work offline and allows you to download maps. When you travel abroad, you won’t need cellular service or an internet connection to use GPSmyCity. That is a significant benefit since using your smartphone internationally without the proper data plan can result in an obscenely large bill.

GPSmyCity can cover more destinations than any other walking tours app because the company works with numerous travel experts to create world-class content and maps. The team creates some of the walking tours in-house, but they also work with many travel writers, bloggers, and locals to create some of the more in-depth tours.

The local experts write for GPSmyCity and contribute walking tours that give users an authentic, compelling experience in each city. The GPSmyCity team adds walking tours in new cities each week thanks to its relationship with local content creators.

GPSmyCity partners with local bloggers and experts to provide users with an authentic experience.

“The content continuously improves by leveraging these relationships, and we can cover more cities,” Jim said. “We talk about app and functionality, but the content must always be evolving and expanding.”

Collaborating with people who live, work, and play in a city produces more intimate, special tours than you can hope to get in a travel guide. And those moments away from the crowds are the ones couples remember when they return home.

The Future of GPSmyCity: Upgrade the App & Add More Tours

Many globetrotting couples echo Jim’s disdain for tour buses and prefer to share more intimate moments with their significant other while exploring a new place. And walking through a city only adds to the sense of wonder they feel while on vacation.

That is why GPSmyCity is so popular, but the company isn’t resting on its laurels. Jim, the company’s developers, and the content team are continually improving the app, and GPSmyCity is in the process of adding greater functionality to its Android app, bringing it in line with the iOS counterpart. The new Android version is scheduled for release in summer 2018.

And new features —for both Android and iPhone — will be added based on suggestions from users.

“We have a feedback function that helps us get feedback from users on a daily basis,” Jim said. “People send suggestions, and we look at those and keep improving and enhancing — so it’s an ongoing process.”

Because Jim knows all about how an idea that solves a problem for one person can resonate with millions of people. 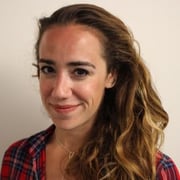