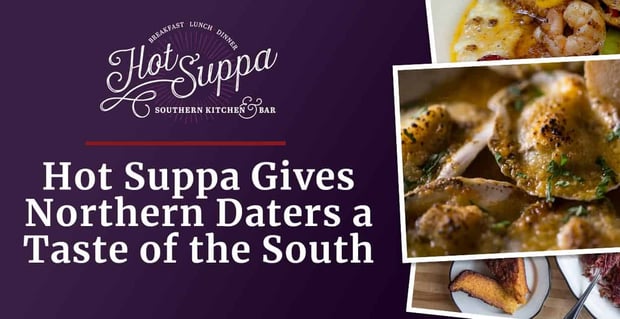 The Short Version: Maine may not be known for its fried green tomatoes, pulled pork, and Nashville hot chicken, but Portland’s Hot Suppa is. The restaurant features the best cuisine the South has to offer in a Northern destination that is perfect for date night. Hot Suppa serves Southern staples for breakfast, lunch, and dinner and features a creative cocktail menu. For offering Northern daters delicious Southern comfort foods, Hot Suppa earns our Editor’s Choice Award.

Alec Sabina’s brother Moses always loved to cook. But when he attended college in Tennessee, he got a different kind of education — a lesson in soul food.

The brothers were raised in Portland, Maine, but Alec’s business background and his brother’s self-taught culinary skills soon dovetailed. In 2004, they decided to take a tour of the South to discover what makes Southern cuisine so appealing.

“Our goal was to see what a neighborhood restaurant is like, a community place where everybody is welcome,” Alec said. “At the time, there wasn’t anything in Portland in between a greasy spoon and weekend brunch place.”

As they created recipes based on their travels, they realized that they could bridge the gap between the unique tastes of the South and the more mellow palettes of Northerners. The result was Hot Suppa, a restaurant that brings flavors from the brothers’ culinary journey to diners and daters in Portland.

“We wanted to raise the bar a little bit, without being too expensive, and offer home-style cooking,” Alec said. “That’s the slant to our menu, so we’re a little bit different. Making all our food from scratch also sets us apart from other places.”

Along with its delicious food, the restaurant’s small, cozy atmosphere offers a taste of down-home country style as well. The Hot Suppa team goes out of its way to make the date night experience comfortable and welcoming — rather than stuffy or pretentious.

Hot Suppa opened in 2006 and was part of an influx of new restaurants that established Portland as a blossoming foodie heaven. Restaurateurs came from New York City and the nearby Boston metro region to escape the increasing cost of rent. As a result, the small city got a reputation as an excellent place for a dinner date, a fact that was even highlighted in Bon Appétit magazine.

But that hype is not the kind of thing that goes to Alec’s head.

“We just keep doing what we do,” Alec said. “Our style of food is always relevant. People always want to have a waffle or come in and get a couple of eggs or corn beef hash, scrambled eggs, or omelets.”

The restaurant offers a casual yet classy vibe that makes it perfect for a date night.

Although the restaurant is ideal for casual dates with its comfortable booths, it also projects a much classier vibe than a Southern diner. Its clientele ranges from college-aged couples to families to professionals.

As Maine’s most populous city, Portland is also a year-round destination. Tourists often stay in Airbnbs and spend their days working up an appetite on the ski slopes of nearby Sugarloaf or Saddleback or hiking in the forest.

“For people who are going out on dates, it’s a safe bet because it’s comfort food and not too pretentious or stuffy, where someone might feel uncomfortable,” Alec said. “If you were to bring a date there, it’s a good barometer of the other person’s taste and if it’s an authentic connection. If someone didn’t like it, that may be a red flag for the other person.”

Alec said that his goal with Hot Suppa was to create an institution that both singles and couples enjoy time and again — and that starts with the restaurant’s memorable menu.

Hot Suppa puts a twist on many favorites, including corned beef hash and chicken and waffles.

Its lunch menu is also filled with deluxe sandwiches. Customers can order burgers, including plant-based varieties, shrimp, corn, and andouille soup, or mac and cheese. Its dinner menu offers more hearty options, including its popular fried chicken and waffles that Hot Suppa makes with a sweet tea-brined fried chicken and a made-from-scratch buttermilk waffle.

“We also do a barbecued pulled pork mac and cheese that’s popular at night,” Alec said.

Other local vendors provide fresh ingredients, too, including Olivia’s Garden in New Gloucester, GrandyOats in Brownfield, and Snell Family Farm in Buxton.

Regulars may notice that the Hot Suppa menu has been pared down slightly due to the COVID-19 pandemic and local mandates that have caused so many restaurants to close their doors.

During the warmer months, Hot Suppa offers outdoor dining. After a short hiatus during the coldest time of the year, Alec said the team plans to return to provide take-out dishes of its popular classics to make dates at home a little more special.

“Restaurants are the backdrop of life. We see people getting engaged or coming here for their first date. Life is happening there, and that’s a special thing to be a part of,” Alec said. “We emphasize our servers providing good service and hospitality and creating a team environment where the guests feel taken care of, but not over-serviced.”

Those heading to Hot Suppa for a date also won’t have to worry about being underdressed. Alec said he’s seen couples come in wearing their pajamas for breakfast. That lack of fuss allows the team to focus on cooking the food well without forcing patrons to break the bank.

And a telling mark of a good restaurant is when loyal customers take pleasure in introducing it to their friends or new dates.

“We’re a small restaurant, and we can get busy; our waits are a little long sometimes,” he said. “Most people will wait it out and are still really impressed that it lived up to whatever hype they heard. They say they’ll wait over an hour anytime for us.”