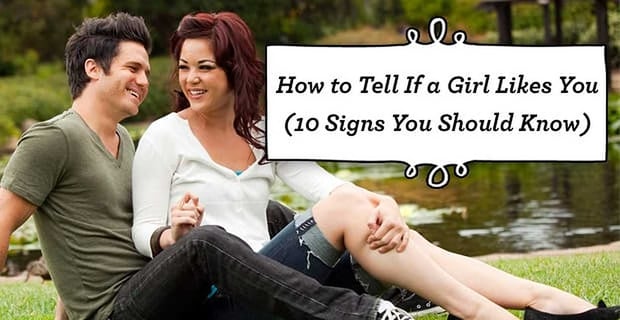 Sometimes the hardest step in dating is figuring out if the girl you are flirting with likes you or not. Is she just being friendly, or is she really into you? The answer lies not just in what she says — but in her non-verbal cues as well.

As a woman, I feel I can tap into not only the science, but my experience of being into certain guys and trying to show it to help shine a light on reading a girl’s cues.

According to Psychology Today, we move our feet toward what we want and move them away from what we don’t want.

Basically, the way a person uses their legs and feet reveals where they want to go. So when a woman’s feet and body are facing toward you, most likely she’s into you. (This can be especially helpful to tell if a shy girl likes you because she is probably scared to come out and say it.)

2. She Touches or Reveals Her Neck

According to ScienceofPeople.com, when a woman touches or exposes the small dip between her neck and her collarbone (called the suprasternal notch), she is drawing on a subconscious need to let you know that she fancies you.

3. She Touches, Licks or Bites Her Lips

More than likely she wants you if she touches, licks, and/or bites her lips. The lips are a very sensual, if not sexual, body part. “We stroke ourselves for two reasons: to draw attention to a body part and to subconsciously tease the person watching,” says sex and relationship expert Tracey Cox in her book “Superflirt.”

One of the top signs that a female likes you is when she bites, licks, or touches her lips.

4. She Blushes or Gets Flushed Around You

ScienceofPeople.com strikes again. According to that website, “When we are attracted to someone, blood will flow to our face, causing our cheeks to get red. This happens to mimic the orgasm effect where we get flushed. It is an evolutionary way the body tries to attract the opposite sex.”

So when you see her face get flushed, her body can be telling you what she is feeling, even if she doesn’t know it yet.

5. She Mirrors What You Do

Mirroring is copying someone else’s body position or movements. If you’re sitting next to someone you respect or look up to and they’re leaning back with a foot resting on their knee, there’s a good chance you’re sitting the same way and may not even notice that you’re doing it.

This has importance in the game of attraction as well. A woman who is attracted to you may mirror your body position. If you’re at dinner and you’ve got your hands sitting on the table a certain way, and you notice your date holding her hands the same way or picking up her glass when you do, that’s a good indicator of interest.

6. She Touches You “Accidentally”

We are not talking hugs or kisses here. We are talking simple touches in places like the arm or leg that may seem innocent, but they actually indicate an interest in being close to you. So if you happen to catch these flirty signals, try inconspicuously touching her arm or shoulder (stick to the safe spaces) to see if she responds well.

7. She Keeps Her Eyes on You

Eye contact is one of the most important indicators of attraction. When a woman locks her eyes onto you and keeps them there, she is telling you through her eyes that she’s interested in you.

A lot of girls won’t be able to take their eyes off a man if they want him.

8. She Laughs at Your Jokes (Even the Bad Ones)

You can tell she really likes you if she’s laughing at a joke or funny comment that is more Pauly Shore than Chris Rock. My female clients tell me all the time that they love a man with a great sense of humor, but it’s still cute when a guy is trying to be funny and misses sometimes. By showing big smiles and/or laughter, she’s giving you a sign that she wants you to feel good and validated.

9. She Tilts Her Head & Bashes Her Eyelashes at You

A simple tilting of the head and batting of those lashes may seem like nothing, but when a woman does this at you, she is telling you she is playful and may be more interested than you think.

10. She Flips or Touches Her Hair

A woman’s hair is considered a sign of her femininity — so when she is playing with it, she is saying she really likes you and that she is opening herself up to you.

When a woman is playing with her hair while talking to you, most likely she’s interested in you.

I may be a married relationship expert, but back in my single days, I was very much like the women you’re probably dating. Looking back, I know when I liked a guy I did things to show him I was interested. Very few women want to just tell a man she likes him (although, for any women reading this, I highly recommend it). Alas, women can be creatures of subtlety.

So how can you tell if a girl likes you? You need to read between the lines of the conscious or subconscious signals she’s sending your way. Now that you have an idea of non-verbal cues that can play a big part in finding out your date’s interest level, it’s time for you to go put them to the test.

Amie is a certified master life and relationship coach, receiving her training at the Relationship Coaching Institute. Since then, Amie’s relationship coaching and mentoring support has empowered countless singles to discover their true selves for the first time. Her non-judgmental approach allows people to a feel safe and open to communicate freely. By employing a newly ingrained belief system, along with using methods and tools that are proven time and time again, her clients discover the true value of who they are. It’s then for the first time in their lives, they begin to move forward in a positive way by attracting the meaningful relationship they never thought possible.

Say Goodbye to Her Mixed Messages

How to Ask a Girl If She Has a Boyfriend