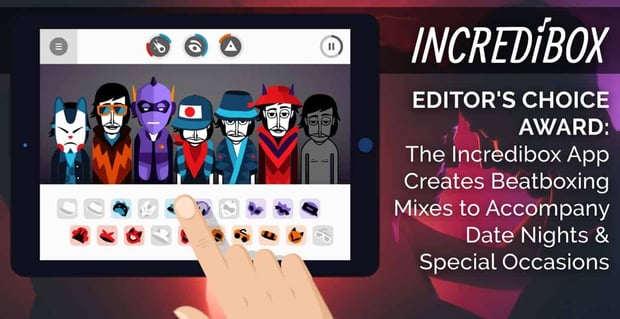 The Short Version: Music can lift people’s spirits and get them dancing and laughing. That’s a powerful tool in the hands of couples planning a special date night, engagement party, wedding, or other romantic occasion. Creative couples can use the Incredibox app to make one-of-a-kind musical tracks that inspire celebratory, joyful, and romantic moods. Incredibox has a variety of killer beatboxing sounds and crooning voice stylings for you to play around with, and you don’t need a degree in musical composition to come up with a mix that sounds incredible. To date, over 50 million people have used Incredibox as a source of musical entertainment in a variety of social settings.

Last year, a friend’s wedding reception got off to a rocky start because the bride’s uncle was acting as the DJ, and he seemed determined to play nothing but ’70s and ’80s songs. After dancing halfheartedly to Micheal Jackson’s “Billie Jean,” everyone deserted the dance floor when “Ice Ice Baby” started playing.

Incredibox gives people the opportunity to hone their DJ skills and make musical mixes on their mobile devices.

While Vanilla Ice collaborated and we listened, the bride made a beeline for her uncle to make a special song request. Within seconds, the speakers blared “Wobble Baby,” a group of bridesmaids came running, and the dance floor became crowded with people throwing their hands up in the air and wobbling.

A musical selection can make or break a party, and couples throwing a wedding reception, anniversary celebration, or another shindig should put some thought into those beats. One fun way to mix things up is by creating a playlist of original beatboxing songs through Incredibox, an award-winning music app.

Every Incredibox playlist is full of energy and heart, and it can bring a party’s energy levels through the roof. If you want to start your wedding reception, date night, or another special occasion on the right note, you can record and play an Incredibox mix that expresses how you feel in that moment.

More than 50 million players around the world have put on their DJ headphones and used the Incredibox application to make unique musical beats. Incredibox is currently ranked #2 in Music in the App Store where it has earned a 4.9-star user rating.

“This app is so cool,” said Amazon user Jeebeez in a review. “You can become a DJ in seconds. It’s incredible!”

Play Around With Funky Beats Until You Find the One

Here’s a riddle for you — what’s the difference between a house and a house party? A jamming playlist! Music is essential to celebrations big and small, and every song needs to strike the right chord if you want to encourage dancing, laughing, singing, and romancing.

Incredibox can help with that. It’s the ideal app for aspiring DJs to practice their arts and create amazing jams. It’s free to get started by either downloading the app or opening the web-based demo. You’ll pick from seven avatars to choose the beatboxing version that suits you. We recommend The Love for couples putting together a romantic playlist.

Once you’ve chosen the version you like best, you can start dressing your avatars in sunglasses, hats, and scuba gear to prompt them to sing and beatbox in different ways. Every clothing icon represents a different sound, all of which have been recorded by a real human voice. And they all blend well together.

As you go, you can unlock animated videos and new avatars designed to give you more musical inspiration. Starting your date nights, wedding receptions, or house parties on a high note is easy with one of these cheerful mixes in the queue.

Incredibox lets users play around with different tunes for as long as they want, and they can record and save the performance at any time. The app also has the option to auto-complete your virtual beatboxing band and create a variety of bopping, popping, and heart-stopping beats.

Thanks to Incredibox, couples can go on a musical adventure and show off their creative sides. It’s a fun way to while away an afternoon and generate a playlist of unique and unforgettable jams. An Incredibox mix can act as background music during a date, or it could be a fun opening number at a wedding reception. It’s up to you to customize, record, and hit play when you’re ready to party.

Many satisfied Incredibox users have reported using the app as their go-to musical maestro on trips, during dates, and at friendly get-togethers. After more than 10,000 reviews, the app boasts a 4.8-star rating on Google Play.

“I love this game to death!” said Bryant Rico Campos. “The game has hours of remixes to be made, and they all sound fantastic.”

Mishuko Emi said in his review, “The music is great. The animation is great. It’s an amazing app.”

How a Passion Project Inspired Over 8 Million Recorded Mixes

Incredibox started as an idea kicked around by three friends working freelance in France. They thought they could combine their creative skill sets to make an app that would make people stop and listen.

Developer Allan Durand did the coding, graphic designer Romain Delambily handled the animation, and musician and composer Paul Maulburet did the voice work (mostly beatboxing) to make Incredibox what it is today.

“They made all they needed from scratch,” according to the website. “After a lot of days, a lot of nights, liters of coffee, and too much cigarettes, they finished the game.”

Incredibox has won people over with its merry crew of animated beatboxers.

In 2011, the Incredibox team formed a company called So Far So Good — which sums up their attitude about the app’s success — to use their graphic design and multimedia experience to power more creative projects.

Today, Incredibox has over 420,000 followers on social media, and the app has been played more than 50 million times since 2009.

Looking to the future, the Incredibox team said users can expect nothing but improvements to make the app more engaging, more colorful, more customizable, and more musical.

To use the words of the So Far So Good website, “As long as Incredibox will be loved by users, the team will keep working on it.”

As my friend’s uncle learned, you can’t play any ol’ song and expect people to get on their feet and dance — it takes a good ear and a playful mind to put together a sure-fire dancing mix for a wedding, a party, a date night, or a special event.

Incredibox can help people make a musical mix that represents their personality and expresses their feelings in a memorable way. The app stays in tune with today’s trends and keeps things fresh by frequently adding new beatboxing sounds, avatars, and mix options.

In recognition of its 10th anniversary, Incredibox recently released a limited edition album, which has been streamed over 400,000 times. This album is full of catchy songs that can pump people up and give them a reason to dance with that special someone.

Whether you’re going on a date or planning an engagement party, you can depend on Incredibox to create a fun soundtrack worthy of that occasion. Rock on!