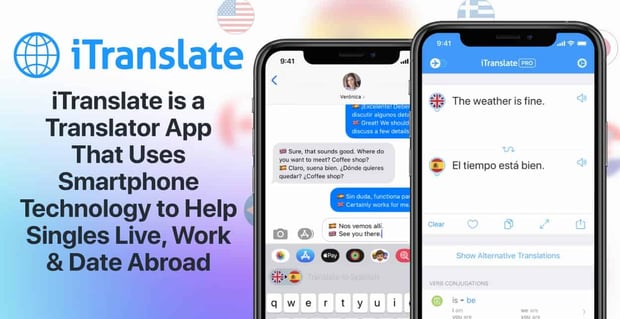 The Short Version: iTranslate has connected people across languages by offering a handheld translator app that is reliable and easy to use. The app pioneered smartphone translation tools in 2009, and it has been downloaded over 100 million times by both iPhone and Android users. Whether you’re taking a romantic trip abroad or wondering what your bilingual date is saying, you can use iTranslate to get instant translations of any text message, audio recording, or image.

While exploring popular dating apps, some singles can run into miscommunications that stymie relationships. One person says a polite hello, and the other person immediately asks for sex, and they both walk away dissatisfied. Mixed signals are all but inevitable in the swiping scene, and sometimes people feel as if they are speaking a different language from their dates.

Of course, there are times when daters actually are speaking a different language, and that complicates matters even further. If you and your online crush don’t share a common language, it can be extremely difficult to get a romance off the ground on a text-based dating app or site.

Thankfully, a seamless app translator has the backs of men and women looking for love both abroad and at home.

The iTranslate app can translate text messages instantaneously and integrate with dating apps so your conversations never miss a beat, and you always know exactly what your date is trying to communicate.

Since its launch in 2009, iTranslate has been downloaded over 100 million times and provided top-notch translation technology to people navigating different cultures and different languages.

“We’ve seen thousands of use cases where iTranslate has helped someone,” said Ylli Qerkini, the Head of Marketing. “We really love it. We see millions of translations a day, so we know we’re helping people in breaking the language barrier.”

Over 100 Languages in the Palm of Your Hand

When the first iteration of iTranslate came out in 2009, it was among the first 1,000 apps sold in the App Store. The developers thought it would be a useful tool for students studying abroad, and it became the go-to pocket translator for a new tech-savvy generation.

Each day, the app facilitates millions of translations in over 100 languages, and the company has won awards for its innovative design and features.

The iTranslate team has grown from a four-person startup in 2016 to a 40-person company today, but Ylli said the team still maintains a startup mentality in the Austrian offices.

“We’ve tried to make sure our team has the best and most enjoyable work environment possible,” he said. “We try to take on the U.S. spirit in terms of providing a cool working environment where people really feel comfortable.”

An Austrian-based company has made iTranslate the stellar tool it is today.

The iTranslate app is a multinational product designed and perfected by a multinational team interested in exploring new cultures and learning from people of different backgrounds. Every day, the team can see how many translations have been completed on the app, and they enjoy hearing about every success story and positive review.

For instance, one American married couple reached out to iTranslate to say that the app helped them when they adopted a blind girl from China. The app’s voice-to-voice translation technology allowed them to communicate with her for the first few months of her coming to live with them.

“That type of story really makes you proud of where you work and the product you work on,” Ylli told us.

At first glance, iTranslate may seem like a simple travel tool, but its versatile translation features have applications closer to home as well, particularly in bilingual families and multilingual cities. Everyday people rely on the app’s translation technology to communicate with clients, students, friends, and loved ones who speak another language.

Over 100 million people have installed iTranslate on their smartphones, and they use it on menus, street signs, text messages, in-person conversations, and dating apps.

“Our users are everybody,” Ylli said. “We have learned one thing, and that is that we don’t have a typical user. The iTranslate app appeals to people of all ages and genders.”

The iTranslate app is currently available in 120 countries, and its ability to translate over 100 languages with a simple screenshot, picture, or recording has helped many people facing a language barrier. It doesn’t matter if you’re in another country or sitting at home, you can use iTranslate to turn foreign words into familiar phrases.

The app’s all-purpose translation tools can come in handy in a variety of situations.

Professionals ranging from physicians to policemen have depended on iTranslate to help them communicate with people they deal with on a regular basis, and it has been a great help to students and teachers in the classroom as well.

The iTranslate app can lead to romantic moments in the dating scene because, by its very nature, its tools bring people together and help them connect. Multilingual couples can also use the app to write or translate love notes to one another, and it works great for singles messaging someone who speaks a different language.

The voice-to-voice translation tool has won awards because it offers a unique way to translate conversations in real time, so people can communicate naturally with one another in two or more languages.

Users can also take a photo of foreign words or characters and get an instant translation in the iTranslate app. That way, even if the words are in an entirely different alphabet, they can still understand what’s going on.

The Translation Keyboard is a New Asset for Online Daters

For years, iTranslate has been a leader in the industry and contributed meaningful translations to millions of travel experiences, date nights, school lessons, and other multicultural interactions — and now it’s gotten even better. The app recently launched a translation keyboard to allow it to integrate with different apps on the same device.

The iTranslate keyboard is a unique feature that can translate texts in any app. Users don’t have to stop what they’re doing and copy/paste text in the iTranslate app — it works seamlessly throughout bilingual conversations.

Online daters can make use of the iTranslate keyboard when chatting with the mutual matches on dating apps. Its translation technology can help smooth the way as you get to know someone online and allows you to chat with more people than ever before.

The keyboard works well whether you’re chatting on Facebook or sending an email to someone. It offers immediate assistance on every app where you conduct personal conversations and occasionally need a translator.

Thanks to iTranslate, singles can tackle foreign dating scenes without worrying about the romance getting lost in translation. Its keyboard feature helps individuals communicate their desires more clearly and pick up dates at any time and in any language they wish.

“The iTranslate Keyboard is designed to solve the problem of language barriers while texting,” the team said. “Stay in touch with your friends, family, and colleagues all over the world, because we know that communication is so much more than speaking face to face with another person.”

iTranslate Facilitates Conversations Around the World

Singles now have the ability to overcome language barriers and build common ground with people from different cultures and nationalities. All they need is iTranslate backing them up in online conversations, in-person chats, and other multilingual situations.

This app can provide instant translations on text, audio, and images so that singles can put an end to at least some of the miscommunications in the dating scene.

Over the years, the iTranslate team has listened to users and endeavored to provide cutting-edge technology to help them navigate and understand different languages both online and offline.

“We really take feedback close to our heart,” Ylli said. “We want to figure out what our users want and how they’re using the app, so we can launch new features and make it easier for them to have conversations.”