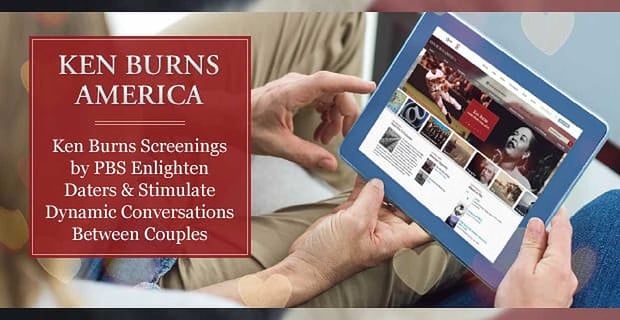 The Short Version: Ken Burns is an American filmmaker enraptured by the past. His artistry reaches into archives of black-and-white photos and extracts a complex historical narrative of people and events. Through Ken Burns America, a screening series and integrated website sponsored by PBS, he regularly showcases significant moments in American history so viewers can learn from the mistakes and triumphs of those who came before them. For daters, Ken’s award-winning documentaries provide an intimate setting to engage in intellectual conversation and expand your understanding of the world together. Enjoy your own private screening of Ken’s films with your date, and you’ll find yourself transported to the Civil War, the Industrial Revolution, the Great Depression, and other historical milestones that have shaped today’s society.//

Back in the ’50s, my great aunt and uncle partied a lot. Even when they became parents, they frequently went out to house parties and dance clubs. “We’d set the kids up in the movie theater,” my great aunt says offhandedly. “They were fine.”

When I hear their stories of the good old days, it’s hard for me to picture my conservative, 80-year-old great aunt and uncle doing anything wild and crazy. Their carefree party days are decades behind them, and now they prefer spending their nights in — most likely watching a good documentary. They sit in their matching armchairs, holding hands, and look back on history with patient contentment.

There’s something romantic about a couple who can enjoy both thoughtless revelry and quiet intimacy, growing and learning together through the years.

Ken Burns America, sponsored by PBS, produces thoughtful, informative films to broaden the horizons of viewers like my great aunt and uncle. The online screenings offer daters the opportunity to discover a new perspective and start a meaningful conversation with someone special. For couples and singles alike, staying informed about salient issues can make conversation flow easier on dates.

Ken Burns aims to instill “a sense of glory greater than false nostalgia” about our complex heritage.

Whether you’re single and wish you felt more knowledgeable on a date or you’re a couple looking for a reason to turn down the lights and stay in, Ken Burns screenings engage audiences across the country. For over three decades, Ken’s incisive filmmaking has won him much praise and recognition. In 2008, he received the Lifetime Achievement honor at the 29th Annual News and Documentary Emmy Awards.

According to his official website on PBS.org, “His films look at more than just individual subject matter; they drive audiences to go further into themes that are central to who we are as a nation and as individuals.”

Respected Filmmaker Ken Burns Is Fascinated by Past Legends

Even as a child, Ken Burns preferred nonfiction to fiction, pouring over his family’s encyclopedia in his free time. When he was 17, he got an 8 mm film movie camera for his birthday and wasted no time shooting a documentary about an Ann Arbor factory.

He worked in a record store while earning his degree in film studies and design at Hampshire College, an alternative school in Massachusetts with a focus on self-directed study and narrative evaluations instead of grades.

“The college was an amazing concentration of great teachers and some modest equipment and no money,” Burns recalled in an interview. “We basically made these films for nonprofit clients at cost. It really put us into the real world in a very interesting way.”

Once he graduated in 1975, Ken co-founded a film company, Florentine Films, and began developing his signature style of storytelling. For visuals, he relies primarily on still pictures, slowly panning across or zooming in on faces, guiding the viewer’s attention. He accompanies these images with poignant music, vibrant sound effects, or impassioned narration of historical writings. His masterful techniques evoke the emotions of the time period, bringing history to life in lauded documentaries like “The Civil War” and “Brooklyn Bridge.”

In his films, lectures, and overall career, Ken strives to lead a national dialogue about issues that matter. Daters will find conversation starters on a variety of subjects by taking a look at his distinguished documentaries on PBS.

Ken Burns America makes films to give viewers a greater appreciation of the past as well as the present. Every clip is carefully constructed to impart the passions and attitudes of the time. Watching Ken’s documentaries can be a wonderfully intimate way for daters to spend an evening.

For baseball fans, history buffs, nature lovers, jazz enthusiasts, and anyone with a passion to learn, Ken showcases all the grit and glory of America’s legacy. If you’re looking for a topic that’ll incite intellectual discourse with a date, these films are a great resource.

If you want to study up before you watch a documentary, you can use the Ken Burns America website to read essays about American history and pick up some fun facts to impress your date as you watch “The Civil War,” “The Roosevelts,” or “Baseball.”

By delving into the subjects of racial tension, nature conservation, and other hot-button issues in history, Ken shows the complexity of the past and how it echoes into the future. In a 90-minute documentary called “The Address,” Ken Burns focused on how words from the past can inspire people — even today — by telling the story of students required to memorize Lincoln’s Gettysburg Address.

To continue learning (and maybe pick up some quality movie ideas for your next date), you can sign up for the quarterly e-newsletter and hear the latest from Ken Burns and Florentine Films. If nothing else, his insights into the past will certainly give you something to talk about with your date.

Focused on a variety of subjects, his films offer captivating journeys into another time and place. “All my work,” said Ken, “is about waking the dead.”

From drinking cocktails in their youth to discussing Jackie Robinson in their old age, my great aunt and uncle love spending time together — even after over 60 years of marriage. If you ask me, the secret to their success as a couple is that they pay attention. They take the time to understand each other with open hearts, and they enrich their relationship by never shying away from learning something new.

With Ken Burns as your guide, you can stay in and take a cinematic trip down memory lane, adding depth to your dates. His screenings on PBS tell the story of flawed heroes from the past and impart historical lessons to contemporary America. If you’re looking for a stimulating conversation, Ken’s films are an excellent place to start.

“I think we have a hunger for national self-definition,” Ken said about why he makes documentaries. “Without a past, we deprive ourselves of the defining impressions of our being.”