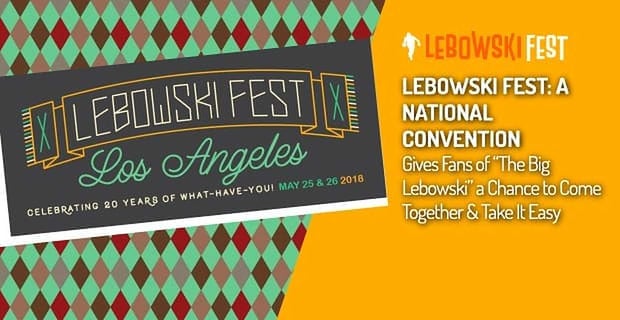 Lebowski Fest: A National Convention Gives Fans of “The Big Lebowski” a Chance to Come Together & Take It Easy

The Short Version: Some people fall in love for the first time at the movie theater, and it’s not always their date they’re taken with. Sometimes a great movie can sweep you off your feet as the lights dim. When “The Big Lebowski” hit theaters in 1998, it seemed destined to become a cult classic. From its quotable lines to its relatable characters (who could ever forget Jeff Bridges as the Dude?), the American crime comedy tickled the funny bones of moviegoers everywhere and still has an enthusiastic fan base known as Achiever Nation. Now, over two decades later, Achievers gather at Lebowski Fest to remind themselves why they fell in love with the movie in the first place. This national convention takes place every year in a bowling alley in Louisville, Kentucky, as well as a few other major US cities. Attendees enjoy a costume contest, trivia competitions, and, of course, a screening of the film that brought them all together. You can go to this popular event to make friends and romantic connections in a community of enthused movie buffs.

Will Russell is a die-hard fan of “The Big Lebowski.” He knows all the dialogue by heart and estimates that he’s seen the film well over 100 times. When he introduced the cult classic to his girlfriend one night, she couldn’t believe he was still laughing out loud to something he’d seen so often, but that’s just how enduring the legacy of this Coen Brothers film is.

Over 1,000 attendees come to Lebowski Fest every year to mix and mingle.

In October 2002, Will organized the first Lebowski Fest to give fans of the movie (they call themselves Achievers) an outlet to share their enthusiasm for The Dude. The event began in Louisville, Kentucky, but it has since become a nationwide phenomenon. The 17th Annual Lebowski Fest will take place July 2018, and Will expects over 1,000 Achievers to show up.

According to Will, “The Big Lebowski” is the kind of movie that grows on you. You may not exactly get it the first time — that convoluted plot has had many a first-timer scratching their heads — but, by the third or fourth viewing, you might just find yourself nodding along to the Dude’s nonchalant wit and laid-back approach to life.

Lebowski Fest typically features a screening of the movie as well as a bowling night, costume contest, trivia, and special guest appearances. This year, in honor of the 20th anniversary of the movie’s release, Lebowski Fest will feature a live tribute to the soundtrack played from start to finish.

If you want to meet a special lady or dude or what-have-you, you can show up to Lebowski Fest and break the ice by buying your crush a White Russian or inviting him or her to bowl a few frames.

Started By a Few Guys Bored in a Parking Lot

Will and his buddies were at a tattoo convention trying to sell T-shirts (and not doing so hot) when they got to chatting about “The Big Lebowski.” They loved the movie and could quote a lot of the funniest lines. A couple total strangers caught the reference and began making inside jokes about marmots, pederasts, and El Duderino.

After the success of the first Lebowski Fest in 2002, the founders decided to create an annual convention for people who love “The Big Lebowski.”

Will said they never expected it to be very popular. “We decided to try it as a joke really,” he recalled. “We didn’t think many people would show up, so we got a dirt cheap bowling alley, and then 150 people came.”

The organizers were shocked to see so many people coming out to celebrate “The Big Lebowski.” They realized they were onto something. The next year, 1,200 people came to their event, and Spin Magazine included it on a list of the top summer events in the US. They’ve been keeping the whole durned human comedy going ever since.

“When we started this, we had no idea it would happen again,” said Will. “Now some people have met at Lebowski Fest and gotten married. Groups of friends form every year, and they stay in touch online between events.”

Lebowski Fest is typically a two-day event. The first night is a low-key movie night. They put the film up on a big screen and invite Achievers to laugh at all the classic quips, awkward moments, and cussing. So much cussing.

The next night is a bowling night. People show up in droves to enjoy unlimited bowling as well as trivia and costume competitions to decide who’s the Dudest of Dudes. Lebowski Fest has also been known to host special guests, including musicians and actors associated with “The Big Lebowski.”

The popularity of Lebowski Fest has prompted the event’s organizers to expand outside their home state of Kentucky and now host events in major cities across the US. You can get tickets for a Semptember 2018 Lebowski Fest in Chicago or the Los Angeles fest in May. LA is where the movie is set, so this event is bound to attract crowds of Achievers looking to recreate scenes from the movie in a dynamic atmosphere.

You can take a date to these events or show up by yourself to make friends with people who all have at least one thing in common: They can’t get enough of “The Big Lebowski.”

A Fun & Chill Place to Mingle With the Achiever Nation

Lebowski Fest has earned a loyal following over the years. People love this event — almost as much as they love the movie that inspired it. Many Achievers socialize, arrange meetups, and quote the movie on the convention’s Facebook page, which has over 210,000 likes.

“What better way to celebrate the release date of ‘The Big Lebowski’ than throwin’ some rocks at the local bowling alley!” said Sherry Lias on Facebook. “Can’t wait for Lebowski Fest in Louisville.”

“You absolutely got to go to Lebowski Fest. It’s a hoot.” — John P. Clarke, an Achiever from Georgia

“Looks like we’re getting the band back together!” said John P. Clarke. And a friend posted a photo of a group of Achievers, saying, “I’ll be there, man.”

People come from all over the world to enjoy some White Russians at the bowling alley with some of their closest buds. Anything goes, and all are welcome for a couple nights of good vibes and good friends. Achievers come by themselves or with friends and find themselves surrounded by a community of fun-loving men and women dressed in their most Dudetastic duds.

“The best part of Lebowski Fest is the connections fans make,” Will said. “To know people have met their friends and partners here is a great thing.”

In 1998, the Coen brothers created an absurdist adventure with a confounding plot, a reluctant hero, and an awesome soundtrack. Today, “The Big Lebowski” still captures the imaginations of audiences everywhere. The story is ludicrous, and Achievers love that about it. Even though they’ve seen the movie hundreds of times, they still laugh at the jokes and gags in this cult classic.

Anyone can show up to Lebowski Fest and have a good time drinking, bowling, and laughing with fellow movie buffs. The national convention offers Achievers a chance to share their enthusiasm in a chill setting.

Whether you’re looking for a new friend or a potential lady friend, you’ll meet a lot of interesting, outrageous, and hilarious folks at this annual shindig. Will said people of all types hang out at Lebowski Fest. “You’ll see lawyers and business executives bowling alongside unemployed layabouts,” he said. “It’s a broad spectrum of college-aged kids and full-grown adults.”