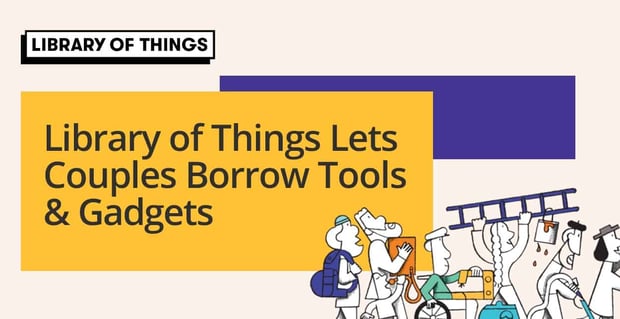 The Short Version: At some point in their relationship, couples may decide to tackle something challenging. It could be completing a simple home improvement project, or making a fancy pasta dinner from scratch for date night. But that doesn’t mean they need to buy a pressure washer or a pasta maker for one job. Instead, they can borrow one of those items from Library of Things in London. For a small fee, couples have access to the right tools to get the job done and keep their relationship and home lives going strong. And they won’t even need extra storage space.

On average, someone who owns a power drill uses it for only 13 minutes during its entire lifetime. The rest of the time, it may just sit on a shelf, in the garage, or in a drawer, collecting dust.

Many couples come to a point in their relationship when they want to roll up their sleeves and work on a home improvement project. But they face a dilemma when they need a tool like a drill. If they buy one, it may see little use once the project is done.

Borrowing from a friend may be an option, but where does a couple go when they need other items, like a pasta maker for date night, or a tent for a camping trip?

London’s Library of Things was founded to lend people the tools they need to keep projects fun and free of stress in their relationships. Customers can borrow cordless drills, pasta makers, tents, and many other items to save money and reduce the need to store things they barely use. And they can return the item whenever they finish so someone else can use it.

“There are lots of things people buy and only use once, and then they have to store them, and they take up space,” said Alys Penfold, the Community Manager for Library of Things. “In cities, you don’t want to sacrifice precious space. The fact is that consumerism isn’t working. We’d need three and a half planets worth of resources if everyone consumed like the U.K. does. Borrowing just makes a lot of sense.”

And Library of Things helps reduce the number of resources London needs, one borrowed tool at a time.

Friends Who Built Their Relationship Into the Business

Friends Emma Shaw, Sophia Wyatt, and Rebecca Trevalyan lived in small flats in London when they were students. They were short on space but creative and became inspired by the tool-lending libraries that popped up inside traditional libraries.

They also had the idea of letting people borrow more than just tools, which led them to launch Library of Things.

About six years ago, they decided to start the venture as a 10-week pilot borrowing project in their nearby library. The idea was to allow people to bring things that they weren’t using anymore or donate their time to staff the booth in exchange for the ability to borrow something. At the end of the project, the community clamored for them to continue.

Before long they opened another site near the original library. It was expanded to an online catalog of items covering six different categories that people could borrow for a small fee and keep as long as they needed.

The Library of Things team of 12 includes the three friends and co-founders, and a close-knit staff. Even pictures of the team are filled with laughter and kinship. They also have a group of passionate volunteers and have recently expanded to offer delivery options for those unable to come to the site to pick up their items.

“In London, there is a great community spirit because it’s basically a series of villages,” Alys said. “Our organization is very much built on friendship. We’re small and still in startup mode, but we’re expanding rapidly in the next year.”

Young Londoners Can Borrow Both Practical and Fun Things

While Library of Things is currently only in one site, the team plans to expand to other areas throughout London in the coming months. They find that the individuals and couples who use their service are often in their late 20s and early 30s.

That’s because many in the younger generations are likely still living at home, and the older population may already have the tools they need, according to Alys.

“In Crystal Palace, there is a young professional community of middle-class people moving into the areas with their first property,” she said. “And they don’t want to buy all the stuff they need.”

And Library of Things customers look to borrow all kinds of things. Anyone can browse what’s available to borrow in six categories: Adventuring, Cleaning, Cooking, DIY, Hobbying, and Gardening.

Sangeetha and Fergus borrowed the very popular Karcher Carpet Cleaner to get their house ready for Autumn.

Sangeetha and Fergus borrowed a carpet cleaner from Library of Things.

“It’s been a great birthday surprise for my partner who got waffles for breakfast today. Thanks to you and all at Library of Things, and to Francesca (our volunteer deliverer) who helped me keep the delivery under wraps. We’re looking forward to a waffle-filled weekend!”

Another fun idea to spice up a relationship is to borrow the ukulele. One partner could learn a song and sing it as a surprise gift that’s both memorable and minimalist.

Those looking to finally get around to spring cleaning can borrow a carpet cleaner or heavy-duty pressure washer. Pasta makers and ice cream makers are also popular for mixing up date nights. Some couples borrow a projector to set up an outdoor movie theater for a fun twist on Netflix-and-chill.

The items at Library of Things are always properly serviced and under warranty, so borrowers won’t have to worry about anything breaking. If they’re taking on a DIY project, and they’re unclear as to how to use a machine, the team will include an abbreviated user manual that contains instructions, tips, and feedback from fellow borrowers.

“User manuals are overwhelming. If it’s your first time using it, you just want basic instructions. We try to communicate to people in a way they can understand,” Alys said. “We are actively encouraging people not to buy things. So for them to borrow, and for it to be better than buying, it has to be high-quality things.”

Last year, Library of Things organized workshops to teach people how to make certain repairs, including on electronics. The goal was to help individuals, families, and couples in relationships build confidence in using tools.

Soon, Library of Things plans to open more self-service kiosks and provide delivery to a broader area so even more people can take advantage of borrowing instead of buying things they won’t use every day.

“It’s an old-fashioned concept. A lot of people already share with their neighbors, and we don’t have everything so we still love seeing that exchange happen,” Alys said. “It’s just convenient. For a lot of couples, it can cut out arguments about buying things so they can just get the job done. People are getting around to all those jobs they never got around to because they didn’t have the time. Now, they have the time.”