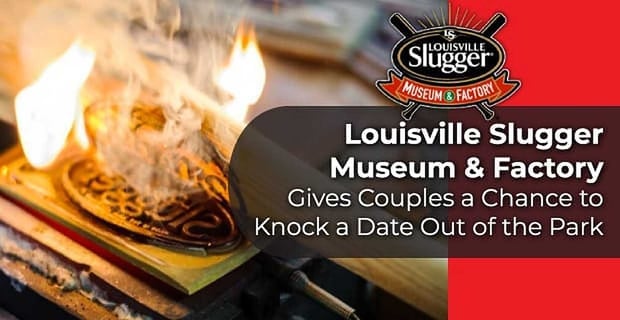 The Short Version: Hey, batter, batter, Louisville Slugger Museum & Factory offers a unique date opportunity for baseball fans. Instead of taking a date to the ball game, you can get a behind-the-scenes and hands-on experience at a popular baseball landmark. Visitors can learn about the players and the evolution of the sport in the museum, watch Louisville Slugger baseball bats being made in the factory tour, and then round out the day by practicing their swings at the batting cages. Unlike most museums, Louisville Slugger Museum doesn’t keep all its historical artifacts behind glass but actually lets visitors hold the baseball bats used by legendary players, including Hank Aaron, Mickey Mantle, and Bryce Harper. You can also get a personalized baseball bat made as a souvenir of your visit. There’s something for everyone here. Even if you’re not a baseball fan, you can’t help but be impressed by all the eye-catching and engaging exhibits, including the World’s Largest Baseball Bat, available at Louisville Slugger Museum and Factory.

If you want to avoid striking out on a date, you have to pick the right date spot. It should be a place where you feel comfortable. A place where you can share common interests and have something to talk about.

Louisville, Kentucky, has plenty of places for couples to bond over a glass of bourbon or a farm-fresh meal, but sometimes people are more interested in going on one-of-a-kind dates out in left field. That’s when they head to Louisville Slugger Museum & Factory on West Main Street.

Since 1884, when a local carpenter named Bud Hillerich made his first baseball bat, Louisville Slugger has been a major player in the baseball business. Generations of baseball legends have swung Louisville Slugger bats, and the family-owned business has made a name for itself by cultivating a deep appreciation for the sport and its fans.

Louisville Slugger bats are made by is a family-owned company and named after the first major league baseball player to use their hand-crafted bat.

Today, the Louisville Slugger Museum and Factory is one of the most popular attractions in Kentucky with over 300,000 visitors a year. To date, almost 10 million people have made a trip here. Visitors can learn about the history of baseball and the lives of baseball players in the museum, and then take a factory tour to see how Louisville Slugger makes its signature bats. From the timeline to the batting cages, the museum has a lot of different attractions for baseball lovers from all generations to enjoy.

“We have a family-friendly atmosphere, which makes for a nice place to go on a date,” said Anne Jewell, Executive Director of the Louisville Slugger Museum and Factory. “This place has a lot opportunities for couples to spark discussion, get to know one another, and have fun.”

Louisville Slugger Museum & Factory is entertaining right off the bat with its 120-feet-tall baseball bat, known as the World’s Largest Baseball Bat, towering over the building. People’s jaws drop when they see it. You can take a selfie with your date in front of the enlarged carbon steel replica and have an eye-catching memento of the day. You can also take pictures with life-size statues of Babe Ruth, Ted Williams, Jackie Robinson, Ken Griffey Jr, and Derek Jeter.

“From the moment you walk up, you have all these photo opportunities,” Anne said. “I think that’s part of what makes the museum a fun date spot.”

Another Instagram-worthy spot is the Signature Wall, which displays the engraved signatures of thousands of baseball players (including Cal Ripken Jr.) who have signed with Louisville Slugger over the years.

The museum’s educational exhibits cover a lot of bases, featuring the history of the sport from many different perspectives. You can learn about famous women baseball players, for instance, or you can take a tour of the factory to see how the baseball bats are made. You can also take a custom tour that focuses on a particular team or player. The museum goes to great lengths to provide entertainment for both casual and die-hard baseball fans. In 2018, Louisville Slugger Museum began hosting a special exhibit on “The Sandlot” to celebrate the 25th anniversary of its release. Because legendary movies never die.

In its temporary exhibit on “The Sandlot,” Louisville Slugger Museum will display authentic props, artwork, and behind-the-scenes photos from the movie.

If you’re a baseball fan, these exhibits will be in your wheelhouse and you’ll no doubt have a fantastic time here, but it’s also fun for people who aren’t so familiar with the sport to look around and learn about the history behind America’s favorite pastime.

“Our attractions appeal to a broad range of people,” Anne said. “People are often surprised they enjoy it even if they’re not a baseball fan.”

Swing for the Fences at the Batting Cages

The museum has at least one bat from every team in the major league in its Hold a Piece of History exhibit, where guests can actually hold bats used by the game’s greatest players. This hands-on experience impresses many visitors, not just die-hard baseball fans.

The Louisville Slugger Museum gives visitors a hands-on experience with its baseball bats.

Some of the museum’s bats have been in the hands of baseball legends, including Jackie Robinson, Joe DiMaggio, and Babe Ruth. Among its must-see bats is a Louisville Slugger that the Great Bambino notched 21 times to mark his home runs in 1927, the year he set a record by scoring 60 home runs in a season.

Visitors don’t just get to hold baseballs bats, they can also go out and swing model replicas of classic Louisville Sluggers in the batting cages. Bud’s Batting Cage is open during museum hours from 9 a.m. until 5 p.m. Monday through Saturday and 11 a.m. until 5 p.m. on Sundays. The museum is open later during the summer. Admission for adults is $15.

If you’re more of a pitcher than a batter, you can visit the Batter Up! area which offers a simulated pitching experience. Participants throw baseballs at a screen to see if they have what it takes to strike out a major leaguer.

The batting cages and Batter Up! game have a great energy because people enjoy just letting loose and playing around together. You can challenge your date to see who has the best batting average, or you can cheer each other on as you practice your pitches. It’s like Benny Rodriguez says, “Man, this is baseball. You gotta stop thinking! Just have fun.”

Batting a Thousand When It Comes to Customer Satisfaction

Louisville Slugger Museum & Factory often makes visitors feel nostalgic because baseball is a central part of many childhood experiences. Whatever connection you have to baseball, the museum’s staff aims to touch base with those memories of playing little league, going to the ballpark, or watching “The Sandlot” on TV.

On a factory tour, you can get an up-close look at the care and artistry that goes into making Louisville Slugger bats.

“Our tour guide was interesting, and he even tried to find the bat from my favorite Phillies player when I was a kid,” said Daydewise in a TripAdvisor review. “The museum brought back good memories.”

Turnerx3 visited the museum during a family road trip as a surprise for their teenage son who is a huge baseball fan. “The surprise was on us,” said Turnerx3. “We all loved this place!” The family took the factory tour, explored the museum, and had a personalized bat made to commemorate their visit.

“Louisville Slugger Museum & Factory was the highlight of our trip to Louisville,” said Jeanine W. “If you’re a baseball fan, you’re going to be in heaven.”

“Although we aren’t hard-core baseball fans, it was cool to take the tour of the factory and see how the bats are made,” said Michelle Z, “and you get a mini-bat as a keepsake with your tour!”

Louisville Slugger Museum specializes in adding a personal touch to baseball memorabilia. Some couples have even asked the company to engrave romantic messages — including “Will you marry me?” — into its signature baseball bats.

Next time you’re in Louisville, you can take your dating game up a notch by paying a visit to Louisville Slugger Museum & Factory. From staring up at the World’s Largest Baseball Bat that leans against and towers over the entrance to going away with a souvenir mini baseball bat in your pocket, the museum provides an iconic home-run experience you won’t soon forget.

“If you’ve ever played baseball or watched your kids or siblings play baseball, this is a must-visit.” — Annette B., a visitor at the Louisville Slugger Museum and Factory

Louisville Slugger Museum is full of interesting conversation starters, and that makes it ideal for daters. You can bond with your date over a practice session in the batting cages or an informational tour of the factory. And you can get a personalized bat to commemorate your time together. Whether you’re going out on a first date or about to step up to the plate to propose, you’re sure to enjoy a memorable and engaging time at this world-renowned destination.

“It feels great that our little corner of the world is helping people make these connections,” Anne said. “Louisville Slugger is a brand that’s near and dear to the hearts of a lot of people. It’s up to us to create those wonderful memories with them.”