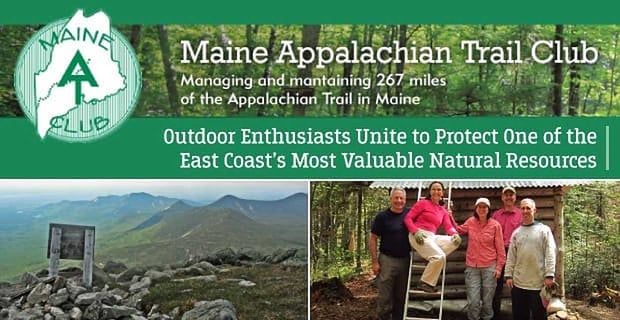 The Short Version: With a footpath extending through 14 states and more than 2,170 miles, the Appalachian Trail offers visitors wild, scenic, wooded, pastoral, and culturally significant mountain lands of the eastern Atlantic states. Each mile of this beautiful trail represents responsibility to the stewards of the land. Established in June of 1935, the Maine Appalachian Trail Club (MATC) is an all-volunteer, nonprofit organization that manages, maintains, and protects nearly 300 miles of the Appalachian Trail. Though its name suggests otherwise, MATC is not actually a hiking or outing club. Rather, it’s a group of like-minded individuals who have banded together for the protection and perpetuation of one of the East Coast’s most valuable natural resources. From Katahdin to Maine Highway 26 in Grafton Notch, MATC is not only a great way to pay homage to Mother Earth; it’s also a great way to connect with people who have similar interests.

It’s no wonder the dedicated members of the Maine Appalachian Trail Club (MATC) have been passionately advocating for one of New England’s most valuable natural resources since June 18, 1935.

The Maine Appalachian Trail Club has been around for than 80 years and has kept a steady membership of volunteers from all over the world.

“Right from the beginning, our mission of the club was to go out and work on the trail across Maine,” said Lester Kenway, President of MATC. “And our evolution has followed that pretty closely.”

Considered the wildest, most remote, and beautiful section of the Appalachian Trail footpath, the Maine trail takes adventurers through the summit of Katahdin past the Katahdin Stream and Daicey Pond campgrounds of Baxter State Park. Then they’ll go through the vast forested lake country past Rainbow, Nahmakanta, Pemadumcook, and Jo Mary Lakes. Lastly, the route climbs to the summit of White Cap and the side trail to the tumbling waterfalls of the Gulf Hagas gorge.

A canoe ferry and traverse of the 4,000-foot summits of the Bigelow, Crocker, and Saddleback Ranges nearly complete the trip before reaching the New Hampshire border. “We are focused on the 267 miles of the trail in the State of Maine,” Lester said. “Most of our members live here and enjoy the variety of environments that we have; the ocean, mountains, and lakes.”

From Reconstruction to Repair, Volunteers Maintain the Trail

Thanks to the Maine Appalachian Trail Club, people can get involved year-round in many different ways.

“One level of volunteerism is what we call trail maintainers who accept assignments to maintain a portion of the trail,” Lester said. “Right now, we have 115 different assignments that cover 267 miles of the Appalachian Trail. They clear brush, maintain paint blazes, and put up signs.”

MATC’s backbone is its hundreds of passionate volunteers who do everything from picking up trash to putting up signs.

Some volunteers focus solely on maintaining trails, while others are fixated on monitoring corridors. Then there are those who simply make sure the campsites are in tip-top shape.

There are also volunteers who can no longer take to the trails for recreation, but they still want to support MATC. Levels of giving range from an annual contribution of $100 for the Old Blue Level to $10,000 and up for the Katahdin Level.

“We couldn’t achieve everything that we do without the generous support of people who are passionate about the natural beauty and importance of the Appalachian Trail in Maine,” Lester said.

The Club is Nearly 1,000 Members Strong

Approximately 850 people make up MATC, and Lester said that number has remained pretty steady over the years — which is wonderful for such a niche club.

“About one-third of those people do not even live in the State of Maine, and some are even international. Many of them are people who have enjoyed the trail in one way or another,” he said.

Some of the most difficult work that MATC’s trail crews do is building stone steps, water bars, and bog bridges.

About 30% of MATC’s membership is constantly changing, Lester said, and, within that group, about 450 members go out and work on the trail. He continued, “I would say at least half of these people go by themselves or with one or two friends or family members.”

Becoming a member of the Maine Appalachian Trail Club is easy. You can pay online with a credit card or mail in a renewal form and check. Annual membership dues are $15 for an individual, $20 for a family, $25 for an organization, and $500 for a one-time Life Member fee.

“We also have a host of volunteer positions,” said Lester. “We have a volunteer executive board. We have people who work on the guidebook, landscape protection, and campsites. Those folks are meeting a lot and leading projects on the trails. I think there’s a lot of personal satisfaction for everybody who’s involved.”

MATC’s popular summer Trail Crew Program provides an opportunity to work on some of the most pristine, remote sections of Maine’s Appalachian Trail. It’s open to people 18 years and older who are enthusiastic, energetic, and adaptable to a changing environment. The program starts June 22 and runs through Aug. 23, and its benefits include everything from making new friends to staying in mountainside campsites.

“Most of the people come from east of the Mississippi River in the United States,” Lester said. “We get some from the west, and we get people from France, Belgium, Germany, and South Africa. Half of our volunteers are under the age of 30 — mostly students on break — and a quarter are retirement age. There are some very healthy 70-year-olds out there.”

MATC’s Trail Crew Program usually starts in late June and runs through late August, and it’s mostly made up of mature adults.

With a base camp on an island in the town of Dover-Foxcroft, crews stay in wall tents when they’re not hard at work on the Appalachian Trail. On recent projects, the crew has done everything from construct rock steps on the south sides of Saddleback and Barren mountains to install hundreds of feet of cedar bog bridges near Gulf Hagas.

“The smallest demographic of volunteers for our trail crew is in the 20-to-50 zone, which makes sense since people in that age group have families and jobs and not a lot of time to go out in the woods and work on the trail,” Lester said. “Our club leadership is dominated by people over 50. It reflects the nature of our area where retired people have extra time and a lot of experience.”

Saving Maine’s Beauty & Heritage One Mile at a Time

It’s been more than 80 years since the Maine Appalachian Trail Club’s inception in 1935. In that time, the organization has made a large impact on the landscape and natural beauty afforded by the State of Maine.

“The character of the trail is very much out in the woods,” Lester said. “Some people refer to it as wilderness, but that’s not entirely accurate. The big impact is that the trail was laid out and maintained. It has continued to be maintained by volunteers. Without that effort, the trail across Maine would simply not exist.”

“We are planning to build what we call the trail center in Skowhegan, Maine, which would not only be the trail crew home and a base of operations, but a place where people can learn skills and training for building trails around the state,” Lester said. “One of our goals is to attract more people to the club, particularly, a fair amount of younger people.”

So whether you’re young or old, able to hike or not, there are plenty of ways to get involved with the Maine Appalachian Trail Club and similar nature-focused volunteer organizations.